Hunters have an obligation to make sure their game meat is cared for and used, even when hunting far from home.

Once upon a time, a hunter hoisted his deer over a saddle and led the horse home proudly. Or he merely dragged it from the woods to shed or smokehouse. Then came decades of carrying game home on fenders and hoods, with the carcasses slowly cooking atop big Detroit motors.

Nowadays some of us are lucky enough to lay our game in the back of a cool pickup bed for the trip home, but, increasingly, many of us fly to our hunts, and that throws a wrench in the works. How do you get raw steaks, chops, ribs, and roasts from Alaska to Alabama?

To the embarrassment and shame of the fine traditions of hunting, most outfitters provide elaborate trophy care, directing clients to expediters and taxidermists to assure hides and horns get prompt and professional treatment, yet they ignore meat. Prior to a hunt last fall, our outfitter provided a page replete with names, addresses, and phone numbers for taxidermists. Not a sentence was devoted to meat. This overemphasis on trophies plays into the hands of antihunters and gives nonhunters more reasons to question our sincerity when we claim we hunt for food as much as antlers. It’s time we put our meat where our mouths are.

On a recent hunt, my partner and I were shocked when our guides tried talking us out of taking the quarters from the moose we’d shot. “No one’s ever taken any home before,” they insisted.

“Are you kidding? This is moose, the beef of Alaska! It’s fantastic eating.”

“Not this rutted, stinking bull. It’ll be disgusting.”

“We’re taking it. All of it.” Grudgingly, they started helping us butcher and pack, but didn’t give up trying to convince us to abandon an entire shoulder (because the bullet had gone through it) and a ham (because there was some contusion damage, probably from a fight with another bull). We trimmed away small amounts of bloodshot meat to reveal perfect muscle underneath.

The final straw broke when we pointed out the tenderloins. “We ain’t going into the guts for that!” the guides howled. We showed them how to reach them by sawing through three ribs and the spine without touching the internal organs. For three nights in moose camp, we gorged on some of the world’s finest red meat, introducing our poorly educated guides to the delicacy. We suspect they won’t be abandoning moose tenderloin in the woods again.

This abdication of responsibility for bringing the fruits of harvest to the table continued back in town, where we found no facilities (boxes, coolers, freezers, etc.) for assisting successful hunters with getting their game home. Everyone we queried seemed dumbstruck at the very idea, despite living in a gateway to the wilderness through which dozens of big-game hunters passed each fall, dribbling money in their wake.

With the generous assistance of a local woman who handled trophy transfers for area outfitters, we ultimately packed the meat in boxes and coolers and shipped them home, where the “rutting, stinking” moose proved satisfactorily delicious.

If you, too, hope to enjoy the gustatory rewards of your field labors, plan early and carefully, beginning with your guide/outfitter. Let it be known you are collecting meat as well as memories. Ask what, when, and how the outfitter intends to help you preserve and transfer said flesh from camp to airport. Coolers, temporary storage, complete processing services, shipping boxes, shipping services—whatever they are, be sure to arrange things well ahead of time.

What follows may prove a bit “earthy” for genteel readers. Buck up. Blood and guts are the reality of hunting, eating, and living for everyone, even vegetarians (who merely remove themselves as far as possible from the death of the animals sacrificed to grow their vegetables). If you can’t stand thinking about dismembering animals, you shouldn’t be hunting.

It is perfectly acceptable and fairly economical to ship raw game meat as checked baggage on commercial flights. Since you’ll likely have at least two bags of gear already, you’ll pay an extra baggage fee and/or overweight fee for additional coolers, usually $50 to $100 per item. Airlines vary in this, so check their Web sites carefully. It doesn’t hurt to print out this information in case the agent checking you in has different ideas. Generally you can fly meat home for between $1 and $2 per pound.

Because weight matters, you should trim carefully, removing bones and fat. Often game hangs in camp long enough to develop a protective, dry surface layer. Sometimes surfaces get a bit “high,” as the polite call it. Don’t assume this has ruined everything. Old hands who understand the value of hanging game to age it know that beneath any ripe surface lays perfectly healthful, tender, tasty meat. I’ve personally trimmed as much as an inch of overly ripe meat from moose hams to uncover the finest roasts my dinner guests have ever praised. Area foxes and magpies found the trimmings equally satisfying. In Nature, nothing is wasted.

Because meat is dense, a small cooler will easily handle 50 to 70 pounds–but check with your airline to find out the maximum weight allowed. One trick is to pack your clothing into such a cooler, along with a thin duffel bag, when flying to the hunt. On the return, transfer the clothing to the duffel and use the cooler for the meat. This saves buying another cooler locally (if you can find one.) Carry a roll of duct tape for sealing the cooler lid after it’s inspected. As additional precaution against leaking, place meat in strong, unscented leaf bags and seal them tightly before placing the works in the cooler. Ice, dry or wet, is not permitted. Don’t fret over this. Once meat has been thoroughly cooled and its surface dried, it will remain good within a cooler at room temperature for several days. To test this, trim the surface away at home and sniff the meat beneath. It should smell fresh.

Highway travel makes meat hauling simple. Fill your coolers and head home. Unless weather is unusually warm, ice isn’t essential, but if you insist on it, place it on the bottom of the cooler with the meat wrapped in waterproof plastic bags. Getting meat wet encourages bacterial growth. Keep it dry.

If your game promises more edible bulk than you can handle, determine to whom you can donate the extra and how this will be accomplished. Many outfitters have standing arrangements with local food banks, families, or Hunters for the Hungry organizations. Some require processing fees for this service, others include it in the cost of the hunt. Be prepared to cover the cost. Last fall, Scott Denny of Table Rock Outfitters in Cheyenne helped me donate a mule deer to a facility that made jerky and shipped it to our troops overseas. Outfitters in wilderness areas usually know rural families who welcome donated meat. Sometimes guides eagerly take it for themselves and friends.

A neat, simple solution is to have your game processed locally and shipped to your door. Most big-game country supports mom-and-pop butcher shops ready to convert your game into steaks, roasts, burger, jerky, and sausage. Ask your outfitter for recommendations, but check them out carefully. Ask for references: Some sloppy butchers grind dirty meat and hair right along with clean meat. A few still mix various hunters’ game, doling it out by weight rather than ownership. If you bring in 200 pounds of well-cared-for elk meat, you might get back 160 pounds of someone else’s less-than-clean elk meat.

Such shenanigans inspired me to start processing my own meat thirty years ago, but last year, on recommendation from outfitter John Way of Paws Up, I left an elk with wild game butchers in Missoula and was pleasantly surprised. My elk was aged, trimmed clean, cut, and ground to perfection.

Shipping charges for finished meat can be steep. The stuff is heavy and should be shipped overnight or second-day air to prevent spoilage. You never know in which hot room or truck a box of burger might languish. Check FedEx and UPS before shipping meat. 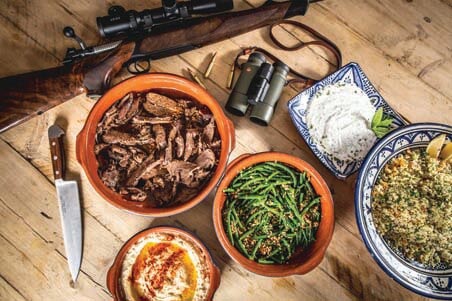 Prepped for the Pristine!