The saying on the street, especially among folks who haven’t been there, is that African hunting is too easy, just a matter of driving around and shooting animals. There’s some truth to that here and there, although in all cases ethics and in many cases law precludes shooting from a vehicle. It’s also true that much African hunting is pretty cushy, certainly compared to North American standards. Usually you’re hunting from a comfortable, well-appointed camp, and African outfitters have a huge advantage that doesn’t exist in many regions: Available help! Often there’s more than is really needed, because creating employment is part and parcel to maintaining hunting areas.

The average safari in East and Southern Africa is conducted from a comfortable camp, well-supplied and ably staffed. Yes, they do laundry every day and, yes, much hunting is done by driving until actual animals or fresh tracks are spotted. Then things change. No two hunts are alike, and any hunt can turn into an all-day ordeal. Buffalo and elephant usually require serious tracking, but almost any animal can occasionally be taken just by stepping out of the truck.

No different than hunting whitetail deer or anything else, you never exactly how a hunting day is going to play out, but if you really like to work for your game, and you think Africa sounds too easy for your tastes, there’s another side to it. Think about getting off the beaten track and hunting in Central and West Africa, where currently ten countries are open to hunting, about half the continent’s total of hunting countries. Although there are broad transitional zones, there are two primary habitat types: From northern C.A.R. and Cameroon and southern Chad westward across northern Benin and Burkina Faso all the way to Senegal lies a wide belt of sub-Saharan thornbush and savanna; below that, from southern C.A.R. and Cameroon and both Congo’s westward through Liberia, Sierra Leone, and Guinea lies the true forest zone. 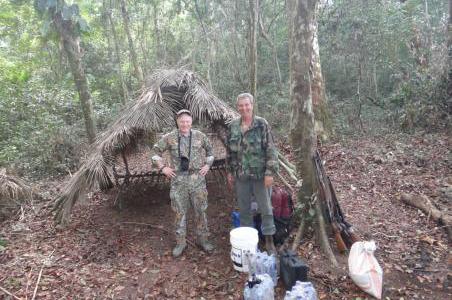 Boddington and Ralf Schneider at their first “spike camp” in the Liberian forest in 2013. African camps vary a lot, but this was pretty much at the bottom of the scale!

Conditions vary considerably. In most of these countries genuine professional hunters and real outfitters have concessions, so the conditions have some relationship to African hunting elsewhere. Uniquely, some of these countries allow “chasse libre”—“free hunting”—whereby it’s possible to rent a hunting block, hire a vehicle and help, and do it yourself. In some areas it’s a bit of a blend, where you can work from established camps through an “outfitter,” but you’re actually hunting with local hunters and trackers, absent a “professional hunter” as we know the term. Regardless of the exact circumstances, this entire region has one thing in common: This is Africa’s tough stuff, “extreme Africa” if you will.

Logistics are difficult throughout this region, so camps tend to be rougher and supplies harder to come by. The weather is generally much hotter and, unlike southern Africa in the long dry season, in the forest zone rains can be expected. This is good and bad. Bad: Mobility can be severely impacted. Good: A shower brings relief from the heat and, more importantly, forest animals love to move just after a rain…and tend to hunker when it’s dry and the forest floor is noisy. (The old adage in the forest is “no rain, no bongo.”)

Species diversity tends to be less than in southern Africa, but a lot of these areas still hold lots of game. Part of the attraction, too, is some of Africa’s great prizes: Derby eland and western roan in the north; bongo and forest sitatunga in the south. Buffalo of three varieties remain widespread, and there are pockets of both lions and leopards (neither currently importable to the USA). Of great importance to long-gone African nuts, the region holds a wide variety of pygmy antelope not found elsewhere: in Ghana, the tiny royal antelope; in Liberia, a selection of little guys including zebra duiker and water chevrotain. Pigs, too; warthogs in the north, giant forest hogs in the south, and the red river hog widely distributed.

This is a western kob, one of several animals available in northern Cameroon at reduced cost–much less expensive than a Derby eland.

So there are many reasons to hunt this part of Africa beyond simply proving how tough you are. But let’s be clear: This hunting is not for everyone. Not everybody is going to like it, not everybody is in adequate condition for it, and this is not a good region for inexperienced hunters. A few examples. Just a couple of years ago, on a blistering March day in Burkina Faso we wounded a buffalo at daybreak. We eventually got it, but that morning we stayed on the track longer than we should have, and when we broke off at midday it was an honest 130 degrees. More than twenty years ago, when I was a lot younger, we took the track of a Derby eland bull just after dawn. We got the shot at eleven, but it was another imperfect shot. We stayed on the track and got him at about five o’clock, and it was a long, long way to the truck. In both cases straighter shooting would have shortened the days, but the point is this is a region with no fences, few roads, and no shortcuts.

There is also an essential knowledge base. I’m halfway through my second hunt in Liberia, which I would call a semi-guided hunt. The camp is OK and the people are great—and excellent forest hunters—but there is no hunting tradition here. It’s very hot and very humid, a deadly combination for the meat and hides, and although the guys are willing, they are unskilled in preparing skins for taxidermy. So my hunting partner, Mike Adams, and I have been spending at least a third of each day helping with and supervising the skinning, changing salt, and fussing over the skins.

Timewise, this is not a huge problem here because most of the small forest animals we’re hunting are nocturnal, so a lot of the hunting is at night. But unless you know skinning, including turning the ears and splitting the lips, and how to preserve skins in an unfavorable environment—and you’re willing to pitch in—chances are you’ll be disappointed when your taxidermist gets your skins.

Even at that, this safari is a vast improvement over my first hunt in Liberia three years ago. Then, although base camp was similarly comfortable, there was no game in proximity to camp. So we had to spike out a half-day’s journey, then sleep in hammocks or makeshift shelters, returning to base camp when we ran low on food. This year, in a new area, we can walk from camp and find game.

The do-it-yourself (chasse libre) safaris in this region are a whole different order of magnitude. I’ve avoided them for practical reasons. First, I don’t speak French, and that’s the common language of Central and West Africa. Absent reasonable fluency in French, difficulties are compounded. Second, it has seemed to me that these hunts are costly (in both time and money) in relation to success achieved. Which perhaps reveals a personal character flaw: The adventure sounds great, but I also want results!

On the other hand, Sports Afield’s Publisher, Ludo Wurfbain, is a huge fan of the chasse libre safaris, and has done a number of do-it-yourself hunts in several countries in the region. Over the years he has achieved amazing results, and has taken most of the key game in the region, but usually just a couple of animals per safari.

The region has a reputation for costly outfitted safaris, and this is absolutely true if you’re after either of the two great prizes, bongo or giant eland. Take those off the list and safari costs in C.A.R. and Cameroon go down dramatically. Move a bit farther west to Benin and Burkina Faso, and you can find the least expensive buffalo hunting on the African continent. The hunting in Liberia is so specialized that you have to be a pretty far-gone African addict to be interested, but the safaris are not expensive and government trophy fees are low.

On my first hunt in Liberia I was fortunate to share camp with another chasse libre veteran, Ralf Schneider. The Liberian hunt was actually one of his first outfitted hunts in years but, like me, he wanted a zebra duiker and a water chevrotain. Like me, he got neither, but persistence sometime pays. Hunting with the same outfitter, Morris Dougba’s Liberia Forest Safaris, I shot a water chevrotain and a zebra duiker on my current safari. But here’s the point: Ralf is an expert in this weird region of Africa, and I learned a lot from him. I knew to bring essentials like a hammock to sleep in (off the ground and away from creepy-crawlies), water purification tablets, headlamps, and good skinning knives. I also knew to bring niceties like a battery-powered fan, electrolyte mixes, and some goodies just in case. Ralf brought preparation to a new level. His “emergency safari kit,” sealed in a waterproof five-gallon bucket, was a treasure trove: backpack stove, raingear, bivy sack, tea and coffee, Top Ramen, and maybe even a wee nip of something. He could survive for weeks just out of his bucket!

I paid attention. On this hunt I haven’t needed the hammock, water purification tablets, or the freeze-dried emergency rations I added to my kit, at least not yet. But we’ve used most everything else! We’ve also sweated a lot and put up with some frustrations. But the skins on the drying rack tell the tale. The forest has been good to us! 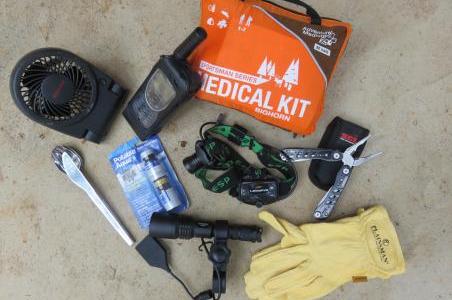 For extreme African hunting it’s important to pack very carefully, and include some items you may not have thought about. Clockwise from top: A good first aid kit (this one from African Sporting Creations); multi-tool; gloves (against bugs or thorns? You never know!); an array of lights, for both night-hunting and functioning safely in the dark . . . these are the Spanish-made LEDWave lights; silverware and water purification tablets; a battery-operated fan (with lots of batteries), an incredible blessing in tropical climates; and a satellite phone, essential for emergencies and easily rented with plenty of minutes.