These magnificent mountains in southern Alaska are a sheep-hunter’s mecca.

The state of Alaska is larger than many countries. You’d need a fat book, if not a small library, to describe all of its lands and many hunting opportunities.

Let’s limit our exploration to just one small corner of The Great Land, the Chugach Mountain Range, which covers an area “only” 300 miles long by 100 miles wide, running west to east from Anchorage to the Canada border. That’s roughly 30,000 square miles of floor space and considerably more if you add the vertical terrain—and most of the terrain is vertical.

These young, rugged mountains leap from the east edge of Anchorage and heap one atop another almost nonstop to the Copper and Chitina River valleys on their northeast edge. Many peaks stretch above 11,000 feet. Mount Marcus Baker towers to 13,176 feet. Such elevations tend to wring moisture from the air, and there’s plenty of moisture blowing up from the soggy south coast of Prince William Sound and the Gulf of Alaska. An average of 600 inches of snow falls in parts of the Chugach Mountains each year, one of the highest totals on earth. Prince William Sound averages 150 inches of rain annually. Both the Chugach Range and some of its 150 glaciers plunge hundreds, even thousands of feet into the sound, creating a formidable barrier to exploration. Nevertheless, the first highway into Alaska’s interior passed from the port town of Valdez through the heart of the Chugach Mountains.

Valdez, which might be more accurately named Valdez-aster, given its history, was christened by Spanish explorer Salvador Fidalgo in 1790, an odd reminder of the once long arm of Spain. In those days the Russians and British were also prying into the coastal corners of recently discovered Alaska, mostly bent on extracting furs. Americans didn’t really get involved until after the Civil War, when Secretary of State William Seward convinced Congress to vote 2.5 cents per acre to buy Alaska from cash-strapped Russia, then stinging from the expenses of waging its Crimean War against France and Britain. “Seward’s Folly” indeed!

Ice-free Valdez didn’t amount to much until 1898, when construction began on the Richardson Highway, the first road leading north to interior gold fields near Eagle and later, Fairbanks. The Alaska railway from Anchorage to Fairbanks stole much of this traffic by 1920 and the ALCAN Highway stole more after World War II. Valdez settled into life as a sleepy fishing village on the ragged but visually stunning edge of the vast Chugach Range until its first disaster. On March 27, 1964, a 9.2 earthquake, the second-biggest ever recorded, sent a 220-foot wave through Valdez Inlet. A big slice of the waterfront fell into the bay. The remains of the village were moved to more solid ground four miles away.

By the late 1970s, Valdez was again booming thanks to construction of the Trans-Alaska pipeline and its terminus at Valdez. Tanks there store more than 9 million barrels of oil. On March 24, 1989, three days shy of twenty-six years after the 1964 earthquake, the Exxon Valdez departed Valdez oil terminal and struck Bligh Reef, spewing roughly 500,000 barrels of crude oil into the sound.

Despite all these man-made developments, plus the growth of Anchorage on the western edge of the Chugach, virtually no development occurred within the mountain range itself. There were no major ore discoveries, no more highways nor railroads built, no farms or ranches or cities established. The Glenn Highway was laid along the Matanuska and Tazlina Rivers on the north edge of the range, but the mountains themselves remained the lonely haunts of the wilder denizens of Alaska, in particular Dall sheep, the Chugach’s claim to fame.

The second-largest Dall ram ever recorded by Boone and Crocket was collected in the Chugach Mountains by Frank Cook in 1956. Its right horn, the longest ever measured on a Dall, curled 49 4/8 inches from a 14-inch diameter base. If some five inches hadn’t been broomed from the left horn, Mr. Cook’s Chugach ram would stand as the world’s best.

The third and fifth biggest Dall came out of the Chugach, too. To this day, hunters lust after a chance to pursue a dream Dall of their own in the Chugach. It isn’t easy. Permits to hunt a mature ram must be applied for and won in an annual lottery, and nonresidents must hire the services of an experienced guide/outfitter. Given the size and severity of these mountains, a guide is a wise investment. There aren’t many gentle valleys, but plenty of steep cliffs, rockslides, fog, blizzards, and 150 glaciers. Big glaciers. The Matanuska Glacier is twenty-seven miles long and four miles wide. The Tazlina and Columbia glaciers are even larger. This is no region for the unprepared or timid.

The bulk of the Chugach’s sheep, and the best of the rams, are concentrated in Game Management Units 14C and 13D, plus the Knik Glacier corner of 14A. 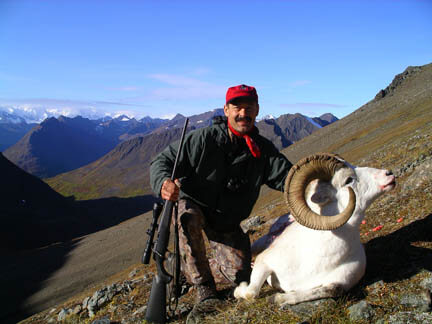 A magnificent Dall ram taken in the Chugach Mountains.

The southern and eastern sections of these mountains are too wet and snow-covered to support sheep. Here, according to Dave Crowley, Cordova area wildlife biologist for the Alaska Department of Fish and Game, mountain goats predominate on the cliffs and alpine regions. Black and brown bears roam the coast and the dense Sitka spruce and hemlock rainforests of GMU 6. Black-tailed deer flit through coastal forests on several islands. Ten-inch goats with lush pelts are common, but not where they are easily accessible. You’ll need a guide “in the know” with the ability to get you into the back corners for a trophy.

Crowley said brown bears run eight to nine feet here, smaller than on the Alaska Peninsula and Kodiak Island, but tags are easy to obtain and the season is long. Black bears are also plentiful, and moose, though not abundant, are big in the Copper River Delta area.
“There may be only about 1,200 moose, but in GMU 6A over the last years, the antlers I measured went from an average of 60 to 69 inches,” Crowley said. He also noted there were no caribou at all in GMU 6. A few are hunted in GMU 13, the northeastern slope of the Chugach, by permit only. Wolves, wolverines, and interior grizzlies round out the big-game species.

Other wildlife includes pikas, marmots, snowshoe hares, and ptarmigan. In the deep fiords and in the sound swarm five species of salmon, halibut, sea otters, seals, sea lions, and whales. The 700,000-acre Copper River Delta hosts the largest spring concentration of migrating shorebirds in the world, some thirty-six species, and the world’s entire population of dusky Canada geese nest in the area.

Taken as a whole, the Chugach country is a representative cross-section of Alaska’s natural riches, and one of the world’s great sheep-hunting destinations.

Quiet Slice of Heaven Parcel A

The Banks of the Old Kootenai