It was midday, and most of the wild pigs on southern California’s sprawling Tejon Ranch were bedded down in heavy brush and steep canyons. Most of the hunters in our party had taken their cue from the pigs and headed back to the cabin for a snooze. But Myles and I weren’t ready to quit yet, and our guide, Bryan, had an idea.

He stopped the truck across a shallow creek from a narrow ravine that cut down one of Tejon’s steep, grassy hillsides. About a third of the way up the ravine was a small, thick patch of brush.

“I often see pigs bed in that brushy patch,” Bryan said. “I think if we post one person on the lower side, and two of us walk into the brush, we might kick some out.”

Bryan had his work cut out for him, since Myles and I were handgun hunting. We’d already had to pass up several shots at pigs that were beyond the range of our big revolvers, and I could tell Bryan was getting a little frustrated at our limitations. I, however, was enjoying the hunt immensely. Carrying handguns was forcing us to really make use of our hunting skills as we tried to get within fifty yards or less of Tejon’s hyper-alert hogs. Had we been hunting with rifles, we’d probably both have tagged out the day before.

The sun was out for the first time in several days, although huge, puffy clouds hinted that it might not stay that way. Tejon’s 4,000-foot mountains had seen heavy rain for days and the upper elevations, where our cabin was situated, had received six inches of snow in the past twenty-four hours, surprising Myles, who had flown in from Michigan for this late-March hunt. 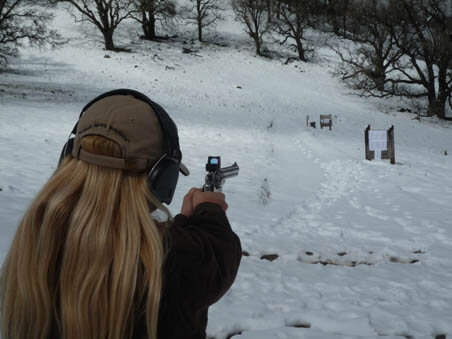 Proof that it really does snow in southern California!

“I thought this was southern California, but I must have landed in the wrong place!” he laughed. We’d subsequently dubbed this the “Polar Pig Hunt,” but most of our actual hunting time was spent down in the valleys, which were green and lush from heavy rains but untouched by snow.

We crossed the creek and walked into the bottom of the steep ravine. The wind was perfect for our little push. Somewhat selfishly, I volunteered to take the post below the brushy patch, figuring it would yield the best chance for a shot if the pigs came trotting out. I extended a Bog-Pod to its standing position and rested the scoped, 6-inch .44 Smith & Wesson revolver on it, testing to be sure that I could swivel easily to all points of the compass. Satisfied with my setup, I nodded to Bryan and Myles and they slowly climbed toward the patch of the brush, easing around above it. They’d enter from the upper side in hopes of dislodging any pigs that might be in there.

The ravine fell silent after they left, except for the chirping of a few songbirds. I watched the brushy patch carefully, but I was thinking about how nice it was to be out hunting again after a long winter. Pig hunting in my adopted home state of California is one of my favorite spring rituals. This hunt was particularly fun, since I was joined on the trip by several old and new friends. I had just met Myles, a sales rep for Trijicon, and we were getting along great. My friends and frequent hunting partners Dick Williams, Paula White, and Sammy Reese were sharing the cabin with us, and Sammy’s son Mason and Dick’s co-worker Alicia Lin rounded out our crew. All of us had taken on the considerable challenge of trying to bag a pig with a handgun, except for Alicia, who was rifle hunting, and Mason, who was just waiting impatiently for the day he’d be old enough to hunt a pig of his own.

Myles had fitted several of the revolvers with Trijicon RMR sights, including the .460 S&W Magnum he planned to use. All the .44s with the tiny red-dot sights had been spoken for this morning, though, so I had borrowed Dick’s gun, which was fitted with a 1.5-4X scope. The red-dot sights had seemed easy enough to use when we’d sighted in the guns during a heavy snowstorm yesterday, but being a handgun newbie, I thought maybe the scope would be even easier.

I was jolted out of my reverie by the heavy boom of Myles’s .460 echoing out of the patch of brush and through the narrow ravine. Get ready! I thought, and just as I did, four pigs burst out of the brushy patch at a brisk trot. After a millisecond of surprise that our plan had worked to perfection, I trained the revolver on the pigs, which were trotting rapidly past me, single file, at less than twenty yards. To my horror, I couldn’t find them in the scope! As I desperately moved the unfamiliar gun and finally caught the trailing pig in the cross hairs, only his broad behind and longish tail was visible as he crested the rise and was gone. I raced up to the top of the rise and this time found them in the scope, but they were now well out of range.

Myles and Bryan emerged from the brush, pleased with themselves and wanting to know why I hadn’t shot. I confessed to my failure to get my scope on a pig, sheepishly admitting that I would have been much better served with a red-dot or open sight on such close-range, fast-moving targets. 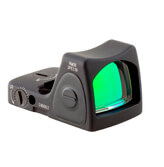 Trijicon’s RMR sight: better than a scope for quick shots at close-range, fast-moving targets, as I discovered.

Myles and Bryan had sneaked in and surprised the group of pigs, and Myles had dropped his with a perfect shot at less than fifteen yards. The 6.5-MOA red dot from the RMR sight provided an ideal aiming point on the black pig as it stood in heavy shadow, and the 200-grain CorBon XPB spitzer from the massive .460 had put the pig down for good. It was Myles’s first handgun kill, and I couldn’t have been happier for him. As we took photos, he offered to let me hunt with the .460 for the rest of the day, and I jumped at the chance.

Myles Waterman with the fine wild hog he bagged with the .460 S&W.

After a quick lunch break, we spent the afternoon making some more pushes through patches of brush with the help of a couple of “pig dogs,” gutsy terriers owned by the guides who were trained to find and bay wild pigs. But when we finally busted a group of pigs out of a briar-choked streambed, the pigs ran ahead of the dogs and left them far behind as they headed into the grassy fields. The strategy worked well enough for our purposes, however; once the group was out in the open, we could go after them. 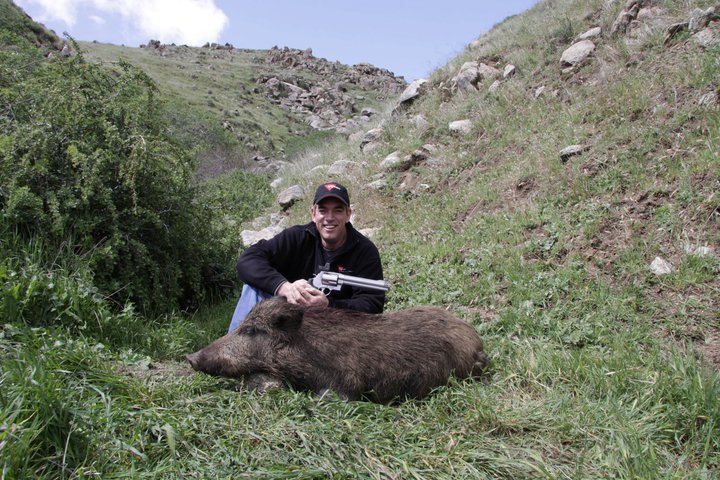 The end of shooting light was rapidly approaching, so we had to hurry. We closed the distance both via the truck and on foot. At one point Bryan, Myles, and I performed a rather comical foot race, splashing across a rushing creek, running through a field, and clumsily hurdling a barbed-wire fence as the hogs worked their way into a field bordered by pecan trees. When we finally got close, there was no time to waste.

“Shoot the big black one if you can,” Bryan urged.

The big sow was standing obligingly broadside, some twenty-five yards away, with the other pigs milling nearby. There was no confusion over sights this time—the big orange dot of the Trijicon gleamed brightly against the pig’s shoulder in the gathering dusk. At the resounding boom of the .460, the pig bucked and staggered, then trotted across the field, toward the trees, and stopped, head low. Hit hard, it would likely have gone down, but I didn’t want to take a chance, especially so close to dark. The pig was now beyond my effective range, however, so at my urging, Bryan put the finishing shot into it with his rifle. The massive dry sow weighed more than 250 pounds and would yield a freezer full of pork roasts and sausage.

We finished up the hunt the next morning with five pigs on the meat pole, four of them felled with the RMR-equipped Smith & Wesson revolvers. Pursuing wild pigs with handguns had been a new and interesting challenge for all of us; a rewarding one we hoped to repeat soon. 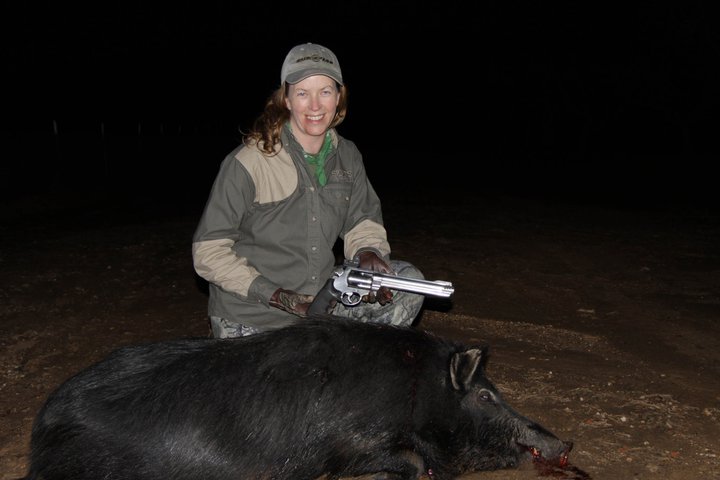 I took this 250-pound dry sow with the .460 S&W. The Trijicon RMR sight on the revolver was invaluable as my shot opportunity happened right at dusk.

I learned something important about shooting revolvers when I touched off the shot at my pig. I’m an experienced rifle hunter but this was only my second handgun hunt, and as I focused on my quarry right before the shot, I did something I should never have done. In an attempt to get a solid rest for the revolver against a fencepost, I moved my left hand from its proper place on the grip to a position slightly forward and underneath the cylinder—unconsciously mirroring the hand position I would have used with a rifle.

When I touched off the shot, a blast of hot gas from the cylinder gap hit my index finger and thumb, which were positioned much farther forward of where they should have been had I been gripping the gun properly. Fortunately, I was wearing high-quality leather shooting gloves, which protected my hand, and the damage was limited to a burned glove and a lightly singed finger.

Anyone who shoots any kind of revolver should realize that this can happen, but it’s especially important to remember when shooting extremely powerful calibers such as the .460, where the blast is nothing to trifle with. The fault was entirely mine as I was not using proper handgun-shooting technique, and it’s a mistake I will certainly never make again. Wearing shooting gloves is not a bad idea, either.—D.R.