What to bring on your African adventure

I do an awful lot of packing and unpacking, and I don’t take much time doing either. But even after thirty years and sixty-odd African hunts I still get a special thrill when I pack my safari gear. So although I don’t spend as much time as I once did in actual packing and repacking, I spend quite a lot of time thinking about the gear I’m going to take. This is part of the anticipation, just like a ritual rereading of classics like Horn of the Hunter and Green Hills of Africa—and studying the appropriate country sections in Safari Guide II.

It also makes sense to plan carefully, because having the right gear is important to the enjoyment—and sometimes success—of any hunt. That said, an African hunt is probably one of the least gear-intensive hunts in the entire world. I tend to overpack, but with baggage limits dropping and overweight charges escalating, this year I’ve made a New Year’s resolution to pack lighter. Maybe I really will!

In almost all African camps they really do laundry every day, so you can get by with three sets of hunting clothes. There was a time when a coat and tie (or, for the ladies, a genuine dress) was almost mandatory if you wanted to have a nice dinner in an African city coming or going. Old habits die hard, but things are a lot more casual today. I can get by just fine with two long trousers and two shorts, two short-sleeved shirts and two longs—and I’ll travel in one set.

Gone, too, are the days when camouflage was specifically illegal in many jurisdictions. Some hunters wear it today, and (horrors) I even see the occasional younger professional hunter wearing camo. I prefer not to. It works just fine, but isn’t traditional, and I’m one of those old fossils who believes tradition is important. A good neutral green works just as well, and in Africa I feel more at home so dressed. Note: Green is a departure from the old classics that would have us dressed in khaki. Remember that most of the great African literature came out of East Africa, where much hunting was done in grassy plains. You can still get by just fine with khaki in areas like the Kalahari and the Karoo, but in the thornbush that blankets most modern hunting country tan or khaki is too light and too bright. A soft neutral green or olive drab will work everywhere.

Stick with cotton. It breathes, and unlike blends with too much synthetic it will stand up to the hottest iron. This is important, because ironing with an old-time iron filled with hot coals is part of the laundry ritual. On the surface this is a very nice touch, but it has a most practical twist: The hot iron kills potential parasites that you really don’t want to get next to.

Okay, from top to bottom. In years gone by I always took a broad-brimmed “safari-style” hat. Yep, they look great in photos, and they protect your ears and neck from the sun. Over the years I’ve taken such a hat less and less, and often when I do take one it stays in camp, because the darned things are almost more trouble than they’re worth. In thornbush they catch on everything, and they blow off in an open vehicle. A cloth cap with a brim isn’t as sexy but is far more sensible, and these days I often just wear a baseball cap augmented with lots of sunblock. I take a big bottle, nothing less than “50 SPF” for me, thank you!

Footgear is no less important in Africa than anywhere else, but the requirements are different. With some exceptions there are few real mountains to climb, so genuine hunting boots generally aren’t necessary—and their hard, aggressive soles may be counterproductive because they’re too noisy. The first requirement is comfort, enough support and enough sole to walk all day if necessary. The second requirement is a sole that is soft enough to allow quiet stalking. The last couple of seasons I’ve been wearing Russell’s “Mountain PH,” which offers more support in hilly country than the standard PH model, but either are wonderful. Another good option is plain old cross-training hiking shoes, and of course the Zimbabwe-made Courtenay boots and shoes are specifically designed for African hunting. I hedge my bets. The Russell’s go in my duffel along with a pair of tennis shoes for camp wear, and I travel with Courtenay’s on my feet.

Let’s not forget some keep-‘em-warm stuff! While the days are usually wonderful, mornings and evenings can be brutally cold in the southern African winter. I’ve been snowed on in South Africa several times, and I’ll never forget an amazing cold snap all the way up in Zambia. High country, whether Tanzania’s Masai Steppe or Ethiopia’s mountains, can always be cold. I always take a knitted sweater—quiet and comfortable—and add a windproof parka with a hood for an outer layer. I also take a wool watch cap and gloves. For camp wear, and for an extra layer if needed, I take a sweat suit. Add about four each of socks, T-shirts, and underwear, and don’t forget all the toiletries, medications, extra eyeglasses and sundry—enough to last the full time you expect to be away.

I put most of this stuff in a soft duffel bag that will be waterproof and dustproof, and will allow for a bit of squashing in a charter plane or the back of a Land Cruiser. I like the Beano bags from Red Oxx—mine are on their seventh season and seem indestructible. Now comes the carry-on. I take my computer bag with various power options. This is because my editors are merciless, and I know that I actually will find—or make—some time to write. I don’t recommend you take anything you don’t actually expect to use.

Just remember this: Your professional hunter is many things. He is your host, guide, mentor, and (hopefully selectively and sensibly) your celebrating partner. He is not your twenty-four-hour babysitter. He has a lot to do, including running the camp, managing the staff, maintaining the vehicle, planning the next day’s hunt, and maintaining his own gear. He’ll be more effective and you will be more successful if you give him a bit of space, so pack something to entertain yourself for a bit of time in the evenings and midmornings. This may mean books, magazines, cards, a well-loaded IPOD, or even a DVD player with a couple of favorite movies, whatever works for you.

I carry a daypack as my primary carry-on, and then it goes on the hunt to carry cameras and other essentials. Recently I seem to have gone through at least one daypack a year—I’m hard on them—and a problem I’ve had is the best daypacks are in camouflage, which I hate to travel with visibly. My new one for this season is from Texas Hunt Company. It’s in olive drab, and it not only has sensible pocket arrangements, but it looks like it’s going to last. Using it initially as carry-on baggage, I put in it everything that I simply cannot do without, excepting no-nos like knives and ammunition. Come to think of it, I can borrow guns and knives. What I can’t do without is camera, binoculars, any medications (which, for me, includes sunblock!), and extra reading glasses, and I throw in my sweater and at least one of changes of underwear and socks. I have had relatively few problems with baggage, but I pack my carryon as if it’s the only bag I will receive.

That’s about it, except for the guncase and ammo. The rules vary slightly from one airline to another, so you must always check with your carrier. The basics, however, are quite simple. A sturdy lockable hard case is essential. These days I like SKB and AmeriCase, stout but not too heavy. Ammo in original factory containers, less than five kilograms (eleven pounds). Mostly they want the ammo in the duffel, not in the gun case, but this is inconsistent and subject to change.

Now, when I start actually packing my bags let’s see if I can limit myself to what I’ve mentioned. I’m sure going to try! 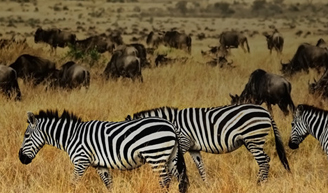