Sometimes it’s the hardships and challenges we experience on hunting trips that make our adventures truly memorable.

If you’re going to hunt in some of the world’s most remote places, you’d better be prepared for some unexpected adventures. Being a hunter with a restless spirit, I can’t seem to get enough of the both the joys and hardships that come with hunting the world’s far-flung regions. Here are a few of the most memorable tests of my “mental fortitude” I’ve experienced to date.

A Party in Pakistan

Now I don’t speak a word of the Pakistani language, but when I was stranded by weather in a high-mountain village not far from the Afghanistan border, with an official trying to extort $1,000 from me with a great deal of yelling and pointing, I understood the word “Taliban” very well.

I’ve always had a thirst for adventure in far-flung corners of the world, while unfortunately not having adequate finances to support this habit. Therefore I’m always bargain-shopping for inexpensive hunting trips, and since I have many outfitter friends I’m always the first to volunteer to be a “guinea pig” for an exploratory hunt into a new area. Sometimes these are areas where they need to see if the quality of the game is good enough, or maybe find out if the terrain is too extreme to take a “real” client. This has led to some uncomfortable, extreme, and even dangerous situations, but I’ve found that by keeping a positive mental outlook through all the trials and tribulations, the rewards can be beyond compare.

Such was the case in Pakistan. An outfitter friend of mine had a leftover tag for a Himalayan ibex. He offered it to me at a great price, and off I went to Pakistan. Upon arrival in Islamabad, I went to retrieve my luggage only to find my rifle had made the trip and nothing else. Normally that would be good news, except my ammo didn’t make it, and nowhere in Pakistan can you buy ammo for a .300 Ultra Mag. All I had to wear were the clothes on my back; luckily my thermal underwear, optics, and cameras were in my carry-on bag.

What my friend didn’t tell me was I would be hunting out of a high, remote village not far from the Afghanistan border, and I would be the first paying client ever to hunt there. I layered on my thermal underwear, kept my positive attitude, borrowed a rifle, and got a beautiful Himalayan ibex. 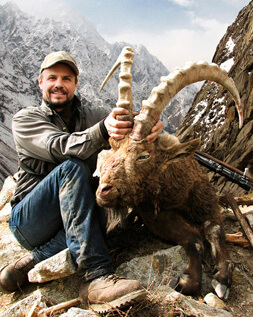 The local villagers were the most gracious hosts I’ve ever met, but the government wildlife agent who was supposed to issue me a free transport tag for the ibex wasn’t. When we went to get it, he wanted $1,000 for the “free” tag. He thought I was a rich American hunter and didn’t realize I had come on a discount “buddy” deal on a reconnaissance hunt. Not only was I not going to give him $1,000 for a tag that wasn’t supposed to cost anything, I didn’t have $1,000 anyway. That’s when he proceeded to yell that he “will have the Taliban come shoot this man!”

Well, that made things a little uncomfortable. With the weather turning bad and all flights to Islamabad cancelled, I was now stuck in a town on the Pakistan/Afghanistan border, locked away in a little hotel with outside doors so thin you could lean on them and fall through. I was told not to leave my room for any reason without my bodyguard, and to keep my curtains closed and not even step out on my balcony. Plus, I was running out of money, fast.

The next morning, I was escorted to the hotel restaurant to eat breakfast when a man came in, yelling at the top of his lungs. He went up the stairs and straight to my room! He began beating on the door to my room, still yelling. I was terrified, just waiting for the explosion, when everyone around me started laughing. It seems he was looking for his wife–who wasn’t in my room, by the way. Luckily, I wasn’t either, or I probably would have been preparing to fend off this man with my bullet-less rifle. I don’t know which is worse, the Taliban or a jealous husband!

I needed a way out of this situation, and the sooner the better. My guide made plans for me to buy a goat that would be slaughtered for a meal, arranged a musical program in the hotel, and invited some local dignitaries, including the official who was holding my ibex transport permit hostage. They arrived at my hotel room stone drunk on some local mulberry moonshine they’d brought in from the Kalish villages. They were falling over each other, laughing, yelling, and demanding I drink with them. My guide shook his head, indicating I shouldn’t drink the stuff, so I filled my glass and smiled. When they were distracted, I would slide the full glass under my bed and my guide would slide me an empty one.

After several glasses hidden successfully under the bed, they were happy and decided it was time to eat. As we stood up, one man fell and knocked over the TV. Another official got to laughing so hard he fell off the bed backward and got stuck with his head between the bed and the wall! The rest jumped on the guy who fell on the TV and we had a big dogpile of men laughing and wrestling in the middle of my room. My guide and I had to climb across them and the beds to pull the guy stuck headfirst between the bed and wall out of his predicament.

We finally had supper and attended the musical program. After having to dance with the crowd, I finally made it to my room. I was glad it was over, and the gambit had worked—I was now in possession of my transport permit! That uncomfortable yet entertaining night had saved my bacon.

But the next morning again brought bad weather. The morning flight was canceled for the fourth straight day. That left only one possible flight, at noon, to get me to Islamabad in time to make my flight out of Pakistan. Upon arrival at the airport, my heart sank at the sight of hundreds of people trying to get on this same flight. I was just standing there, feeling sick to my stomach, when here came three men who had been at the party. They introduced themselves as a local chief justice and civil justice, and the president of the airline. They thanked me for the party and the great time they had. I then told them of my predicament. Next thing I knew, I had a first-class ticket out of there. Thank goodness for moonshine and a not-so-fortunate goat!