As of January 2009, DSC’s annual convention in Dallas, Texas, was renamed Dallas Safari Club with Sports Afield Presents the Convention & Hunting Expo. Already one of the world’s greatest international hunting conventions with more than 1,000 exhibits, the Dallas show is growing exponentially as a result of the combined marketing efforts of both groups.

“We are particularly excited about the growth possibilities surrounding the convention as a result of this partnership,” said Sports Afield publisher Ludo Wurfbain. “The Dallas Safari Club with Sports Afield Convention and Hunting Expo is the must-attend event for serious hunters as well as for every major player in the hunting industry.” 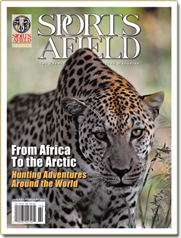 Sports Afield, the premier hunting adventure magazine, was founded in 1887. A high-end hunting and firearms magazine with an emphasis on North American and African big-game hunting and fine sporting firearms and equipment, it serves serious hunters who pursue big game around the world.

Dallas Safari Club has become an international industry leader and innovator. An active and progressive organization for the uncompromising hunter, the Club’s mission is to conserve wildlife and wilderness lands; to educate youth and the general public and to promote and protect the rights and interests of hunters worldwide. Since forming in 1972, the Club has contributed millions of dollars to programs benefiting wildlife, habitat, people and the sporting community.