How to make sure you and your rifle are ready for hunting season.

The “exams” that the fall seasons bring us can’t really be crammed for, so I hope you’ve whiled away some of the summer doldrums at the shooting range. If you haven’t, you’re coming up on your last chance to make sure both you and your equipment are ready for whatever challenges lie ahead.

This really is a two-part evolution: You and your rifle. Getting rifles ready is a series of mechanical processes that have almost nothing to do with field shooting, while getting you ready is a matter of practice. The latter is much more time-consuming and should be ongoing–but let’s first talk about rifle readiness, and then we’ll come back to practicing for hunting season.

Since part of what I do is write about guns my range time is (literally) precious, but that’s not necessarily a good thing because I usually wind up hauling a half-dozen rifles to the range. Sometimes I get to all of them and sometimes I don’t, but there’s always a priority: The shooting I absolutely must get done, and the shooting I’d like to get done. Most of you probably don’t have that problem, and I don’t recommend it; you’re better off concentrating your efforts on one or two centerfire rifles…and maybe bring a .22 and plenty of ammo so you can do some plinking while your barrels are cooling. 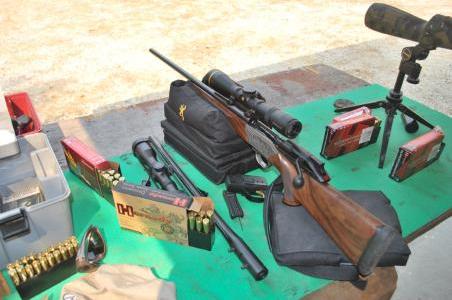 Some range sessions are more complicated than others, but make sure you bring everything you could possibly need, including wrenches and tools…and just maybe, if this is your last chance before a hunt, a backup plan in case something goes wrong.

Some of us may be fortunate enough to step out the back door and sit down at a shooting bench, but for most of us range time requires traveling some distance. So, the first thing is to make certain you have absolutely everything you need. Correct rifles and ammunition are obvious, but it’s worth double-checking. Yeah, you bet, I’ve gotten out to the range and discovered that I’ve forgotten one or another type of ammo. Of course you need eye and ear protection, targets, staples and staple gun, spotting scope and tripod, shooting rest, maybe a PAST recoil shield—or at least a towel you can fold over your shoulder. It’s okay to be a complete wimp while shooting from a benchrest, because this is all about the rifle and has little to do with you. What about a chronograph? If you’re serious about shooting at longer ranges the first step to understanding your trajectory is to know the actual velocity of your load in your rifle, so a chronograph becomes an essential tool.

Less obvious: Troubleshooting gear! Do you have all the screwdrivers and properly fitting Allen wrenches so you can check scope mount and ring screws and action screws? If you’re messing with a new rifle or one of our increasingly complex scopes with built-in range compensation, did you bring the instructions? What if a scope mount breaks or a scope goes out? Lately I’ve had a rash of scope mounts breaking at the range. Such events can’t be anticipated and it isn’t always practical to consciously bring spares. But for those times when you simply must get a certain rifle ready for an impending hunt, figure that Murphy’s Law applies. Try to think through what could go wrong, and have a solution on hand…and the tools to implement that solution.

Last, bring cleaning gear. I’m big on gun cleaning at the range. It can be done while waiting for a barrel to cool, and of course cleaning expedites cooling. Also, doing it on the range is less messy than in the garage! But maybe you’re one of those super-organized folks who, as a ritual, clean your guns at home before you put them away. Fine, but let’s suppose it takes a few more rounds than you expected to achieve a perfect zero, and you also want to do a bit of practice shooting with that rifle. We all have our own protocols about how often to clean a rifle barrel…but no two barrels are alike in the state of cleanliness at which they shoot their best.

Depending on rifle and cartridge I like to clean after somewhere between fifteen and twenty-five rounds. It’s easy to go past either number while comparing loads for accuracy. If you’re handicapped by a fouled barrel you really can’t know what you’re dealing with. So I clean periodically at the range. If the rifle is going on a hunt soon I clean the barrel at the end of the range session…and then I fire a couple of fouling shots and check zero one last time. Yeah, the purists are howling: That means I’m putting away a dirty rifle. Yep, sure am, but it’s ready to go hunting, and by my own cleaning protocol I’ve still got at least a dozen rounds to go before I have to clean. That will get me through most big game hunts anywhere in the world. Of course, if the rifle is going on a prairie dog hunt there might be a cleaning break every hour or so. 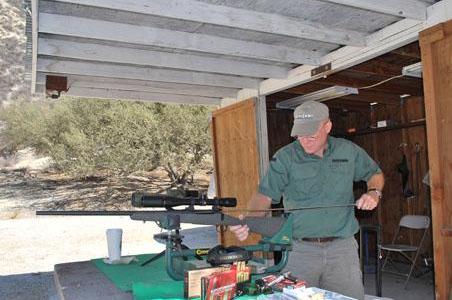 I’m big on cleaning at the range, with my protocol to clean after an average of about twenty shots. If the rifle is going on a hunt soon I clean after I’m done shooting, then I fire fouling shots and check zero one last time.

A major issue in our modern world is time. No one has enough of it, but range time simply cannot be rushed. Whether zeroing or checking loads for accuracy, there is no learning curve if you let your barrel(s) get hot. This is perhaps one area where my job-related system of taking multiple rifles to the range pays off. I put up multiple targets, and I can shoot groups sequentially, letting one barrel cool while I’m shooting something else.

Realistically, combining fast cartridges, pencil-thin sporter barrels, and blistering hot summer days, you may get only three meaningful shots and then you have to wait ten or fifteen minutes before you can resume. How hot is too hot is subjective. Some barrels continue to shoot well when quite warm, but I’ve seen ultra-lightweight sporters that are only good for two-shot groups, with the third shot already starting to walk out of the group. Generally speaking, however, uncomfortably hot to the touch is the limit. One important point: If you have rifles chambered to different cartridges with you on the range, be very careful to keep only ammunition for the rifle you are shooting on the bench! You’d be surprised at how many mismatches can be chambered…and may actually fire, obviously with potentially disastrous results.

The benchrest is all about the rifle, checking accuracy and establishing the perfect zero you want. Depending on what hunting you’re planning (and also on the cartridge), some of us establish zero for a specific distance, whether one, two, or possibly three hundred yards. Others follow Jack O’Connor’s rule, sighting perhaps two to as much as three inches high at one hundred yards. That’s up to you, and perhaps worthy of separate discussion, but the benchrest is for establishing that perfect zero and learning the degree of your rifle’s accuracy. The bench has very little to do with field shooting and in fact, properly done, the goal to benchrest technique is to remove the human element as much as possible. 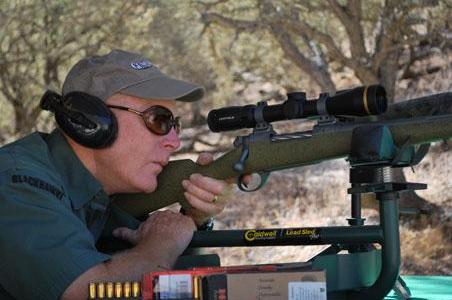 Accuracy off the bench is about being steady and comfortable. I often use a Caldwell Lead Sled to attenuate recoil, and if using sandbags I pad my shoulder with a PAST recoil shield.

Shooting off the bench has diddly to do with field marksmanship, so shooting groups from a solid benchrest, although invaluable for load selection and confidence, must not be considered “practice for field shooting.” Don’t be lazy! While you’re at the range, get away from the bench and do some genuine practicing from potential field positions. Because we use them a lot in the field we always do some shooting off sticks, and although I don’t practice them all during every range session, I make a point to frequently shoot prone, sitting, kneeling, and offhand. You can also get creative, using packs and whatnot to replicate field shooting positions.

Some of this “position practice” should be done with your hunting rifle, using the load you intend to hunt with. That’s a good time to run through full magazines, not only practicing working the action from shooting positions, but also ensuring reliable feeding. However, sparing your shoulder and your wallet, effective position practice can be done with a .22 rimfire. In a perfect world a .22 with similar action and sighting equipment to your big-game rifle is the ultimate training tool, but shooting is shooting and all shooting is good. Just don’t confuse shooting for accuracy off the bench with effective practice for field marksmanship. 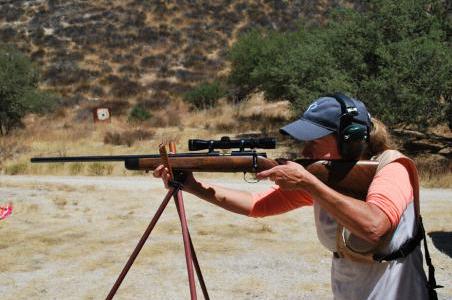 A good old .22 rimfire, painless and inexpensive to shoot, is an invaluable tool for “position practice” at the range. Donna and I always bring sticks and a .22 to the range, and we intersperse centerfire shooting with a few magazines of .22 Long Rifle.