All travel has its risks, so do your best to be prepared for them.

Hunting is supposed to be fun, and it’s also, statistically, more injury-free than a lot of other hobbies and sports. There are, however, irrefutable principles to keep in mind. First is Murphy’s Law, “whatever can go wrong will,” and then there’s the corollary to Murphy’s Law: When something does go wrong it’s most like to happen at the worst possible time. There’s also the simple reality that, despite the very best preparations and precautions, bad things can and occasionally do happen to good people. I’m not a gloom and doom guy, and I don’t spend a lot of time brooding over stuff that might happen, but it’s always wise to keep the famous Boy Scout motto in mind: Be prepared!

While we tend to focus on catastrophic events such as getting bitten by a snake or a lion, the reality is that genuinely serious accidents are rare. Also, just like going to the grocery store at the corner, less glamorous events like vehicle accidents are more likely anywhere. As are ailments such as tummy issues from unfamiliar food. We’ll deal with more serious events in a bit, but minor cuts and scratches and inconvenient but non-life-threatening ailments are going to come along now and again.

Most outfitters have well-stocked medical kits for real emergencies, so it shouldn’t be necessary to take a heavy medical kit on outfitted hunts. Do-it-yourself expeditions are obviously different, but across the board it’s always a good idea to pack a personal first-aid kit against the little stuff. Most of the contents should be obvious: Band-Aids of various sizes; antiseptic wipes, and for sure antibiotic ointment. It depends on where you’re going, but it’s amazing how quickly even the smallest scratches can get infected in tropical climates. Obviously you must talk to your doctor about medications, but analgesics, a general antibiotic, and an anti-diarrheal such as Imodium can come in handy. If you’re lazy like me, African Sporting Creations is a good source for ready-to-go first aid kits. 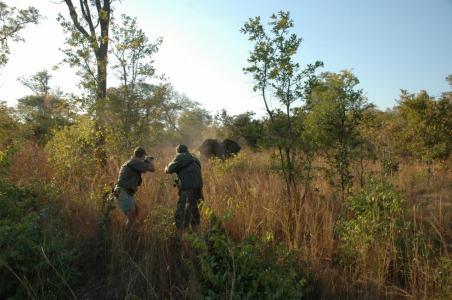 As hunters we probably focus too much on incidents with dangerous animals. They do occur, but more mundane incidents such as vehicle accidents and unexpected illness are far more common.

The silliest thing I ever did was once in Namibia. Looking at the ground for tracks when I should have been looking up, I caught a thorn in my lower eyelid. Facial cuts always bleed profusely, but I must have hit an artery because I couldn’t get it stopped. Yep, we Super-Glued it, worked like a charm!

So, let’s get on to the really bad stuff we all worry about. Fortunately, catastrophic incidents are rare. They can’t necessarily be avoided, but the best way I know to mitigate them is to carry a medical evacuation membership. Today I have Global Rescue, so I carry a Global Rescue card. But here’s the thing: It’s important to understand how the card should be used. No matter the company, if you have a head cold or get mad at your outfitter, you are not eligible for evacuation. There are exceptions, but typically if you have a problem, you get to a local care facility, and that’s when your medical evac folks get into gear. However, some providers offer field rescue service that will actually deploy help right to your location in the field if warranted.

Maybe they bring you home or maybe to a care facility in South Africa or Europe and then, when things are a bit better, they bring you home. But here’s the big thing: How do they know what action to recommend unless you contact them? So this a three-part deal: First, you have your membership card. Second, you have communications (like a sat phone). Third, you have the common sense and will to use them.

This last is where I personally failed. I like to say that I had my heart attack on a mountain in Uganda, but actually it was a wimpy little ridge. On a very hot morning we tracked a buffalo to the top, and I was oddly out of breath. Eventually we shot the bull, and I was doing high-fives with the game scout when the world started to spin and I went out cold. They fanned me and poured water on me, and after a bit I crawled to the buffalo and we did photos and TV.

Here’s where the stupid part starts. I didn’t know what was wrong, but I had the tools in my daypack: My medevac card and a satellite phone. I should have called immediately, and perhaps a real doctor could have made a proper diagnosis and got me on the road to help. Instead, tougher than common sense dictates, I waved it off. I didn’t make the call. The International Hospital in Kampala missed it, giving me a bag of antibiotics for a pulmonary infection. The commercial flight home was horrible. By the time I landed I couldn’t breathe, and Donna took one look at me and said, “You’ve had a heart attack.” It took the folks at French Hospital ninety seconds to confirm that diagnosis. Privately, they told Donna I wouldn’t have lived through the night. I lived, but the drama was unnecessary. I had the card, and I had the sat phone. A consultation could not have averted the incident, but would have gotten me to proper care sooner, and home in much better shape.

Three things: Medical evacuation membership; well-charged satellite phone, maybe with an extra battery; and the common sense to use them. You don’t need to own a sat phone; you can rent one. My go-to is Explorer Satellites; they rent phones (with minutes) for reasonable rates, and they can recommend the correct system for your destination. Iridium has long been the standard, but Inmarsat is better in the Southern Hemisphere (i.e. southern Africa, Australia, South America). Few of us need multiple systems, so it’s probably better to rent and let experts guide you. 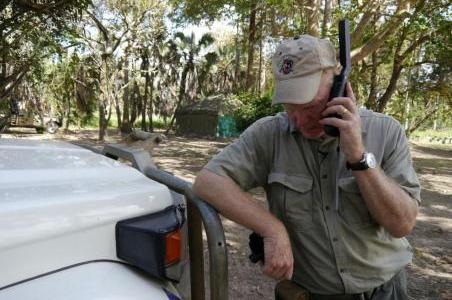 Part of the deal with all reputable medical evacuation providers is round-the-clock consultation with a doctor. This is smart business because evacuation may not be required, but if it is the wheels can be set into motion via satellite phone.

I didn’t expect to have a heart attack. Nor did Angie Heister, walking down a trail in Zimbabwe, accompanying her husband on safari, expect to be flattened and gored by a Cape buffalo. The difference: They not only had their medical evacuation cards, they had enough sense to use them. The outfitter’s preparedness got her to Victoria Falls by helicopter, but with her lungs collapsed, a huge wound in her thigh, and serious spinal injuries. Weeks passed before she could be moved back to the United States. Just remember that Mr. Murphy awaits the unwary and unprepared, and that bad things, however unlikely, can happen to good people.

Lastly, let’s also remember that bad things happen to good trips planned by good people. Hey, traveling is what I do as a major part of my business. I take my chances. There are, however, uncertainties in many part of the world, so in recent years, personally and when giving seminars, I have advised folks to take out “travel insurance,” but I’ve rarely followed my own advice.

Recently, much to my chagrin, I learned that “travel insurance” is not the right term for what is needed. In April 2016 I was headed to Armenia, an out-of-the-way Asian destination. In previous years I’d been burned on plane tickets to Iran, only to find I could not get a visa. So, this time, Donna bought travel insurance from Allianz Global Assistance, recommended by the airline. Three days before the hunt, Armenia and neighboring Azerbaijan started a little border war. Figuring it was sort of like a shrew attacking a mouse, I was all for ignoring it until they told me that the reserve we were headed to was under artillery fire, and we would be hunting within observation of enemy snipers. Carrying a rifle? Not a good idea! So the cancellation was unavoidable, but I was content that the non-refundable plane tickets were covered.

Turns out, when I read the fine print, they were not covered. Travel insurance might cover you in case of traditional issues such as death in the family or medical emergency, and these things can happen to hunters, but we also deal with destinations where other serious stuff happens. Last week two buddies of mine were headed to the Central African Republic. The day before departure their outfitter was attacked by supposed rebels. He and his client managed to escape, with their vehicle shot up and tires shot out, but no injuries.

I recommended the hunt, but also knowing C.A.R. has been dicey for years, I recommended the hunters get travel insurance. Wrong words! What you need, instead, is “travel cancellation insurance,” and make sure it’s good. Global Rescue, for example, offers “CFAR” (Cancel For Any Reason) coverage. That’s the type of insurance I should have had, and that’s what my C.A.R.-bound buddies needed.

Always read the fine print and ask specific questions. There is a story of a guy in Zimbabwe who, while standing on the edge of a draw waiting to hear the death bellow of a buffalo, somehow managed to shoot half his foot off with a large-caliber double rifle.

Horrible, but it got worse. He had a temporary membership to a medical evacuation service. He had called the company to activate the membership; he gave them his departure, and they gave him a start date. But when he needed help badly, coverage was denied because his membership was required to start twenty-four hours before departure. The fact that their office gave him the start date didn’t matter; they refused evacuation. Obviously Mr. Murphy was right there beside this unfortunate gentleman, and it was clearly not his fault because he was misled, but it’s important to always read the fine print. It’s a small but critical issue in the art of being prepared. 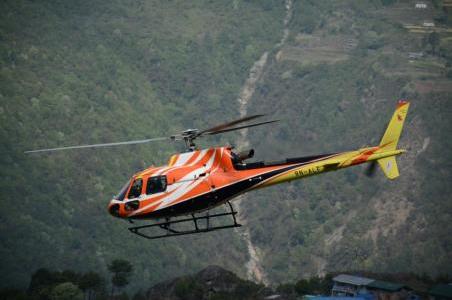 Helicopters save countless lives because of their speed and agility. Regrettably they aren’t available everywhere we crazy hunters go, but in a real time-sensitive emergency a chopper is the usually the best option to get to help.