How do you know how much gun is enough?

Many friends and colleagues in the business are primarily gun writers, while others are primarily hunting writers. I am a bit of both: I love sporting firearms, and I’m an avid hunter. So a favorite campfire argument (and writing topic) concerns the suitability—“adequacy,” if you will—of various cartridges for specific field applications.

An old African adage is to “use enough gun.” Although not directly attributable to Robert Ruark, it made a great title for a posthumous collection, published in 1965. I tend to follow that advice, and if I err it’s usually on the side of caution. So, regardless of the cartridges or game discussed, any article on the subject is probably going to draw comment. Invariably, at least one will start with: “Karamoja Bell shot over a thousand elephants with his 7×57…” I don’t know where this story got started, but for sure it is perpetuated by folks who haven’t taken time to actually read W.D.M. Bell’s works.

Just the other day, once again, I saw in another publication a reference to Bell’s “1,011 elephants” with the 7×57. For me this is like fingernails on a blackboard, because it just isn’t true. Bell left us excellent books on his exploits, still great reading today, and he identifies the rifles he used often enough that reality is clear. Bell was a smallbore guy, and the .275 Rigby (a.k.a. 7×57) was a favorite…but he used a lot of other rifles. His largest one-day bag was taken with the .318 Westley Richards, a .33-caliber firing a 250-grain bullet. Because ammo was so available, he used the .303 British a great deal, 215-grain .311-inch bullet. After World War I he returned to Africa just once, and his battery included a .400 Jeffery double and a .416 Rigby bolt action.

Today Bell’s preferences for elephants no longer matter. He was a great marksman and athlete, hunting in an altogether different time, and history has spoken: Most of his choices are illegal today, below the statutory minimum. But this isn’t about Walter Bell, or even about using “enough gun.” Rather, how can you know how much is enough? 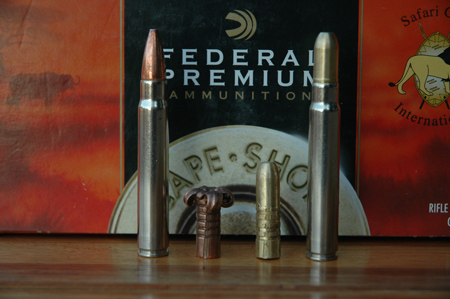 This is actually difficult. In any hunting situation there are broad parameters of “adequacy,” with a wide selection of suitable calibers and cartridges. In Oregon last year my friend Tim Lesser shot a black-tailed deer with his pet .375 Ackley Improved. We can probably say that he was overgunned, but he certainly got the job done…so too much gun seems a lesser sin than not enough, which can result in wounded game. Today it’s common for .22 centerfires to be legal for deer. I don’t think they’re perfect, but with today’s heavy bullets designed for deer hunting they are adequate. Based on experience in Africa on small antelopes such as steenbok I’m totally convinced that, regardless of velocity, the .17s are not adequate for deer. Their light, frangible bullets, intended for varmints, just don’t have the penetration. Cartridges below .22 centerfire generally remain illegal for deer, and I think this is a good thing.

Let’s look at some larger animals. As large and potentially dangerous beasts, African buffalo tend to fall under the same legal minimums as elephants, in most countries either 9.3mm (.366) or .375. I’m sure these are enough, but since I believe in adhering to game laws I have little personal experience with lesser calibers on African buffalo, a couple with .33s and that’s about it. Ruark wrote that he had taken buffalo easily with his .30-06, and I saw a buffalo taken very cleanly with a single 156-grain solid from a 6.5x53R (not all countries have minimums), and of course many buffalo were taken with such light calibers in the old days.

The Asian water buffalo is bigger than the Cape buffalo, but few jurisdictions have legal minimums. Australian market hunters tended to use .303s and, later, .308s. I do have some experience here. In the Philippines we used an M14 with 7.62mm military ammo—which is all we had available. In Argentina I’ve taken water buffalo with the 7×57 (with 175-grain solid); and also the .300 RUM (with 200-grain Swift A-Frame) and .350 Remington Magnum (with 225-grain Barnes X). There were no problems, and for sure bullet selection makes a huge difference. However, in all cases this was pushing the envelope, not “erring on the side of caution.” Obviously there was enough gun to kill the animal, because that’s what happened…but was there enough gun to stay out of trouble if things didn’t go quite right? I think not.

Big bears are much the same, except that no North American jurisdictions I’m aware of set different minimums for grizzly, brown, and polar bear than for other native big game. I’ve always figured the .33s and .375s were about right, and certainly have been in my experience. Especially with grizzly, which is more often a target of opportunity than the others, hunters often use what they have. Jack O’Connor took a number of mountain grizzlies with his beloved .270…but when he went for Alaskan brown bear he used a .375. After taking a sheep in southern Yukon I tried hard to get a big grizzly we’d seen, and the only rifle I had was a .270 WSM. I didn’t get a shot, but I probably could have made it work.

On the other hand, the only problem I’ve ever had with a big bear was with a .300 Winchester Magnum and a good 180-grain bullet. Bullet performance is critical, but shot placement is everything, so isolated bad experiences are not definitive. However, as recounted in my recent Deadly Encounters book, veteran B.C. guide Cy Ford was killed by a grizzly his hunter had wounded with a 7mm Remington Magnum. The bear also died…but not soon enough. Traditionally, Inuit hunters loved the .222 Remington, a fact that is cited almost as much as the W.D.M. Bell myth…but, over the years, a lot of Inuit hunters went out on the ice and never returned. So I’m not going to waver on this. Soon I’m going to B.C. to hunt a grizzly, and I’m taking a .338 Winchester Magnum, a sound and sensible choice.

Potentially dangerous animals alter the rules, so let’s talk about some large non-dangerous beasts. The eland is Africa’s largest antelope and the world’s largest non-dangerous animal; a big bull outweighs any buffalo. I doubt anybody has shot “a lot” of them, but I’ve taken over a dozen. I have mostly used .375s; in my view they really are perfect as a combination of ranging ability and power for such a large animal. 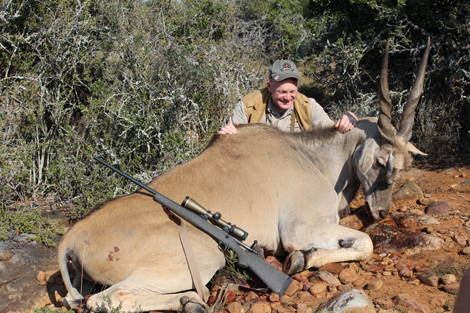 In 2016 Boddington used a .300 Winchester Magnum with 200-grain Hornady ELD-X to take this Cape eland, Africa’s largest antelope. Over the years he’s taken most of his eland with .375s, which work perfectly—but he’s not convinced that much gun is essential.

Is that level of power really needed? I don’t know. Just a couple weeks ago, hunting with Frontier Safaris in South Africa’s Eastern Cape, I shot a nice Cape eland bull with a .300 Winchester Magnum and a Hornady 200-grain ELD-X bullet. We never found a drop of blood, but we found the eland down within a hundred yards. I’m reminded that Donna shot a big eland bull with a .30-06 and Federal 180-grain Trophy Tip; and daughter Brittany shot one with her 7mm-08 with 140-grain Nosler Partition. No problems with either, so while a .375 gives me great confidence on eland, maybe it isn’t really essential.

The biggest bull moose are a bit lighter than eland, but still very large animals. Because they’re a food staple in the North many hunters have taken more moose than I have, and most are probably shot with whatever general-purpose hunting rifle is available. My experience is that moose are not especially hardy but, more importantly, they are long-legged, but slab-sided, so do not require as much bullet penetration as elands or buffaloes. Most of mine have been taken with .33s and .35s (which work decisively), but I’ve seen moose taken quite cleanly with .270s and I’ve used .30-calibers with no problems.

Often it seems that moose react slowly upon receiving a bullet, standing or walking away, and then lying down. I shot a big Alaskan moose at close range with a .416 Remington Magnum…he didn’t go anywhere, but didn’t seem unduly impressed by all that power. The most dramatic effect I’ve ever seen was a Canadian bull my Dad shot in the heart with his .308 Winchester: Straight down and dead in its tracks. This would lead one to believe that the .308 Winchester is the best moose gun ever invented. Maybe, but no animal reacts the same upon receiving a bullet…and the other two great variables are shot placement and bullet performance. So it’s always dangerous to fixate on isolated incidents, whether good or bad, and better to make your choices based on a consensus of experience. There’s always a broad range of perfectly suitable choices, but experience-based knowledge is out there and available. 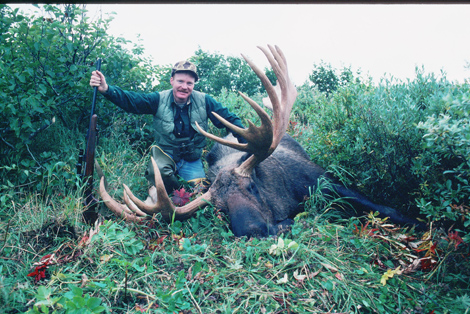 Moose often react slowly upon receiving a bullet; this bull was not especially impressed by all that power. Although the moose is a big animal, Boddington is convinced that larger cartridges aren’t necessary.