I’m not very good at sitting on a stand. In fact, I hate it…but in a lot of areas it’s the only sensible way to hunt whitetails. So I deal with it. Most of the time I fidget, unable to sit still…but that last hour of daylight holds my full attention. For me that’s the most exciting time. In the morning dawn brings promise, but after the sun comes up chances get slimmer by the minute.
It’s the opposite in the evening…with every minute that passes chances improve. Until,suddenly, you realize it’s just too dark…depending on weather and vegetation, there may be minutes of “legal shooting time”…but if a buck shows up you can’t judge antlers.

That’s a big let-down with a lot of my whitetail hunting, but those last few minutes of near-dark remain exciting at my friend Zack Aultman’s place down in Georgia. Too late for deer or, in the spring, the turkeys have gone to roost…so now it’s time for pigs! Folks who have hogs on their place generally don’t love them…but folks who hunt on places with hogs often do. Well, not always. On my last night in Georgia in December ‘16 I had a half-dozen does and a young buck on a food plot to my right, and it was a perfect evening, misty and cool. Then four hogs came out
to my left.

About 45 minutes of light remained, so although I was sorely tempted I didn’t shoot…but I might as well have. Deer don’t like hogs. Because of a slight roll to the terrain they couldn’t have seen these pigs, and with the breeze it’s impossible they smelled them…but even though I couldn’t hear them the deer could, because, a quarter-mile from the hogs, they ran like the hounds of hell were after them. The hogs left as well and I finished the hunt in solitary splendor. 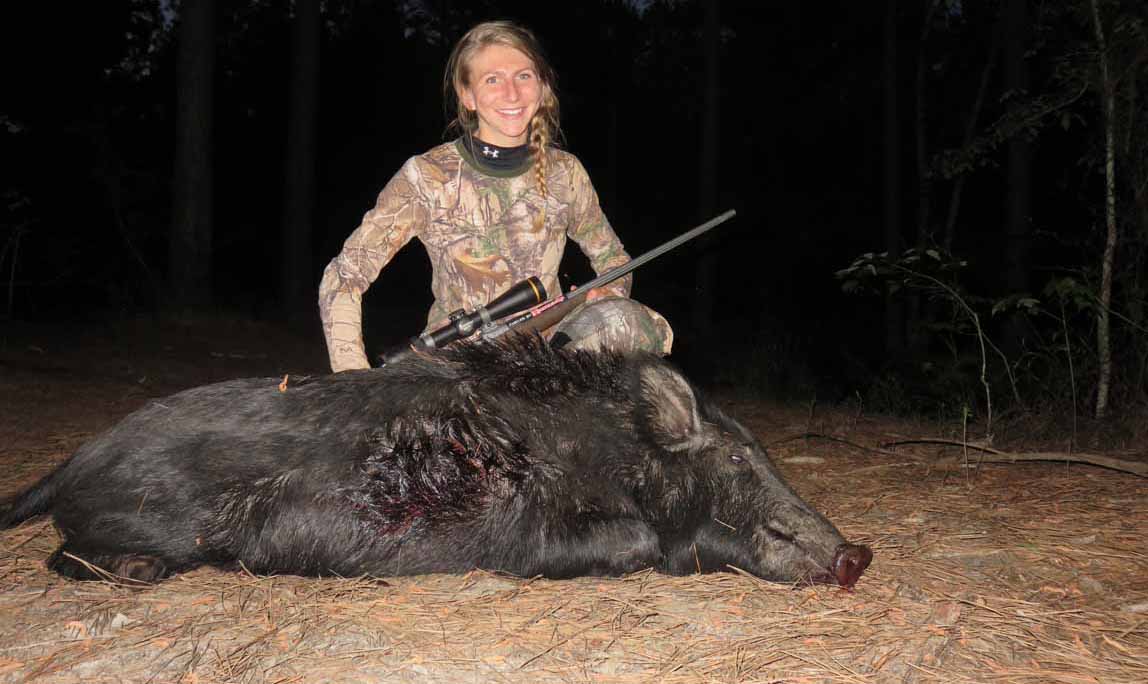 Videographer Kelly Bertellotti with her first wild hog, taken while filming a spring turkey hunt in Georgia. After the turkeys roosted we went hog hunting, and she shot a nice
“eatin’ size” pig just after sunset.

Nearly 15 years ago gunmaking legend Kenny Jarrett took me down to hunt at Zack’s “Aultman Forest,” literally a pine plantation. There were hogs present back then, but only a few, and sightings were rare. I’ve been there a number of times since, and I’m shocked at how the hogs have increased. Zack declared war years ago—shoot on sight—but it’s like closing the barn door after the horses are gone. The pigs didn’t descend on Aultman Forest in a surprise porcine wave attack. There was no intelligence failure, no “Dugout Doug” MacArthur at a remote base ignoring reports. Their increase was noted, action was taken, and Zack’s troops haven’t run out of bullets…but the pigs are winning. From perhaps thirty pigs taken a year when I first hunted there, in recent years the take has climbed to 1200 pigs per year…and their numbers keep growing.

This is just a small microcosm of what is happening across much of the Southeast…and northward and westward from there. Feral hogs have been present since before the Civil War, so exactly why the current exponential expansion (in both numbers and range) is occurring is unclear…but for sure it’s happening. Current estimates place the feral hog population in the United States at about nine million…the second largest large wild mammal population in North
America after the whitetail. Feral hogs are well-established in various enclaves from Mexico to quite far up in Canada, with sightings in every U.S. State except Alaska. Agricultural damage now exceeds two billion per year.

Now, in Georgia I enjoy shooting hogs. That’s the right term, because it’s stand hunting, and when they appear we shoot them if the timing is right. Realistically, this doesn’t do much good; we take one or two out of a sounder, and the rest are educated, because pigs are smart. In California I enjoy hunting them, which is also a correct word, because we’ve lived with feral hogs for generations, and hunting them is business on the Central Coast. A small sounder can destroy a barley field in a night, but the pigs out there are self-limiting. Periodic drought gives
them up and down cycles, and they aren’t the plague they’ve become in the Southeast. In fact, they are a resource: Wild hogs have replaced deer as California’s top big-game animal, and in our Central Coast region hunting them, processing them, and housing and feeding the folks from our big cities who hunt them is a mini-industry.

Now, I’m from Kansas. When I was a kid I doubt there was a single feral hog in the state of Oklahoma, just to our south. Today the population is climbing toward a million, established in all counties. They’re a problem there, but also a business; hog outfitters have sprung up all over Oklahoma.
They’re definitely a problem in Texas, several million strong—but they’re also a resource, with hog hunting (including, now, from helicopters) an active business.

I’m a landowner in southeast Kansas, fifteen miles from Oklahoma. My neighbors and I keep watching for hog rootings, and indeed we have an ideal situation for hog movement: Wooded, interconnected river corridors, much of it public land; unlimited food; and lots of nonresident landowners. Hogs are known to have established themselves off to the west, and to the east along the Kansas-Missouri line. Once they’re in breeding populations they’re hard to get rid of…but we don’t have them…yet.

Recently I attended a local seminar for landowners on feral hogs, conducted by the government hunters for the U.S. Department of Agriculture. Two years ago a farmer shot two hogs less than ten miles from my place. I assumed we’d see pigs in six months, but it hasn’t happened. In our area these guys are doing an awesome job holding the pigs at the Oklahoma line! As a hunter I’d be happy to see them…just at dark while I’m sitting on a deer stand. My neighbors, however, are farmers; they dread them, and we assume they’re on their way.

Because they are so smart, and because they are so prolific, once established it is almost impossible to get rid of them. Ask the folks in the Southeast, and in Texas, and in Oklahoma! In Kansas we’re not smug; we’re scared. The USDA boys showed how the progressive proliferation of hogs in Tennessee and Oklahoma could not have been altogether natural. The geographic jumps were too large, so it must have been aided by folks releasing truckloads of feral hogs so they could hunt pigs.

That genie can’t be put back in the bottle, but our position in Kansas is that landowners or designated agents can shoot hogs…but it is unlawful to possess or transport wild hogs, and there will be no selling of pig hunts. We don’t want to follow the Oklahoma example. Crop damage is just one issue, but hogs will hurt our deer herd and our deer hunting, along with our turkeys and everything else.

I support this position. I’ve seen the advance of the feral hogs in too many places. They don’t need help, and I know how destructive they can be. But, every night just at dusk, when I sit on a deer stand in Kansas, I imagine I’m in Georgia, waiting for hogs…and I wonder if this will be the first night when wild hogs make an appearance at my place. For sure they’re coming, and I’m pretty sure they can’t be stopped. 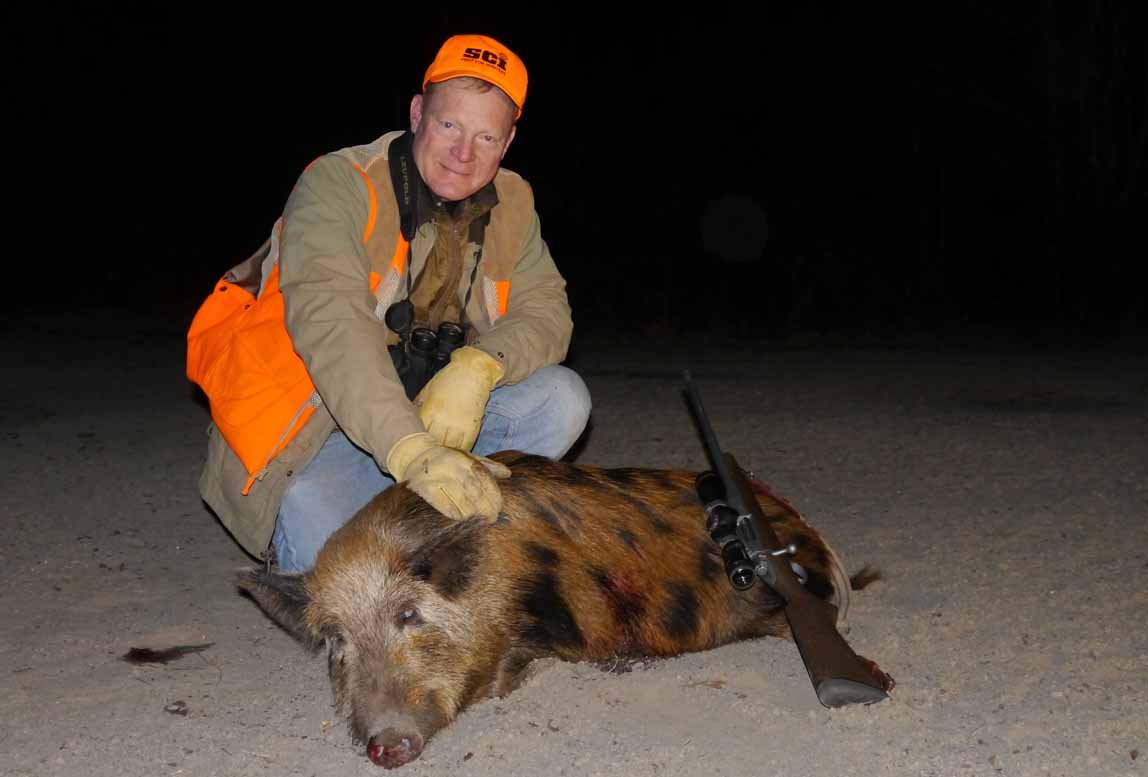 In most areas feral hogs occur in a wide range of colors and patterns, although black seems to be predominant for most mature boars.