In search of the world’s most exotic wild turkeys.

The wild turkey is probably the second-most popular game in the United States, following deer. I tend to think of all turkeys as “big-game birds.” We call them, not much different from rattling in a buck or bugling in an elk; and we pattern them, and sometimes stalk them. Usually we take them on the ground, so we deliberately aim at them, focusing on shot placement (head and neck), which is different from all other bird hunting.

Part of the popularity is the spring season, the most exciting time to hunt gobblers and a time when most seasons are closed. Part, too, is the availability. In my lifetime turkeys have increased from remnants into millions, now returned to all former range, and found in many areas that never had them. As with deer, most turkey hunters hunt close to home, but there is a growing group of traveling turkey fanatics who set goals to hunt different varieties in different areas.

There are four distinct subspecies of turkeys in the United States, with distinct plumage. In the days when turkeys were scarce, game managers weren’t always careful about which turkeys were introduced where—California, for example, had no turkeys but now has three varieties (and a lot of hybrids). The Eastern wild turkey is the probably the most widespread, native to the eastern half of the country. Merriam’s turkey is the bird of the Rockies, now spilling over on both sides. When turkeys were nearly gone Rio Grande turkeys remained primarily in Texas, but now are widespread from the Gulf Coast up through much of the Great Plains.

Within the U.S. the rare bird is the Osceola gobbler, found only from central Florida southward. For Florida hunters this is their bird, but for turkey hunters elsewhere getting an Osceola gobbler can be tough. I concede that I’m not a very good turkey hunter: The Osceola gobbler gave me fits! It’s a tropical bird with an early mating season. I found them much less vocal than the others, and thus the very Devil to hunt. Of course, the Osceola isn’t “my bird,” so I had to travel across the continent to hunt them. This made failures extra-painful. 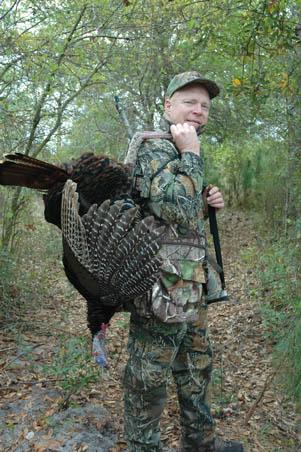 The Osceola turkey of Florida proved Boddington’s most difficult. The climate is very tropical, and he found these birds to be less vocal than other varieties. For him it’s a long trip to Florida to hunt them and he had multiple failures before being successful.

Hunting your own backyard birds is one thing, but most of us have only type of turkey within easy striking distance. Hunting somebody else’s turkeys, the “other” turkeys, usually takes planning, effort, and travel.

For quite some time many hunters have focused on taking one each of all four U.S. turkeys—but in fact there are two more native North American turkeys. The colorful ocellated turkey, quite different from all the rest, is found in southernmost Mexico and on into Central America. The tall, rangy Gould’s turkey is concentrated in Mexico’s Sierra Madre Mountains, now with a small population established on the U.S. side. Recognizing there is a growing group of avid, adventurous, and traveling turkey hunters, the National Wild Turkey Federation (NWTF) has compiled listings of fully six different “turkey slams.” Their Grand Slam is one each of the four U.S. turkeys. The Royal Slam adds a Gould’s turkey. The Canadian Slam is Merriam’s and Eastern in southern Canada only, and the Mexican Slam, similarly, is Rio Grande, Gould’s, and ocellated taken in Mexico only. Then there’s the World Slam, one each of all races of wild turkeys.

You can check out these listings by going to www.nwtf.org/hunt/records/slams, where links will lead you to their listings of registered slams. I was shocked to learn that more than three hundred hunters have registered World Slams with NWTF. Quite a few of these avid turkey hunters have registered multiple World Slams—the highest number I saw was eight, credited to bowhunter Michael Jefferson. Oh, one more slam: The U.S. Super Slam requires taking one turkey in every U.S. state except Alaska (our only state that has no turkeys). Six hunters are known to have accomplished this amazing feat!

This last lies far beyond my wildest aspirations and, honestly, sounds like work. But at least one each of all six is a worthy goal that will take you to some interesting places—even if, like me, you’re not a particularly avid turkey hunter. In the course of a long hunting career the four U.S. birds sort of came along although, having been beaten pretty badly twice, I admit the Osceola turkey became a mission. The two Mexican birds, however, require specific expeditions for almost everyone.

The ocellated turkey is hunted primarily in Mexico’s Yucatan Peninsula, with some opportunity in adjacent Guatemala and Belize. The ocellated turkey is smaller and brightly colored, so different that it was once thought a separate genus, now considered a separate species of the turkey’s Meleagris genus. This is jungle hunting, hot and thick. These birds don’t exactly gobble; down there they call it singing, primarily done on the roost in mornings and evenings. Although occasionally taken by ambush or stalking, the primary hunting technique is to roost birds by sound in the evening, then stalk just at first light. Interestingly, this is exactly the way the big capercaillie grouse is hunted in Europe!

They are not easy; in four hunts in Mexico’s Yucatan I’ve shot exactly one! However, hunting ocellated turkeys in good country isn’t as unsuccessful as that sounds. Most of the time I was also hunting other jungle game such as brocket deer, devoting only part of the time to turkey hunting. My own interests aside, the turkey hunting market is avid and active; down there the ocellated turkey is the outfitters’ big draw. Success is not assured, but the local guides know how and where to look for turkeys; most hunters who really concentrate on the ocellated turkey will be successful. 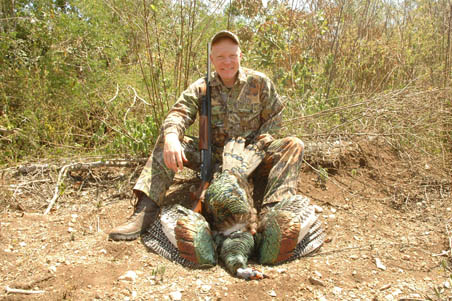 While all the other races are subspecies the ocellated turkey of the Yucatan Peninsula is a unique species, smaller and more brightly colored. Hunting this turkey in its jungle habitat is a real adventure.

Until the spring of 2017 the one turkey I’d never hunted was the Gould’s turkey. Gould’s isn’t the heaviest, probably because of diet…but they are definitely the tallest, big birds with large heads and a huge tail fan. Some permits are now available in Arizona, but the Gould’s turkey is readily hunted in Sonora’s Sierra Madres.

In years gone by I’ve done a number of Coues deer hunts in Gould’s turkey range. I saw turkeys only once or twice, so I had the impression that hunting them might be extremely difficult, sort of a post-graduate turkey hunt. In the right place definitely not! I hunted with the Mossberg folks with Tall Tine Outfitters, not much more than an hour south of Nogales on Mababi Ranch. This was a very special place, where wildlife had clearly been looked after. It wasn’t just a great hunt for Gould’s turkeys…it was one of my very best turkey hunts! The only times I’ve ever seen more turkeys were Rio Grande turkeys on carefully-managed Texas ranches.

I had no idea what to anticipate, but I suppose I was expecting non-vocal birds, not like ocellated turkeys, but more like Osceola turkeys. Not so! These Gould’s turkeys acted like plain old wild turkeys caught at the peak of their springtime ritual. They gobbled, they strutted, they came to calls…and there were lots of them!

We had a full five days to hunt, but by the end of the third day four of us had seven nice gobblers between us, astonishing. Mossberg’s Linda Powell was the only holdout, and she opted to not take a second bird—her gobbler completed her fourth world slam! This is another feat beyond my wildest aspirations, but I’m glad that I now have at least passing experience with all six of our big-game birds. Who knows, maybe someday I’ll become a real turkey hunter! 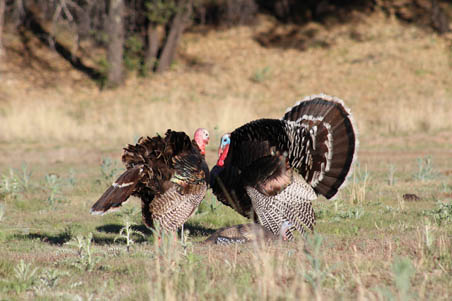 This Gould’s turkey is about to give a decoy a drubbing. Although mature this gobbler had a scraggly beard so the hunters didn’t shoot him…but they eventually had to chase him away to keep him from ruining the decoy!