Opening day of antelope season dawned sunny and warm on the high plains of northern New Mexico, where the welcome signs at the state line tell you you’re entering the “Land of Enchantment.” It had been an unusually wet summer and the rains had left behind cattle ponds filled to the brim, lush waves of blue grama grass as high as your knees, and abundant herds of pronghorn dotting the sprawling ranchlands. We had gotten an early start, driving northeast two hours from Las Vegas, New Mexico, to the vast landholdings of the M&M Cattle Company, for which a coveted landowner tag for a buck antelope was tucked safely in my pocket. Now we were glassing a large group of more than twenty of the distinctive tan-and-white animals before the sun had even cleared the eastern horizon.

“Mostly does,” said Robbie Trujillo, my guide. “But it looks like four bucks on the far side of them. Feel like taking a walk?”

“Absolutely,” I said, pleased. Too many antelope hunts I’ve been on involve mostly driving around. It’s undoubtedly the best way to cover ground, but it’s much more fun to explore the high plains on foot and try to sneak into range of an unsuspecting antelope.

Half an hour later we were crouched in the grama grass while a dozen pronghorn does moved around us, feeding on both sides of us as we sat motionless, discussing the situation in low tones. None of the bucks we had glassed earlier were visible, and we speculated that they were probably hidden just beyond a small rise. A large, beautifully furred coyote loped in to check out the situation, and one of the does promptly ran him off. Affecting little concern, the coyote trotted casually past us, pausing just 120 yards from me before meandering away.

“Today is that coyote’s lucky day,” I said. Taking a shot at him would risk spooking the antelope herd.

Robbie grinned and shook his head. “He has no idea.”

Eventually we were able to work our way around the group of does and glass into a wash beyond them, but we spotted only one small buck. We continued, making a wide circle across a huge roadless section of the ranch as we worked our way back, glassing carefully from the top of each rise and the edge of each section of broken ground. We took several hours to make the loop, spotting more does, a few small bucks, several mule deer, and another coyote, this one off in the distance. It was a beautiful morning with an abundance of sunshine and a few puffy clouds giving definition to New Mexico’s magnificent skies.

The pristine, unpopulated landscape stood in contrast to the high-tech way I’d found this hunt. After coming up empty on the draw tags I put in for this spring, I’d turned to a new hunt-booking website called BookYourHunt.com. I’d surfed around for promising hunts, found this one, and reserved it. Three months later, as I returned to the truck after a fine morning’s hike on a game-rich ranch in New Mexico, I was very happy I’d done so.

Robbie and I decided to head to another part of the property to try our luck. Passing some cattle pens and a couple of old buildings, we were soon back out on the endless green of the high plains, which were now starting to shimmer with mirage, making glassing more difficult. Nevertheless, it was impossible not to spot the big buck antelope running full-tilt across a low hillside. A moment later, without even a pause to consider his action, he simply dropped to the ground and lay there for about ten minutes, shaking his head periodically to discourage the flies. Soon he was up again, running full tilt for no apparent reason, then once again dropped to the ground where he rested for a time.

“Do you suppose he’s trying to outrun the flies?” I asked Robbie. All of the antelope we’d seen had been plagued with swarms of flies buzzing around their heads, another by-product of the wet summer.

“I have no idea,” he shrugged. “I’ve never seen one behave like that before. He’s kind of loco.”

Loco he might be, but he had a nice set of horns, so we decided to see how close we could get. We waited until he had bedded down again, then began walking straight toward him, trying to be nonchalant. We closed the distance from well over a thousand yards to five hundred, then four hundred. At 350 we dropped to our hands and knees and crawled forward until our rangefinders read 305. I set up on the sticks, but I had trouble getting comfortable. Something about my setup wasn’t working. When I squeezed off the shot, it kicked up dirt well underneath the buck, and he was up and running again. While I wasn’t happy about the miss, I was relieved it was, at least, a clean one.

We continued our pursuit of the buck, but my shot had only accelerated his crazy behavior. He continued to run and occasionally bed, and we walked when he ran and crawled toward him when he bedded down. We stayed in sight of him for more than two hours, but never again would he let us approach within 300 yards.

Eventually we decided to return to the truck and regroup. We had covered many miles already, and the trudge back to the truck was a long one. I had long since drained my water bottle and was looking forward to raiding Robbie’s cooler of ice-cold Gatorade.

As we sat on the tailgate and drained our drinks, we discussed our next move. Robbie had more than done his job, getting me within shooting distance of a very fine antelope—it was my own fault I had mucked it up. Still, we knew there were other nice bucks on the ranch, so we decided to continue our drive through this section of the property to see what we could see. As we passed a creaking windmill several small bucks looked up at us in alarm, but relaxed as we continued on past. We glassed scattered herds of does as we approached an old, abandoned house surrounded by a few trees.

The buck we spotted beyond the old house was far different from the loco buck. He was relaxed, glancing at us between indulging in mouthfuls of the lush grass. We began our stalk with great care, hoping he would maintain his calm demeanor. As we closed the distance, the antelope bedded down in the tall grass, much to my delight. The morning’s pleasant temperatures had given way to a blazing hot afternoon, and the sun beat mercilessly down on Robbie and me as we crawled on hands and knees, then on elbows, slowly moving in on the buck. Flies buzzed around our sweaty faces, and big grasshoppers leaped away on either side every time I placed a leather-gloved hand between bunches of grass.

Then the antelope stood up, looking at us. I eased the rangefinding binocular to my eyes and read the distance quickly: 250 yards. We stopped and I pushed the Bog-Pod out ahead of me and rested my rifle across it. This time I felt rock-solid as I eased a round into the chamber and slid the safety off. I held for the shoulder and squeezed off the shot. The buck took a few steps, then tipped over backward and lay still.

He was a fine, mature specimen, with good prongs and tips that bent inward in a perfect heart shape. We took photos quickly, eager to get him (and ourselves) out of the sun. The big shade trees around the abandoned ranch house were an ideal spot to skin and quarter the fat buck, and we placed the meat in coolers as quickly as possible, where it could be iced down and kept cool for my journey home the next day. An enthusiast of all wild game meat, I was thrilled with the abundance of steaks and roasts this antelope would provide and happy to have been given a chance at him after missing his loco counterpart, who probably would not have tasted quite as good as this one, anyway.
As we headed back toward town, driving into one of New Mexico’s spectacular sunsets, dozens of pronghorn gazed at us from the tall grass on both sides of the road. The Land of Enchantment really does have an irresistible appeal, especially if you’re an antelope hunter.

This fine antelope was taken with a Sauer XT 100 in 6.5 Creedmoor, using Nosler 140-grain ballistic tips. 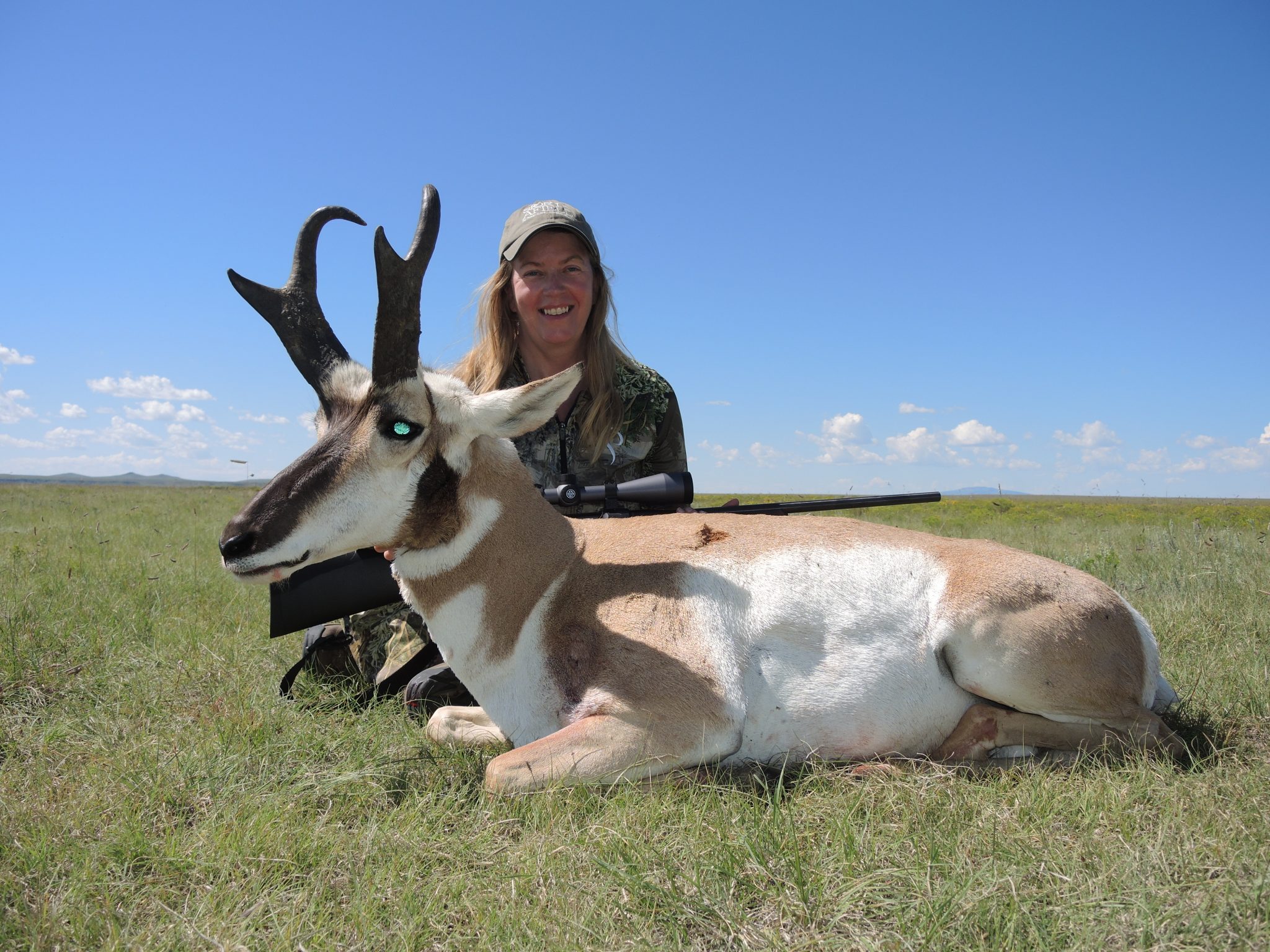 The new website called BookYourHunt.com offers something I’ve never found before—a way to search for hunts for almost any species around the world and compare outfitters, features, and prices across the board. This year, since I had no hunts scheduled for the fall, I decided to try it out.

First, I signed up for a membership on the site, which is free. I was looking for hunts within driving distance of my home in Colorado, so I started with the map page. The map was populated with little dots, showing me hunts close by and in neighboring states. I began clicking randomly, finding some elk hunts in my home state, antelope hunts in New Mexico, whitetail hunts in Iowa and Missouri, and antelope, deer, and elk in Wyoming. I focused on the whitetail and antelope hunts with guaranteed tags. With the cost breakdown shown right there on the screen, I knew right away if a hunt was in my price range or not.

Once I found this promising-looking New Mexico antelope hunt, I clicked on “Ask the Outfitter A Question” and sent outfitter John Chapel a list of questions. In less than forty-eight hours I got a friendly and thorough response from him through the website’s chat feature.

I chose my dates, clicked the “Reserve” button, and almost immediately received an e-mail from Elena of the BookYourHunt.com team, congratulating me for booking my hunt and offering to help with any questions or problems. That made me feel confident and secure about my hunt plans—and that’s an important aspect of BookYourHunt.com. You’re not on your own, stumbling blindly through a foggy internet world; the site employs a highly competent staff that jumps in to answer questions, solve problems, and make sure you have a good experience. After booking on the site, I then had ten days to send my 50 percent deposit directly to the outfitter. It couldn’t have been easier.—D.R.