In today’s world, our food mostly comes to us purged, processed, and packaged. We acquire it not by growing it from a seed or raising it from a calf, but by swiping a card or clicking a mouse. Burgers sizzle on our grills, but we’ve never been to a feedlot or slaughterhouse. We crunch an ear of corn, but the machinery that planted and harvested it remains only a vague impression gleaned from a drive down a Midwestern interstate. It’s incredible, really, how separated most of us have become from the basic elements that keep us alive.

That’s one of the many reasons we are so lucky to be hunters. Like traditional farmers and ranchers, we are some of the few in the modern era who have not entirely lost the connection to our origins, the understanding of the personal
responsibility we have toward the ecosystems and the animals that nourish us.

Thanks to a push toward healthier lifestyles and the popularity of books such as Michael Pollan’s The Omnivore’s Dilemma, a larger segment of society is starting to think beyond packaged and processed food and wonder what, exactly, we’ve been eating all this time, where it came from, and whether we can do better. As people around us begin to explore this in their own way—whether by shopping at a neighborhood farmer’s market or cautiously sampling the elk steak we share with them—we hunters have a lot to teach and talk about.

Shane Mahoney examined this topic in detail in a recent article for Sports Afield called “Hunters: The Original Locavores.” In it he suggested that much of the increased interest in hunting in recent years is coming from people who are focused primarily on the health and environmental benefits hunting can provide. And these, he contends, may be key to preserving our hunting traditions long into the future.

Shane, who holds a Masters of Science degree in Zoology from Memorial Institute of Newfoundland and has worked as a scientist, wildlife manager, and policy innovator for more than thirty years, understands the importance of solid scientific facts and quantifiable information in making the case for hunting’s future. Accordingly he is taking our understanding of wild game as food to an entirely new level with his Wild Harvest Initiative, a multi-year study designed to measure and analyze the biomass of wild animal protein eaten by citizens of the United States and Canada, and determine its nutritional and economic value.

Amazingly, this is the first time the amount of food taken by hunters has ever been examined on a large scale. The project is expected to prove the importance of recreational hunting as a food source and economic benefit, providing another important reason to conserve habitat for game animals around the country. You can learn more about the Wild Harvest Initiative at www.conservationvisions.org/wild-harvest-initiative.

A lot of us who are fortunate to at least occasionally eat veggies from the garden and venison from the hill above the house may not think of ourselves as part of a lifestyle with the fancy name “locavore.” We just enjoy being part of the process of acquiring our own food. But that concept, simple as it may be, is a bridge that offers a way to connect with others who are interested in a more elemental lifestyle, even if they aren’t hunters—yet. 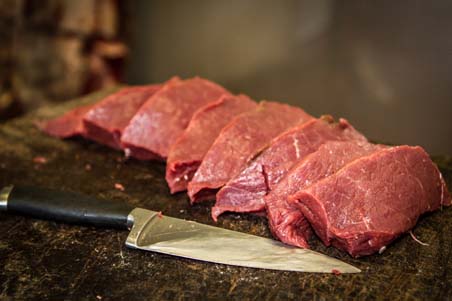