Some hunters believe they have only two choices when it comes to rifles. The first, and most obvious, choice is one of the many factory models cranked out like coffee-makers. This isn’t a bad thing, because despite the illusions of hunters who still yearn for the days of “handcrafted” factory rifles, on average, today’s CNC-machined rifles shoot far more accurately right out of the box. Many actions are designed and built for finer accuracy, are often fitted with better barrels, and a high percentage have more-stable synthetic stocks. They’re also available in a wide array of weights, suitable for anybody from Himalayan mountaineers to artillery officers.

The second choice is to order a real custom rifle, one made just for us. Unlike a rifle put together with aftermarket parts, wood-stocked customs take far more time (and money) to create. Albert Einstein once noted, “When a man sits with a pretty girl for an hour, it seems like a minute. But let him sit on a hot stove for a minute — and it’s longer than any hour. That’s relativity.” Waiting for a wood-stocked custom rifle can be like sitting on a hot stove for years.

Luckily, between “boring” factory rifles and exciting/painful custom rifles lies a broad spectrum of other hunting rifles, including so-called “special runs” available from some factories. These usually offer combinations of features not offered in standard factory models, whether chamberings, stocks, or barrels, or they might have fancier wood. Their price is normally somewhat higher than standard factory rifles, but not anywhere near the price of a true custom.

Over the years I’ve owned a number of special-run rifles, and all have shot very well. This might simply be attributed to today’s overall trend toward finer accuracy (including better bullets), but after analyzing my range notes, the special-runs have indeed shot noticeably better than most of their “parent” factory rifles.

A good example would be my Winchester Model 70 Featherweight .270, acquired during a fundraising auction at the Jack O’Connor Hunting Heritage and Education Center in Lewiston, Idaho. The 75th anniversary of the introduction of the Model 70 was celebrated by special runs of two grades of O’Connor Tribute rifles. Mine, of course, is the lesser grade (otherwise I couldn’t have afforded the auction) but it’s still a really nice-looking rifle. The Center had acquired several Tributes to use in fundraisers, and still had four left to choose from. Since there wasn’t a shooting range handy, my choice was based on the figure in the stock wood.

After I got back to Montana, however, it wasn’t long before the rifle made a trip to the range. Its very first group at 100 yards, shot with Norma’s 150-grain Oryx factory load, measured 0.40 inch. Not every group has been that small, of course, but the rifle shoots so accurately it’s moved all my other .270s down the road, and often gets used to test-fire new components. The new “Wonder Powder” (as O’Connor would have called it) for the .270 is Alliant Reloder 26, which easily gets 3,000 fps with 150-grain Nosler Partitions from the 22-inch barrel, with groups averaging around ¾ inch. (I also hunt with this rifle, something that’s shocked a few people. One guy insisted, “You don’t hunt with a rifle like that,” a statement I suspect would offend Jack O’Connor.) In fact, part of the reason I kept bidding on the rifle was hearing from several other Tribute owners about how well their rifles shot.

At the other end of the beauty spectrum is a Tikka T3 Super Lite in .260 Remington, part of a special run put together a couple of years ago by Whittaker Guns, a big store outside of Owensboro, Kentucky (www.whittakerguns.com). The place is run by Darrik Caraway, a rifle loony with a very good feel for what hunters want, the reason you shouldn’t visit Whittaker Guns without money. This special run of T3s was put together just before Tikka upgraded to the T3x, and the Super Lites are the fluted-barrel version of the standard Lite. 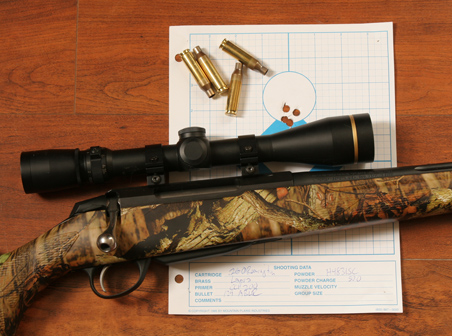 This Tikka T3 Super Lite is part of a special run commissioned by Whittaker Guns in 2014. Tikkas have the reputation for fine accuracy anyway, but 6 3/4 pound rifles don’t always shoot like this.

This run included synthetic stocks finished in Mossy Oak camo, which would give O’Connor a case of his well-known “vapors”—but as a sheep hunter he would have appreciated the weight, 6 3/4 pounds scoped. He’d also have to like the accuracy: The .260’s first 100-yard group was also shot with factory ammo, and three 140-grain Remington Core-Lokts went into 0.44 inch. Of course, it hasn’t shot that well with every kind of ammo, every time, but its primary handload averages around 0.6 inch. Like the .270 Tribute, this is without any tweaking, either of the stock’s bedding or trigger pull.

Darrik Caraway’s latest inspiration is a special run of Tikka T3x Lite stainless rifles in .22-250 Remington, but with a 1:8 rifling twist to accommodate longer, heavier bullets with high ballistic coefficients, for hunting both big game and varmints. They should arrive about the time this column appears in print.

Another very accurate special-run rifle was a Ruger No. 1AH in .25-06 Remington from Lipsey’s, a wholesale firearms distributor. The 1AH was itself a special model, with the small Alexander Henry fore-end combined with a light-contour 24-inch barrel, but the wood was also specially selected European walnut.

Over the half-century since Ruger No. 1s were introduced they’ve have had a mixed reputation for accuracy, but the problem was mostly solved when Ruger started hammer-forging their own rifle barrels in the early 1990s. Early testing with several bullets resulted in a three-shot group of 0.39 inch with 75-grain Hornady V-Maxes and Accurate 4350 powder. I’m always suspicious of single three-shot groups, so I loaded up some more ammo—and four three-shot groups averaged 0.53 inch. The rifle also shot 100-grain Barnes Tipped TSXs and 120-grain Nosler Partitions into groups measuring well under an inch.

These days all Ruger No. 1s are limited-number “special runs” from Lipsey’s, with new configurations each year. There are six chamberings for 2017—.243 Winchester, 6.5 Creedmoor, .270 Winchester, .275 Rigby (7×57), .308 Winchester, .35 Whelen, and .44 Magnum. The most interesting to “modern” shooters might be the 6.5 Creedmoor with a 28-inch barrel, and to traditionalists the .275 Rigby with a medium-weight 24-inch barrel and open sights. (For those hunters who feel the need to use “correct” ammunition, Hornady makes both brass and ammo headstamped .275 Rigby.)

I’ve owned several other special-run rifles that shot better than average for their make and chambering, leading me to suspect they’re put together with more care than everyday production rifles. Somewhat understandably, the manufacturers I’ve asked about this are reluctant to make any firm statements—although they often smile a little when answering. After all, there’s some variation even in carefully made rifles, and perhaps more importantly, among shooters. Leading customers to expect above-average performance would no doubt result in a certain percentage of disgruntled customers.

In the meantime, I’ll keep looking for more special runs myself, as do many other hunters. Some even anticipate them, making requests or even starting to guess, for example, what new configurations of the Ruger No. 1 will appear next year. The guessing and anticipation is almost as interesting—though not as painful—as waiting for a custom rifle.