Why it’s a good idea to use a hiking stick on your mountain hunts.

I guess a fancy word is “seminar,” but let’s just call them “presentations.” I do quite a few, so of course I have to switch them around. I have a fairly new one on “favorite hunts,” naturally including a few mountain hunts, certainly some of my most memorable. I don’t know what’s going on, but this presentation has sparked a question I’ve never heard before, and it’s been asked more than once: “How much longer do you think you can keep doing this stuff?”

Scary, especially with another “sixty-something” (never mind which) birthday coming in a few days. Apparently that’s starting to show! The answer, of course, is that I have no idea. I have noticed that the mountains are getting steeper, and the knees are definitely getting creakier. It’s not yet time to have them fixed—but that day is coming. Every person is different; at the shows I hear about—and occasionally meet—octogenarians who are still able to hunt tough country.
They give me hope! I’m pretty sure I can still get up the mountain for a few more years, but without question the window is shrinking. 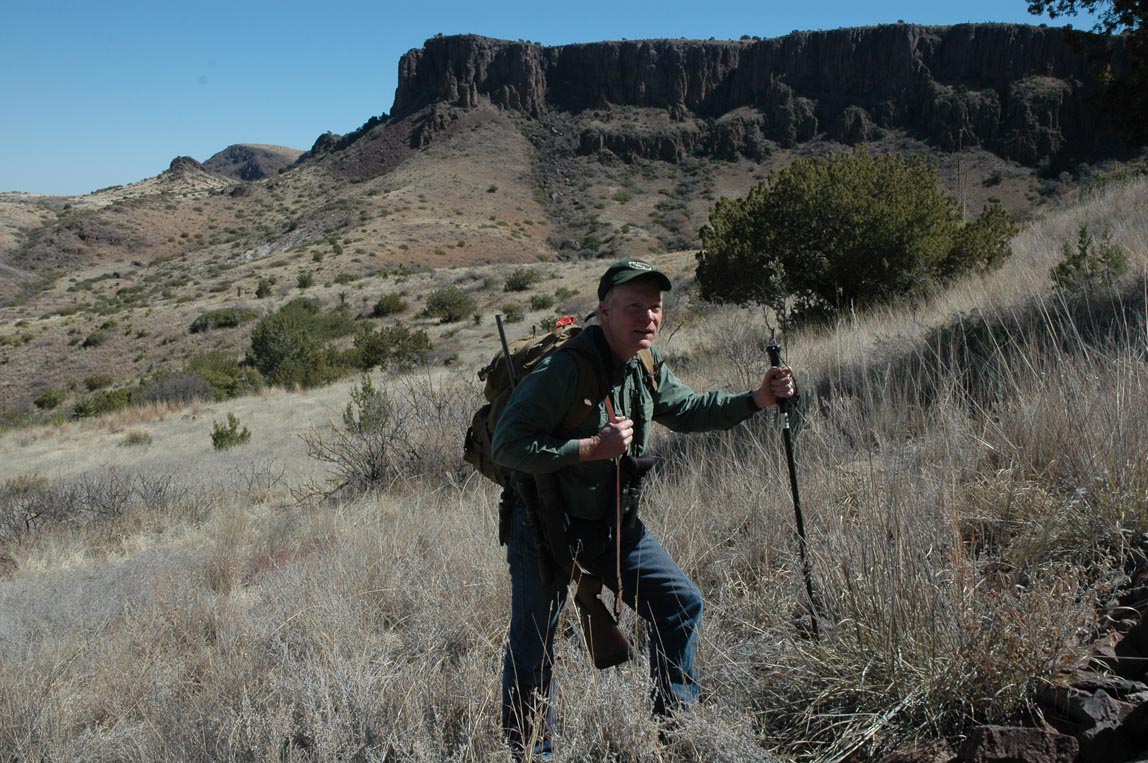 Climbing with a commercial hiking pole in good aoudad country in West Texas. With a single pole I’ll tend to have it in my left hand. This is not because I’m left-handed, but because my left knee is far the worst and needs the support.

The best hedge I know is to keep in shape. I try! I can’t run like I used to; the knees just won’t take it. So I spend more time at the gym and more time walking and hiking. There’s another hedge that really helps, and I wish I’d started doing it a lot sooner than I did: I always climb with sticks. Any sports doctor will confirm that use of a walking stick takes significant pressure off the knees, especially when carrying a load.

Two sticks are better than one. These days, on serious mountain hunts, I carry two adjustable hiking poles. They’re light, and you can get them at any big-box sporting goods store. Honestly, I don’t always use both; with a rifle slung I find it awkward to not have a hand free. And, anyway, my left knee is a lot worse than my right; old injury on that side, just mileage on the other. So one pole often winds up on the pack, but even one helps a lot. Commercial hiking poles usually have removable rubber tips with steel tips underneath. On early hunts the rubber tips are okay, and certainly quieter, which is important for hunting. On later hunts, or any time there might be snow and ice, you want a tough pointed tip that will dig in.

My African addiction is hardly a secret, and the three-legged “African shooting sticks” are almost universal over there. They take practice to get used to, and I can’t tell you how many times I’ve suggested—in print and during presentations—that Africa-bound hunters should get or make a set of shooting sticks and use them regularly. I practice what I preach. We regularly shoot with shooting sticks on the range, and I’m so comfortable with them that I take them almost everywhere…only replacing them with genuine hiking poles for serious mountain hunts.
Folded together, the three-legged sticks, though a bit heavier than necessary, make a very fine hiking staff. There is one caveat. If three-legged sticks are used as a staff it’s important to secure the three legs together—fairly tight—so they are mutually reinforcing. Otherwise, sooner or later, the tip of one leg is sure to catch on something and snap. I’ve broken two sets of good shooting sticks this way!

These days the three-legged sticks I carry are from African Sporting Creations with jointed legs. This allows me to take them down and stow them in the guncase, and also allows them to be used as a lower tripod for support in a wide variety of shooting positions. But this isn’t really about using sticks in their intended role for shooting support, but about the use of sticks, staffs, and poles for hiking and climbing.

Like anything else, some learning is required. I was fortunate. Clear back in 1975 one of the better deals I got from the Marine Corps was a several-month assignment to the Army’s excellent Mountain Warfare School at Fort Greeley, Alaska. Always a bit scared of heights, this almost cured me. We were taught all sorts of useful stuff, including technical climbing with ropes, pitons, and rock hammers; and glacier and river crossings and more. Some of the skills
involve use of sticks, and this is stuff I use on every hunt in hills and mountains.

First off, whatever stick you carry allows a critical third point of contact while negotiating steep terrain. Keep a stick on the uphill side, and lean slightly into the pitch. A staff or single pole can be held in both hands, across your body, offering both support and contact. In Azerbaijan, where the same guides (and now their sons and grandsons) have hunted tur for forty years, there’s a rack of steel-tipped staffs at base camp. The Caucasus Mountains aren’t especially high, but they are extremely steep. This is where Art Carlsberg (the only posthumous Weatherby winner) fell to his death many years ago. Ever since use of a staff is absolutely required…and it really helps!

Downhill is actually worse than uphill, harder on the knees and more dangerous because gravity is trying to pull you down faster than you want to go. Ground the pole(s) before moving your feet, and take it slow, one step at a time. When it’s icy one must be especially careful—steel- tipped poles help—but on open scree and occasionally on snow there’s another technique. You can take your staff or pole and ground it behind you, using it as a brake. Lean back into the pole and put one foot in front of the other, allowing gravity to carry you down. This is called glissading…just make sure there isn’t a drop-off below you! Whether uphill or downhill, if you slip and are sliding down, roll into the slope, face-down. Dig in with stick(s) and toes. And maybe pray a little bit…

Donna, a few years younger with no knee issues, has resisted use of sticks—she likes to keep her hands free. Last year we hunted Dall sheep in the Brooks Range, and this fall, after a couple of previous failures, she got a nice Rocky Mountain goat on a tough hunt in northern British Columbia. I have finally convinced her to use at least one hiking pole. Grudgingly, she has conceded that it helps a lot.

Part of the problem is she hasn’t had any training. More than ten years ago, on one of our first hunts together, my buddy and now partner in several ventures, Conrad Evarts, and I were on a goat hunt in B.C., me with rifle and he with TV camera. Turns out he’d never been in really steep country before, and he thought I was nuts. This business of glissading down a relatively gentle scree slope terrified him. I have never fully conquered my fear of heights, so I finally convinced him that he needn’t be scared unless I got scared. A couple days later, on a particularly bad ascent, I got really scared and we backed off…carefully. To Conrad’s extreme credit, after that hunt he took a mountain training course, readily available in his home state of Montana (and in every mountain range in the U.S. and Canada). If you’re serious about mountain hunting, consider training. It’s important to know what you can do and what you shouldn’t try, and when it’s truly time to be scared. Trial and error is dangerous, and just a little bit of training in proper techniques goes a long, long way.

So, these days, sticks of one type or another are part of my hunting kit. Unfortunately, I’ve now added another piece of essential gear. In B.C. a couple months ago we got Donna’s goat with few problems…but downhill is the worst on creaky knees, and my pesky left knee locked up several times on the descent. So now I’m training with knee braces. They help, and may ward off surgery for a few more hunts. 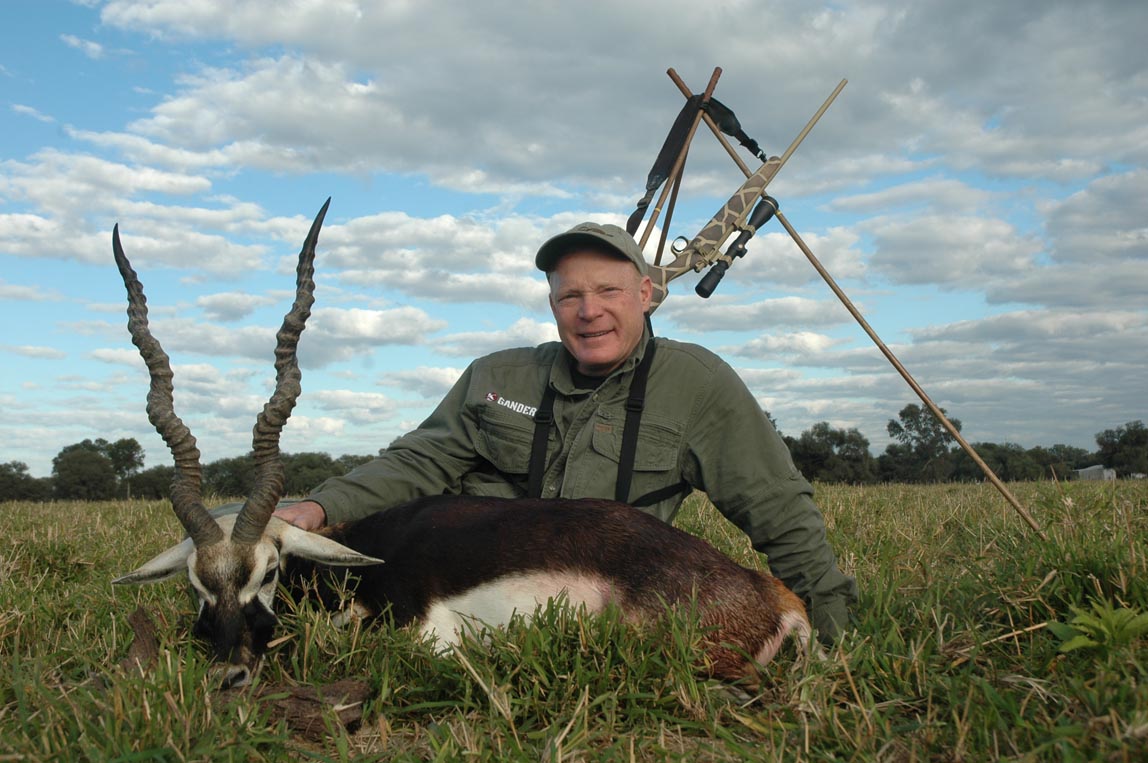 I carry African shooting sticks almost everywhere. They serve as hiking staff, shooting support, and, as a gunwriter, I can use them like this to display the rifle used. In this case that’s Donna’s MGA .270, used to take a great blackbuck in northern Argentina.

Farm in the Bull Mountains