It’s hard to go wrong when you choose between America’s most beloved cartridges.

Yes, it’s absolutely true that I’m a magnum sort of guy, what you might call a “magniac”—at least in certain applications. In the big, open mountains of Asia you will frequently find me carrying a fast .30-caliber. In open country I might make the same choice for the full run of African plains game. On the other hand, for most whitetail hunting you’ll probably find me carrying a 7×57, and recommending its modern equivalent, the mild-mannered 7mm-08 Remington, to my kids and yours.

Among American deer hunters the 6mms and .25s have strong followings, and thanks to the 6.5mm Creedmoor’s sudden popularity, the 6.5mms (.264-caliber) are gaining ground. But if you wrap together the dozens of deer-size game animals and include the occasional elk and black bear, then the most sensible cartridge spectrum probably lies between the 7mm-08 and the magnum .30s. Within that broad range there are two time-honored cartridges that remain among our most popular. This is not just tradition: It’s because they work. They are, of course, the .270 Winchester and the .30-06 Springfield. 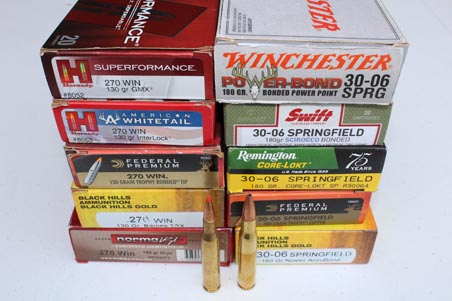 Lasting popularity has its benefits. Everybody loads both .270 Winchester and .30-06 ammo, so there is a wide selection of bullets and loads, available in most retail outlets.

Introduced in 1925, the .270 is 92 years old; the ’06 is 111. Despite the many cartridges that have come (and gone) both remain among our most popular sporting cartridges. Sheer popularity is an asset: All manufacturers load both cartridges, any outlet that sells ammo will have them on the shelves, and both are offered in a wide array of bullet weights and designs. But which one should you have? Legendary gunwriter Jack O’Connor was the great champion of the .270, to such an extent that it’s widely believed today that it was the only cartridge he used. That’s far from the truth; he used a lot of cartridges—and he was also a fan of the .30-06. From 1925 until the end of his life he generally had both. He loved his sheep hunting and the .270 became his personal talisman. He would never admit it in print, but in a letter to Ken Elliott he conceded that the .30-06 was a more versatile cartridge. I agree with that. Since 1976 I’ve usually had at least one of each, and although the .270 is only a .30-06 case necked down to take a .277-inch bullet, I see them as having distinct differences and applications.

Both are excellent deer cartridges. The .270 has adequate power for any deer that walks, and the .30-06 probably carries some overkill. The .270 shoots flatter and has quite a bit less recoil. The .30-06 carries heavier bullets of greater frontal area, and packs significantly greater punch. So, much as I hate to admit it, the older I get the more I think Professor O’Connor was right all along: The .270 is an ideal cartridge for sheep hunting. Wild sheep are not extremely tough creatures; the .270 is plenty powerful, shoots flat, and because its lighter bullets develop less recoil, it can be built into a lighter rifle without punishing its owner. We can all agree the .270 is a great cartridge for deer and mountain game. When I was much younger I questioned its suitability for elk, but that was silly. Of course you can take elk with a .270. O’Connor did, and my wife, Donna, and I both have. You can also take moose with a .270, and in a pinch, good-size bears. In his heart of hearts I don’t think even O’Connor considered the .270 an ideal choice for grizzlies, but over the years he took several grizzlies with his .270s because they were incidental to sheep hunting and that’s what he was carrying. I was hunting with my buddy Mike Satran in Yukon in 1999. He was hunting sheep with his .270 and used it to take a fine grizzly. It charged the horses and he stopped it. Elk, moose, bears: The .30-06 with heavier bullets is an even better tool. 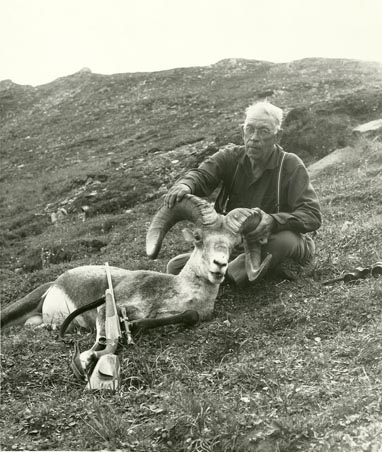 In Africa the .270 isn’t nearly as popular as it is over here. It is an excellent cartridge for, let’s say, “medium plains game” up to perhaps zebra. Donna has used hers quite a bit, and I’ve carried a .270 as the “light rifle” on several safaris. It accounted for one of my sitatungas in Zambia, and it’s been useful on open plains and floodplains where a bit of reach is handy. However, because of Africa’s great variety the .30-06 is a better plains game cartridge. It made its bones on the Roosevelt safari with 220-grain round-nose bullets. It was Hemingway’s preference in 1933, and was Ruark’s light rifle on the Horn of the Hunter safari in 1952. Today we have much better bullets. The 220-grain load is almost obsolete, and there isn’t much one can’t do with a .30-06 and a good 180-grain bullet.

In the 1950s Grancel Fitz became the first person to take all North American species. A generation later my friend J.Y. Jones accomplished the feat, documented in One Man, One Rifle, One Land. Both used .30-06 rifles across the board. This means not only the big bears and bison, but our four North American wild sheep and the Rocky Mountain goat are also included. The .270 shoots flatter, but in these days of fast magnums it’s important to point out that the .30-06 is not just a powerful cartridge; with the right bullets and loads it shoots flat enough for most hunting applications. With carefully developed handloads or “extra-fast” loads like Hornady’s Superformance, the .30-06 can exceed 3,000 feet per second (fps) with 150-grain bullets; 2,900 fps with 165-grain bullets; and 2,800 fps with 180-grain bullets. These speeds almost reach the territory of the .30-caliber short magnums (RCM, RSAUM, WSM), and aren’t all that far behind the .300 Winchester Magnum. As our second magnum era progresses—along with the current fascination for long-range shooting—these are facts we (including me) need to remember.

I will go along with O’Connor’s private summation that the .30-06 is more versatile than the .270: Better for larger North American game and better for the full run of African plains game. On the other hand, the .270 is probably a better all-round deer cartridge, better for sheep and goats, and probably the most perfect pronghorn cartridge. So it depends on your needs; for my purposes I can’t imagine not having at least one of each on hand.