The .375 has reigned supreme as the world’s most versatile caliber for more than a century. As hunting in both Africa and India developed, a consensus grew that hunters of the big stuff were safer and more effective with cartridges of adequate power. Over time the standard minimum for larger game came to be recognized as the .375. Actually, this is more legend than fact: Some African jurisdictions have no legal minimums, and the European equivalent, 9.3mm (.366-inch bullet diameter), is often the actual minimum.

In North America we don’t really need a .375, but a lot of riflemen are fascinated by powerful cartridges. Sales of the big boys have always far exceeded actual need—and today we have lots of big cartridges to choose from. The European 9.3s are available, and the proliferation of over-.40 cartridges is amazing. But the .375 still occupies its traditional position as the versatility king: Cartridges in this bullet diameter tend to shoot flat enough for most game under most conditions, yet the power is there for the really big stuff if needed.
Ah, but which .375? We often confuse cartridges with calibers. The .375, lacking qualifiers, is simply a bullet diameter, a caliber. Unique case dimensions define a cartridge. There are actually quite a few .375-caliber cartridges. Most have enough case capacity to propel bullets of adequate weight fast enough to render them useful on really large game, but a few do not.

Early in the last century the 9.5mm Mannlicher was introduced in Europe. It was a very mild cartridge, but it started to become popular. In 1905 Holland & Holland countered with the .400/375, also a mild (and unsuccessful) cartridge. A generation back Winchester introduced the almost-forgotten .375 Winchester, using light-for-caliber bullets at moderate speeds. All of these, and some others, are .375-caliber cartridges. They’d be fine for black bears and wild hogs…but they are not dangerous game cartridges.

In 2000, in cooperation with Steyr, Hornady developed the .376 Steyr, following Jeff Cooper’s concept of a “big bore scout rifle”—light and handy, yet powerful enough to keep you out of trouble with the big stuff. The case is .30-06-length but slightly fatter; it propels a 270-grain .375 bullet at 2600 fps, meaningful velocity that develops just over 4000 ft-lbs of energy. It has not been popular, but it’s a very good little cartridge that offers a minimalist approach to a .375.

I have a .376 Steyr; the cartridge is absolutely buffalo-capable…but it’s also a useful North American cartridge for tough game. It hasn’t been to Africa, but it’s been as far afield as Greenland for muskox and Donna has it on a bear hunt in Idaho while I’m scribbling away.
Although it fits handily into a .30-06-length action, few manufacturers offer it. Ours is an MGA rifle on a left-hand Remington action. Ammo is single-source from Hornady. In addition to the 270-grain load they offer a 225-grain load at the same velocity. The light bullet reduces recoil significantly for range work, and would be fine for anchoring hogs and such. If heavier bullets or solids are desired, handloading or custom suppliers are the only options.

When most folks say “.375” what they usually mean is the .375 H&H. Introduced in 1912, the .375 H&H is by far the most popular .375-caliber cartridge. It was introduced in both the common belted version and a rimmed (“flanged”) version, still with us but uncommon. With a 2.85-inch case a full-length bolt-action is needed…but every manufacturer who has an action long enough chambers to it. All ammo manufacturers load it and you can find it almost anywhere. Although there are other options “standard” loads are a 270-grain bullet at 2,690 fps and a 300-grain bullet at 2530 fps. By today’s standards these velocities are not flashy, but a spitzer 270-grain bullet shoots flat enough to be used almost anywhere, and the 300-grain bullet has long been proven adequate for any game on Earth.

Proliferation of the “lower .40s” has folks questioning the adequacy of the .375 for big stuff. Although 300-grain solids penetrate well (and 350-grain solids even better) my view is any .375 is marginal for elephant, especially in the heavier cover where most elephant hunting is done today. As for buffalo, the .375 H&H is absolutely fine. This was so in 1912 when the .375 H&H was brand-new. It remains true today. Buffalo have not gotten tougher…but with today’s better bullets the .375 has gotten tougher and even more effective. In addition to buffalo it is near-perfect for lion and eland, a fine choice for the biggest bears…and versatile enough to be used as a one-rifle safari battery, or on an Alaskan hunt that includes other game along with a big bear.

The .375 H&H is the benchmark. All “full-power” .375s kick, but with adequate gun weight (perhaps nine pounds) most shooters can learn to handle it. Its availability and long-term popularity are huge advantages; most African camps will have a cache of .375 H&H cartridges. This is not generally true of other .375-caliber cartridges. 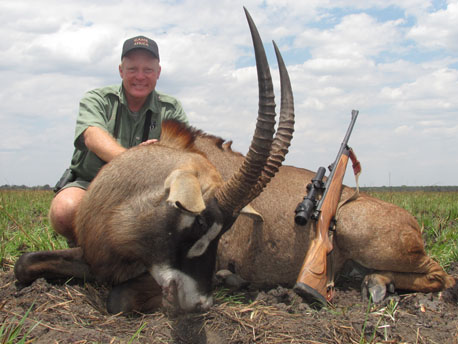 In western Tanzania in 2010 Boddington used a Dakota M76 in .375 H&H. This East African roan was his most-wanted prize; the shot was in open country at nearly 300 yards. That’s getting to be a long poke for an H&H, but if you know the cartridge and its ballistics it will come through.

There are, however, faster .375s, and all are good. Increase velocity and trajectories flatten and energy yields increase. These are good things; they make the .375 even more versatile…and more effective on larger game. This is especially true today because we have tougher bullets able to hold up and perform at higher velocities. The commercially available “faster .375s,” in ascending order of velocity, include the .375 Ruger, .375 Weatherby Magnum, .375 Remington Ultra Magnum (RUM), and .378 Weatherby Magnum. All have two limitations: Increased recoil; and reduced availability. All four are currently loaded by just one major supplier, although handloading and custom loads are always options.

The .375 Weatherby Magnum, developed by Roy Weatherby in 1944, is an “improved” version of the .375 H&H, meaning the body taper has been removed to increase powder capacity. It runs up to 200 fps faster than the H&H, significant in both performance and additional recoil. Its big brother, the .378 Weatherby Magnum, was introduced in 1953. Its case is a belted version of the big .416 Rigby case, meaning it requires an extra-large action. It is a lot faster, shooting nearly as flat as a .30-caliber magnum and developing as much energy as a .458 Lott: Spectacular! However, it has never been popular. Initially this was partly because 1950s .375 bullets couldn’t stand up to the velocity. This is not true today; tough .375 bullets hold up just fine. However, it remains true that the .378 Weatherby Magnum is one of the hardest-kicking of all commercial cartridges, hitting you fast as well as hard. The performance is awesome, but not all shooters can handle it.

The .375 RUM made its debut in 2000. Like the H&H and Weatherby it requires a full-length (.375 H&H) action. With a fat, unbelted case based on the .404 Jeffery case necked down it has more case capacity than the .375 Weatherby, thus in handloads is potentially faster. However, in Remington factory ammo it’s about the same velocity as the Weatherby. Like the Weatherby its increased energy yield makes it hit about like a .416 Rigby or Remington…and it shoots flatter. Also like the .375 Weatherby its primary limitations are increased recoil and greatly reduced availability. However, of these two “fast .375s,” the .375 Weatherby and RUM, the .375 Weatherby has one awesome advantage: Since it’s simply an improved version of the H&H, in a pinch .375 H&H ammunition can be used in absolute safety. Theoretically the case expansion of using H&H ammo in a Weatherby chamber costs some velocity, but over a chronograph I’ve seen negligible difference.

The .375 Ruger is sort of a special case. It used an unbelted .30-06-length case with a .532-inch- width body, the same as the rim and belt of the .375 H&H. Thus it has greater case capacity and more efficiency. A joint project between Hornady and Ruger, when released in 2007 it was probably the most successful large-caliber cartridge introduction in history. However, a decade later Hornady remains the primary ammo source. Due almost entirely to case design efficiency standard loads are about 100 fps faster than the H&H. However, with handloads or “extra-fast” loads the .375 Ruger and the .375 H&H are about equal. It has the advantage of fitting into a .30-06-length action, which results in a lighter, more compact rifle that is usually (like the Ruger Hawkeye) less costly than most .375 H&H rifles. However, even if velocity is the same a lighter .375 Ruger will kick more than the H&H. After the H&H the .375 Ruger is the second-most-popular .375-caliber cartridge. Its availability is thus second—though a distant second—to the H&H.

So, which one to choose? Honestly, I like them all, except that I admit that the recoil of the .378 Weatherby is too much of a good thing for me. I’ll go for the majority vote: The .375 H&H makes the most sense, followed by the .375 Ruger. In performance on game there is no noticeable difference between the two, and difference in recoil is mostly dictated by gun weight. Higher velocity and increased energy are really not needed, but if you feel you must have them the .375 Weatherby and .375 RUM are also indistinguishable. I’ve used both; they hit buffalo noticeably harder than the H&H or Ruger…but the cost in added recoil is also noticeable and must be considered. I like the modern case design of the RUM a lot, but if you want more velocity (I said “want”—you really don’t “need” it) the nod must go to the .375 Weatherby Magnum. Not only can .375 H&H ammo be used; almost any .375 H&H rifle can easily be converted to .375 Weatherby Magnum by opening up the chamber, a simple reaming job—and .375 H&H ammo can still be used. 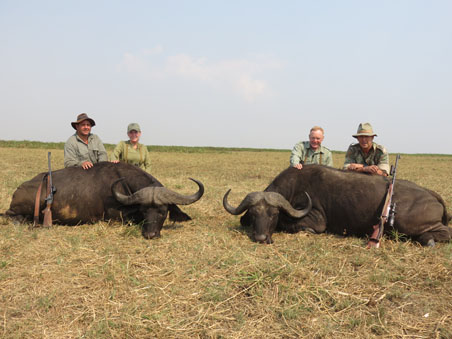 Some people question the adequacy of the .375 for buffalo. It remains perfectly adequate: Craig and Donna Boddington took these bulls from the same herd with a total of three 300-grain Hornady DGX bullets. The single follow-up shot probably wasn’t needed.