Is it better to bring your own rifle on an overseas hunt or to borrow one from the outfitter?

If you’re a dedicated gun enthusiast, part of the fun in planning any hunt is figuring out just exactly the perfect rifle, cartridge, and load to bring. Even if you’re more of a serious hunter than a rifle nut, it may seem just as important to bring a rifle that’s a comfortable old friend, one in which you have total confidence.

I’m a bit of both, but these paths don’t always coincide with my job. Whether I’m writing articles or involved in that strange phenomenon we call “outdoor television,” I often don’t get to use my own favorite rifles. Therefore, it’s extra fun when I can start from scratch, planning a hunt and deciding which favorite old rifle I’ll bring with me.

My next major hunt, to Congo, started out that way. My primary quarry is dwarf forest buffalo. They’re small, maybe 700 pounds, so a cannon isn’t needed, but they are buffalo, and encounters are likely to be close. The area also has a lot of bongo. I don’t want another bongo, but Jason Hornady and I are hunting together and the bongo is his main quarry. There is other game, so versatility is needed. Forest hunts are hard on equipment, and the rains should be starting. Not a good place for a nice rifle, and you need something light and fast-handling. I decided on my Ruger Hawkeye in .375 Ruger, and Jason made the same decision.

Then we learned that it’s difficult to bring rifles into Congo and we needed to use “camp guns.” So, we inquired as to exactly what these might be. Once in a while great minds really do think alike: The rifles we’ll be borrowing are Ruger M77 Hawkeyes in .375 Ruger…with 300-grain Hornady DGX.

Don’t count on coincidences like that, however. I’ve hunted in a number of places where it’s impossible to bring firearms. Ghana, Liberia, Peru, and the Philippines come quickly to mind. You use what they have. Otherwise, there’s a conscious decision: Bring or borrow? I travel with firearms a lot. So long as you follow the rules problems are rare, but there are extra hassles: More paperwork, protracted border clearances, necessity to safeguard them, and schlepping that heavy case all over the place. It’s easier to travel without firearms! So, honestly, when I learned we couldn’t bring our guns to Congo one part of me was bummed…and the other part was relieved! 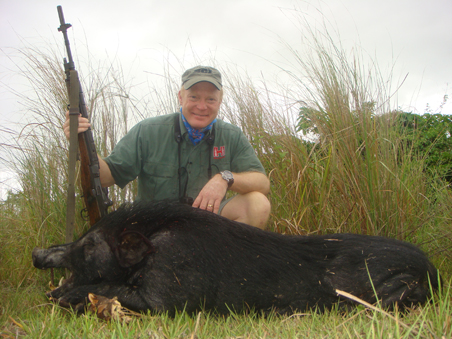 The Philippines was a place where firearms could not be imported, and private ownership is pretty much limited to shotguns. The lone outfitter, now deceased, borrowed M14s from the local gendarmery! This is a Philippine bearded warty pig, taken with an M14 using military ammo.

Because it’s simpler, a lot of hunters leave their guns at home. The wisdom of this depends on the destination. In Africa, Europe, both Americas, and the South Pacific, most reputable outfits have suitable firearms available. If, by local law, you can’t bring a gun, it’s common for both firearms and ammunition to be supplied. If you can bring your firearms but choose not to, then gun rental and/or ammunition fees are common. This doesn’t seem out of line to me. Firearms and ammunition are expensive. Normal wear and tear is unavoidable and there is genuine risk of damage. Don’t be surprised if borrowing guns isn’t free. If you are considering not taking your own firearm(s) ask your outfitter what they have available for you to use—and what the charges might be. Only then can you make a considered decision.

Oh, I left Asia out. In Asia, “good” rifles and optics are probably the rarest on the planet. You could well be handed an open-sighted military rifle! There are exceptions; a few outfitters have managed to obtain one or two good camp rifles.

Some countries are also exceptions. There are plenty of good guns in Pakistan and Turkey because both countries have strong hunting cultures. I’ve taken my own rifle on most of my Pakistan hunts, no problem, but last year I did a hunt for axis deer and wild boar with Pir Danish Ali and there was no time for a gun permit. Danish had an accurate Blaser in 7mm Remington Magnum and, very cool, a Winchester Model 70 7×57. Then came a big surprise. Danish organized a driven partridge hunt and hauled out the camp shotguns: well-worn but very fine English doubles! You bet, there are some very fine guns in Pakistan. 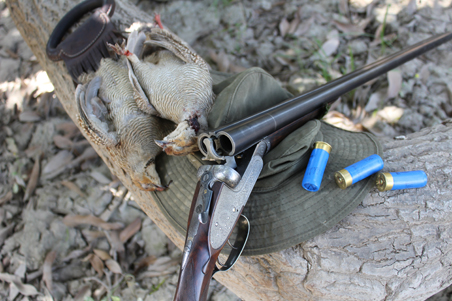 For an “add-on” driven partridge shoot in southern Pakistan the Indus Safaris team trotted out a selection of fine British doubles. I used a gorgeous Boss sidelock, a far better shotgun than anything I’ve ever owned!

Aside from legalities and pure convenience, there are other reasons why it may be difficult or impossible to bring your own rifle. For instance, anyone planning a European stopover or other tourism before or after a hunt can have problems.

The last three aren’t common, but do happen. Usually misplaced bags turn up in a day or two; permanent losses are almost unheard-of today. Against this eventuality, good insurance is the only assurance. Delays are not as unlikely, but when bag(s) are delayed you usually don’t know when they will turn up. This creates hard choices because, increasingly, you must personally do the Customs clearance. Thus, you either wait for them, losing valuable hunting time; or you go on to your hunting destination, hoping that your bags will catch up if that is possible; or they will be held by Customs until you return to that airport for your trip home.

Obviously, this varies with the country. Your outfitter has dealt with it before and will offer whatever solutions exist. But there are certain things you should do against the last three eventualities.

1. Activate “international calling” on your cell phone, carry a satellite phone in your carry-on, and have phone numbers for your outfitter, travel agent, and booking agents so that you can notify everyone as soon as you know bags are delayed. Traces can be started and alternate plans can be laid.
2. Pack your carry-on as if this is the only bag you will receive. I’ve said this before, and it remains critical. All medications, camera, binoculars, extra eyeglasses. You can beg, borrow, or buy enough clothes and toiletries to get by, so think it through…and wear shoes you can hunt in.
3. In the second instance, receiving gun case but no duffel, consider avoiding oddball cartridges. This is why I have a lifelong aversion to wildcat cartridges. There are good gun shops in Namibia and South Africa that will have common cartridges, likewise Europe, Australia, and New Zealand. Elsewhere you must rely on “camp stashes,” which may be nonexistent, but in my experience, depending on where you are, most likely are .270 Winchester, 7mm Remington Magnum, .308 Winchester, .30-06, .300 Winchester Magnum, maybe .300 Weatherby Magnum, maybe .375 Ruger, and definitely .375 H&H. I took a .264 Winchester Magnum to South Africa a couple years ago and, sure enough, I got the rifle but it was a week before I got my duffel. I figured it was hopeless, but Safari & Outdoors in Pretoria loaded me up some .264 handloads! I have also purchased 7mm-08 in Namibia. But neither cartridge is likely in remote areas.
4. If you can’t match your ammo, and definitely in the third and fourth cases, you’re gonna borrow a rifle and ammo. This doesn’t happen often, but it does happen…so why not prepare for it? When booking a hunt, perhaps these are “what-if” questions you should ask: What firearms and ammunition does the outfitter have on hand (or readily accessible)? What are the fees for gun rental and/or ammo used? Plans are good. Backup plans can be even better! 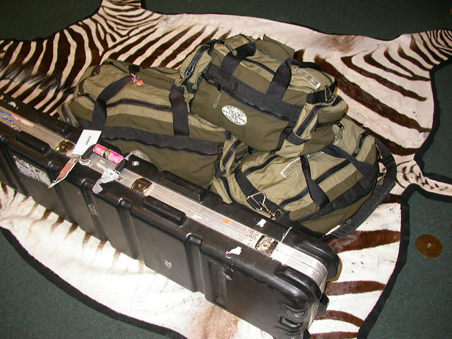 You pack your bags with high hopes but, realistically, although delays are rare there is never any real guarantee your bags—or your rifles and ammo—will arrive on schedule. It’s wise to know what alternatives are available…and mandatory if you plan on borrowing or renting firearms.