What’s behind the alarming drop in caribou numbers in North America?

With their spectacular migrations and stunning, widespread antlers, caribou are icons of the North and of enduring wilderness. While moose, deer, bears, and a host of other wildlife species will live in our backyards, caribou will only be found in the wild, untrammelled spaces, far away from humans and our congested world. Since their first appearance in Alaska more than a million years ago, the species has helped shape and define the northern reaches of the continent, their movements tattooed upon the land’s surface in spider web trails and their close passing accompanied by clicking steps unique in the ungulate world.

They can be found from coast to coast in North America, inhabiting mountainous regions, northern forests, and the expansive Arctic tundra. Forever wandering, caribou are integral components of these northern ecosystems, influencing vegetative structure and nutrient cycling over vast areas and serving as the most important prey base for other high profile wilderness species, wolves in particular. For indigenous peoples living in these remote areas, caribou have been critically important to their very survival and remain a foundational component of their cultural identities and mythologies. Northern communities, indigenous and non-indigenous alike, still rely on the harvest of caribou as an important food source and the annual caribou hunt is a tradition that has been shared for generations, indeed for millennia in the case of indigenous groups.

Caribou have also been vitally important to local and regional economies, beyond their contributions to human food security. Recreational hunting provides direct income to many families living in northern, rural communities, and caribou outfitting operations and guided hunts bring tourists and their dollars to these distant regions. Thousands of caribou hunting permits are provided each year in Canada and Alaska for use by indigenous peoples, and local residents and non-residents alike. Indeed, 3,500 American hunters alone head to Canada each year in search of caribou, supporting an outfitting industry that is worth millions of dollars annually.  In Alaska, just the sale of caribou tags for guided hunts brings in over $100,000 a year. When you include the revenue from non-guided hunts, and payments for local accommodations, food and transportation, the value of the outfitting and the wider hunting industry quickly adds up. It provides much-needed cash to economies that struggle on the economic and social margins where employment and business opportunities are hardest to deliver. For these many reasons a North American north without caribou would be like a sea without fish–empty, aberrant, and incapable of supporting human communities in any traditional sense.

Unfortunately, caribou have not been faring well in recent years. Population declines have affected herds across the continent. In fact, by 2017, most caribou herds that have been assessed were in decline, some of them falling rapidly and to alarming extents. Across North America these caribou herds can be divided into four groups, also known as ecotypes, based on the habitat they live in: woodland caribou are found in the boreal forest, mountain caribou are found in mountainous regions of western North America, barren-ground caribou live across the expansive mainland Arctic tundra, and the small, white, Peary caribou are found on the islands of the high Arctic. The overwhelming majority of these animals live in Canada and Alaska. In fact, the only caribou left in the contiguous United States consist of about a dozen mountain caribou that are found in a tiny pocket of habitat in Idaho and northeastern Washington. The other populations south of the Canadian border blinked out late in the late nineteenth and early twentieth centuries, in New England, Minnesota, Michigan, and Wisconsin. What is striking about the current decline is the fact that caribou populations from all ecotypes are affected and the declines have been reported from across the entire species’ range. This makes the search for a unifying cause quite problematic, as many factors vary from place to place.

Even within a geographic region, however, caribou populations can be influenced by significantly different ecological circumstances. Thus, in the far eastern part of their distribution, in Quebec, Labrador, and the island of Newfoundland, there are migratory barren-ground caribou and woodland caribou in the two former regions but woodland caribou only on Newfoundland. In Quebec and Labrador wolves play a significant role in caribou population dynamics, as they do in most caribou herds, but these predators are effectively absent from the island of Newfoundland.  Yet virtually all caribou populations in these quite different regions have very significantly declined in the last two decades. Major barren-ground herds like the George River and Leaf River, centered in Labrador and Quebec, respectively, have declined by 95 and 50 percent, while the smaller woodland herds of Labrador, such as the Lac Joe, the Mealy Mountain and Red Wine, have declined by 90 percent or more and are classified as Threatened under both federal and provincial legislation in Canada. Meanwhile, the numerous Newfoundland herds have fallen by 70 percent or more and everywhere the declines appear to be continuing. So, what can explain these observations and what do they mean for the future of this magnificent animal and the human hunting traditions so long associated with it?

Most biologists will likely agree that the greatest threat facing caribou throughout their range is habitat loss and fragmentation. In the far North especially, their tundra habitat is threatened by climate change, while, farther south, industrial development is fragmenting and destroying their forested range. Mining, forestry, and energy development all require infrastructure, such as roads, seismic lines, and camp installations; and they all involve an active presence by significant numbers of people and associated machinery. Caribou generally avoid these features, especially ones where activity is taking place. This avoidance drastically impacts their ability to use the landscape, and to space away from predators and take advantage of seasonal food sources. Predation is also a major threat, of course, and it is thought that predators are aided by human disturbance. For example, corridors cleared for roads in the boreal forest allow wolves to penetrate deeper into those ranges where caribou exist. Even as governments, scientists, and local communities work to conserve caribou by minimizing such threats and protecting habitat, the scale of industrial intrusion to caribou range continues to increase, and as a warming climate enhances conditions for human travel and habitation in the north, this pattern will only continue. None of this bodes well for the great wilderness of Canada and Alaska, nor for the caribou that inhabit these lands of mystery and wonder.

In the meantime, low caribou numbers mean hunting restrictions are in place for many herds. For example, the Northwest Territories has banned all commercial and recreational hunting of barren-ground caribou since 2007. While hunting is allowed in some herds of barren-ground caribou in Nunavut, Manitoba, and Alaska, the migratory herds found in Northern Quebec and Labrador have recently been subject to severe hunting restrictions. The George River herd, which once numbered more than three quarters of a million animals has been closed to all hunting since 2012, including a voluntary suspension in subsistence harvest by most Indigenous groups. The Leaf River herd of Quebec will be closed to sport hunting starting in 2018. Woodland caribou, meanwhile, cannot be hunted in any province in Canada, except on the island of Newfoundland, while mountain caribou cannot be hunted in their very small population in the United States, but limited hunting is still allowed north of the border.

So what is the future for caribou and will they return to their former abundances?  How long might this take? Indeed, is it possible these alarming trends will worsen? The truth is that none of us know the answers to these questions, at least not for certain. Caribou populations experience 60- to 90-year cycles of abundance and usually remain at low numbers for many decades following a severe decline. In the past, they have gone through such cycles across their range but recovery has always followed decline. We should also note that while overhunting may have contributed to these previous losses there is no indication that legal hunting has been a factor in recent declines.

The real question for caribou, and for us, is whether we will leave the land for them, undisturbed and in sufficient expanse to accommodate their natural need for space. It will also depend upon whether the rapid changes in climate will outstrip the natural capacity of these magnificent animals to respond and adapt. Already we are seeing signs in the high arctic that caribou and their forage species may be out of synch and that the recoveries we hope for and might otherwise expect, will elude us and them. The prospect of boreal and arctic landscapes devoid of these animals is virtually unthinkable. The challenge looming before us is how to render such a nightmare scenario impossible. 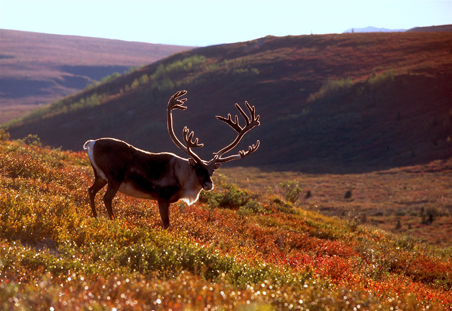 Caribou populations across North America are experiencing alarming declines. Biologists aren’t sure of the reasons, but a variety of factors are likely in play.  [Photo by Ron Spomer]