Discovering the bounty of white-winged doves and colorful ducks along Mexico’s Sea of Cortez.

There’s something almost magical about watching an expert wingshot. The way the shotgun comes up as if an extension of the shooter’s body; the long smooth moment when the bird and the barrel seem to move as one; the shot that brings the bird down cleanly, folding and dropping.

“Nice shot,” I said admiringly as my hunting partner, Tim Joseph, dropped a widgeon into the water. The sun was coming up behind us and casting a rosy glow onto the calm waters of the Sea of Cortez. I shifted slightly on my stool, which sat on a temporary platform built along a marshy shore redolent with mud and saltwater. A screen of tall reeds and grass hid us from the decoy spread. A warm breeze touched my face; the morning had a balmy, tropical feel.

There was a sudden flurry overhead and Tim and I ducked low behind the reeds. A flock passed above us with a chorus of whistling wings. The birds wheeled, stalled, and several ducks came straight for our decoys, wings cupped.

“Now!” Tim said. We stood up and both shotguns spoke. Three ducks dropped and the rest roared back into the air as we shoved more shells into our guns and grinned at each other.

“Incoming!” I swung smoothly on a passing pintail and pulled the trigger just as the barrel cleared its beak. Smoke curled from the muzzle of my shotgun as I watched the duck splash down in front of the blind, a single feather drifting down after it in the still air.

The action continued all morning–flocks large and small, pairs and singles, some aiming straight for our decoys, and others whistling on past, presenting us with a variety of challenging shots. Tim accounted for the lion’s share of our morning’s bag, but I was pleased with my own stack of ducks, primarily widgeons, redheads, and pintails.

As Vice President of Marketing for Benelli, Tim has been honing his wingshooting skills for many years, chasing ducks, geese, doves, and upland birds from coast to coast. He and Josh Ward, who handles PR for Benelli, had invited me, along with a group of other writers and editors, on a mid-December trip to sample some of Mexico’s fabled duck and dove hunting and to put Benelli’s 20-gauge Ethos shotgun through its paces. Our hunt was based out of a comfortable lodge in the modern, bustling city of Ciudad Obregon in southern Sonora. 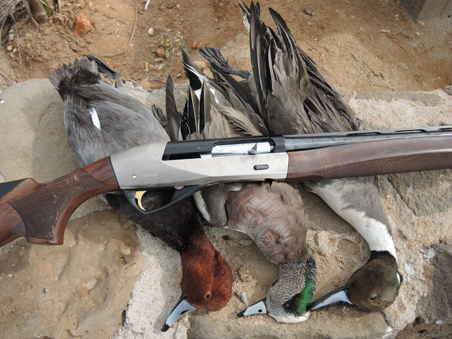 Obregon is in the Yaqui Valley, part of Sonora’s coastal agricultural region. This part of Sonora is the staging and feeding ground for wintering Pacific flyway ducks, and from November through March it is home to an estimated population of 2 million ducks–pintails; gadwalls; green, blue, and cinnamon teal; black ducks; canvasbacks; Pacific black brant; widgeon; redheads, and many others—sixteen species in all. Mexico’s liberal bag limits and the sheer diversity of species makes this a can’t-miss destination for anyone who wants to experience duck hunting the way it must have been in the “good ol’ days” north of the border.

Hunters are delivered via airboat to natural and man-made blinds along shallow-water estuaries, marshes, and freshwater ponds adjacent to grain fields. We shot over a decoy spread on a saltwater bay one morning, and over a small freshwater pond on the next.

Having a chance to duck hunt by the ocean is a rare treat for me, and between flocks I savored the balmy salt air and the muddy smell of the shoreline marsh. By the time the sun was well up, Tim and I had accounted for a good number of ducks, and more just kept coming, many getting more suspicious and slicing past us with fast fly-bys that made for challenging crossing shots. It was a blast.

Every hour or so the deafening noise of the airboat shattered the peaceful bay as the guides roared past, scooping up the ducks we had dropped and piling them in the bow of the boat. Once they’d retrieved the birds, they returned to the dock and quiet would descend once again on the bay, punctuated only by the periodic pow-pow-powof our semiautos when a new flock came in for a closer look at our decoys. Several times I was privileged to hear that distinctive whistling sound made by the wings of a large flock passing low over our heads, something I had read about but had never experienced firsthand. 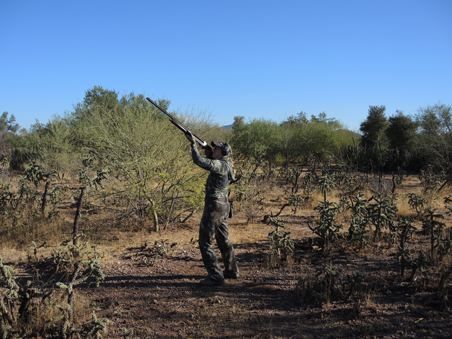 The vast fields of sorghum, sesame, corn, and cereal grains in the Yaqui Valley region, bordered by thick, brushy areas of mesquite and chaparral, support millions of both white-winged and mourning doves. These are resident birds that trade back and forth between the fields and cover year-round. It was my first time shooting whitewings, which are large, strong-flying, beautiful doves. On our first afternoon we set up near a power line in a lovely field studded with mesquite brush as well as a variety of beautiful, spiky cacti, including ocotillo, cholla, and prickly pear. Doves were whirring overhead before I could even fumble the first few shells into my gun.

Each shooter had his or her own “bird boy,” whose job was to help us spot incoming doves, keep us well-stocked with shells, and pick up the birds we dropped. Assigned to me was Edgar, a bilingual and well-traveled young man in his twenties, and throughout the shoot we chatted amiably about hunting and places we’d been. The action was nearly nonstop, with concentrations of doves to rival those in South America, and the shooting was incredibly challenging. Before long I had picked up enough Spanish to be able to make excuses for missing in two languages.

But the doves seemed plentiful beyond numbers, and Edgar tossed more and more of them into my slowly growing stack.

During occasional lulls, Edgar told me about the culture of the Yaqui Valley. We had arrived on December 12, the day Mexico celebrates the Feast of Our Lady of Guadalupe, and on our way to the dove field we had passed an impressive shrine carved into the side of a mountain, with a crowded and colorful fiestagoing on below. Edgar explained that people walk and drive from all over the region to pay their respects to the Virgin Mary and say some prayers, and then they hang around to socialize and drink a few cervezas with friends.

I was impressed at the ability of all the bird boys to spot and find nearly every dove we dropped, no matter how fast and furious the shooting. At the end of the day, the communal pile of dead whitewings and mourning doves was impressive. Happily, the joy we had in shooting these birds was not the last they would provide. As we drove back to the lodge, we detoured through a hardscrabble village along an irrigation canal; its residents would be the grateful recipients of the day’s bag. A group of barefoot kids spotted the logo on the outfitter’s truck and darted out of small adobe houses, racing across yards of packed dirt to meet us with joyous shouts of “Palomas! Palomas!” (Doves! Doves!)

On our last evening in Mexico, we sipped frothy margaritas in the cool shade of the lodge patio and sampled homemade guacamole as a mariachi band entertained us. In the morning we would head north again, taking with us memories of balmy mornings on a saltwater bay, warm afternoons in a field of cacti, and the sound of wings in the Mexican sky.

If You Go: Hunting in Mexico

Plenty of bird hunters fly right over Mexico on their way to more famous wingshooting destinations in South America. After experiencing the incredible dove and duck hunting on the west coast of Mexico, though, I’m not sure why. This region is a much shorter flight for the average American hunter and offers tremendous numbers of doves—both whitewings and mourning doves—and a huge variety of waterfowl. Best of all, you’ll be escaping to the tropics when winter is clamping down north of the border. Travel to Mexico gets a bad rap these days, but we flew into Hermosillo and drove south to Ciudad Obregon with the outfitter, and I never felt the slightest bit unsafe. Gun importation, facilitated by our outfitter, was no problem. Timing is important, of course. The best dove shooting is August through October, while the best waterfowl hunting (including a chance for Pacific brant) happens in the winter months. Our trip in mid-December was a bit of a compromise, providing good shooting for both doves and ducks although not the highest concentrations of either.

Frank “Gabino” Ruiz runs Gabino’s Outdoor Adventures, headquartered in a comfortable, welcoming lodge in downtown Ciudad Obregon, and he offers hunts all over Sonora’s Yaqui Valley. You can book this hunt through Ramsey Russell’s GetDucks.com.

What to Take: The Benelli Ethos 20-gauge

The star of the show on this Mexican hunt was actually a beautiful Italian—the Benelli Ethos 20-gauge shotgun. The Ethos is a sleek, nimble, graceful semiauto. Originally produced in 12-gauge, Benelli added the 20-gauge version a couple of years ago (it now comes in 28-gauge as well), and its light weight and easy-swinging feel is ideal for the long days in the field and hundreds of rounds you’ll shoot at fast-moving birds when you’re hunting south of the border.

The Ethos has an elegant, traditional look, with an AA-grade satin walnut stock and nickel-plated and engraved receiver. It’s designed to be exceptionally practical as well, with an inertia-driven action, progressive comfort recoil-reduction system, and lightweight carbon-fiber rib with interchangeable fiber-optic sight. It’s easy to load thanks to a beveled loading port, redesigned carrier, and two-part carrier latch that allow shells to glide into the magazine quickly, which is great when the doves are coming in one after another. In several days of hunting I never had a problem cycling even the lightest loads. The Ethos also has a slightly oversized trigger guard that is great for shooting while wearing light gloves, as I prefer to do.

It’s a cinch to disassemble for cleaning, too, with a magazine cap that unscrews easily and doesn’t bind in dusty or muddy conditions. The Ethos comes with a custom-fitted hard case, five choke tubes (cylinder, improved cylinder, modified, improved modified, and full).