Women are taking to the hunting fields in increasing numbers.

This past year my good friend John Stucker did a really fine thing, something that I very much wish I’d been able to do: He took his Mom to Africa. She loved it.  My Mom would have loved it. Not to make excuses, Mom wasn’t the problem: Dad wouldn’t go. He flew off carriers in the Pacific; at the end of war he climbed out of his F6F and swore he’d never again fly over blue water. We had some great North American hunts, but Pop never again crossed an ocean.

I should have taken her after Dad passed away—she would have gone—but I lost a couple years to the new Gulf Wars and then, health-wise, it was too late. Mom could have been a serious hunter. She was a great pistol shot and when I was a kid she’d often hunt quail or pheasants. She had an English degree and as long as she was able to read she devoured the outdoor magazines and made brutally accurate comments on my stories. 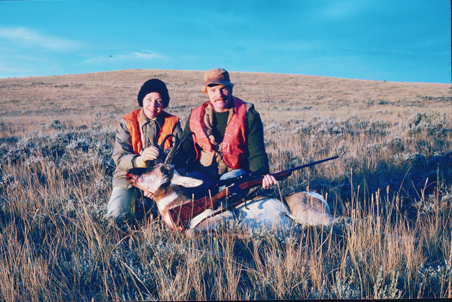 Craig Boddington with his mom on an antelope hunt in 1978.

Mind you, there have always been serious female hunters. Some, from the goddess Diana forward, have been legendary. But it wasn’t common. In previous millennia, until now, in order to hunt women had to break through the good old boys’ club—or just do their own thing, which was probably almost as difficult. My Mom didn’t try to “intrude,” but in her heart she was a hunter. Regrettably, she started down the long, horrible Alzheimer’s road quite a long time ago. She would have gotten a huge kick out of the major role women are playing in modern hunting!

Whether we’re talking hunting or shooting sports in general, women are the fastest-growing segments. Relative to hunting, the reality is that women represent some of the only genuine growth in our ranks. So, God bless ’em, and welcome! I think most barriers have been broken…but there are still some Neanderthal holdouts among us. My old friend and veteran hunting consultant Bev Wunderlich  tells me there are still a few outfitters who don’t welcome women into their camps, and there are probably some hunting camps here and there that feel the same. Some guys still need to grow up!

Fortunately, we’re mostly past that. The secrets we males tried to keep for thousands of years are now known to the growing group of female hunters: Hunting is exciting, exhilarating, challenging…and just plain fun. Also, often, exhausting, frustrating, and disappointing–and thus all the more rewarding.

My Mom’s problem was historic; in her day, hunting was retained as a guy thing. Young women were rarely offered the opportunity and mentoring of their male siblings. My sister was not, and to this day doesn’t really understand it. Mentoring is important, because this is a complex activity to delve into. Today our world has changed, in this area for the better. It’s commonplace today for male hunters to introduce their partners to hunting, and for parents to introduce their daughters and sons equally. In our changing society, it is increasingly common for women who hunt to offer it to their non-hunting partners; and for single mothers to mentor their children.

For residual Neanderthals who question the abilities of women in the field I want to share a few thoughts based on experience. First, physical capabilities. It’s true that, on a level playing field, men tend to have greater upper body strength, and thus are possibly better at certain tasks such as dragging and loading heavy animals. But the playing field isn’t level, and there’s no point comparing oranges to apples. Across the board it depends on general health, physical condition, and age. In terms of getting up the mountain, trust me, there’s no gender advantage or disadvantage. I can probably carry a heavier load than Donna—I outweigh her by a third. On the other hand, I can’t possibly keep up with her on an uphill hike!

Second, overall expertise. This depends entirely on experience. Thanks to the good old boys’ club highly experienced female hunters are uncommon, but they’re out there, and increasing. Female guides are probably an even smaller minority, but I’ve been guided by some good ones (and no bad ones). On a hot October hunt in coastal Mozambique our PH was Debbie Visser, who is tough as nails. She walked us into the ground in hundred-plus heat. Debbie is very good on buffalo, and I have no question of her abilities with the .404 Jeffery she carried. 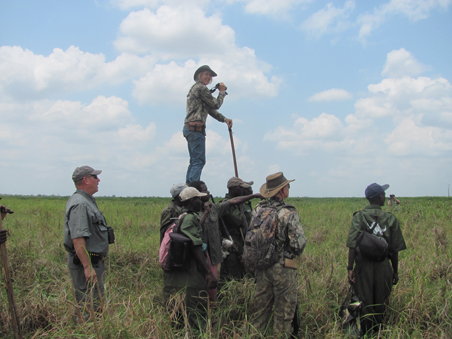 In coastal Mozambique Debbie Visser, an excellent PH, gets hoisted up on a pole so she can glass for buffalo over the sawgrass and papyrus.

On Donna’s 2013 Alaska brown bear hunt we had the pleasure to be guided by Alisha Rosenbruch-Decker, also tough as nails. A year or so later she finished a brown bear hunt just days before giving birth to her second child (try that, guys!). This young lady knows her bears. She performed the most amazing feat of judging a bear that I’ve ever seen, and then orchestrated a perfect approach. At that time she was still too young, but now she holds Alaska’s coveted Master Guide rating. I understand she is only the second woman to be an Alaskan Master Guide; her mother, Maryanne Rosenbruch, was the first.

It’s no secret that I’ve spent much of the past few years chasing the Weatherby Hunting and Conservation Award. Previously, my old friend Natalie Eckels was the only woman nominee; sadly, she never won. Recently two strong female contenders joined the fray. When, after much cajoling, Renee Snider finally got her ballot together, I knew she’d be unstoppable. Renee has hunted darn near everything, and is one of world’s most accomplished mountain hunters. In 2014 she became the first woman to win the Weatherby. The second was Barbara Sackman, who is the hunting partner and wife of 2008 Weatherby winner Alan Sackman. Barbara won in 2015. In more than a half-century of the Weatherby no woman had ever won, and in 2014 and 2015 two women won it back to back. That may not be a trend, but it’s a statement!

Finally, shooting ability. Gentlemen, we don’t have a chance! Once again women are often at a disadvantage because of experience–few grew up shooting like many boys do. They make up for it quickly. For unknown reasons females approach this stuff more calmly than men, and they lack bad habits and preconceived notions. Anyone who teaches shooting will confirm this: Women listen, and tend to shoot very well. This has consistently been my experience with my family, including a long procession of nieces and my daughters’ friends that I’ve taken to the range for their first-ever shooting experience. Consistently, they find it fun, and for a woman in today’s world a word I often hear is empowering.

Regarding hunting, some folks will take to it and some will not. With Donna and two daughters that are most definitely hunters I’m quite sure gender has nothing to do with it. Instead, it’s just as Robert Ruark wrote 65 years ago: “The hunter’s horn sounds early for some. . .later for others. For some unfortunates…the horn of the hunter never winds at all.”

So you never know. Some hunters have sons who are not interested but daughters who are. It does require opportunity. This is relatively easy for children and partners of hunters, but how might an adult woman with no previous exposure know if she might be interested in joining our ranks? This is something we should ponder.

We as hunters are not growing in numbers. At best we’re holding steady, which means we’re declining as a percentage of the population. Recruiting youngsters has been our mantra, and it’s important—but as our society grows ever more urban we are losing hunters to city jobs and city life, and they are losing the opportunity to bring their children in. The influx of women into our sport is thus of critical value in the numbers game. It also alters our image from the stereotypical male redneck hunter. This alone is important, but women can also be passionate and eloquent spokespeople for hunting…and perhaps more likely to be listened to than folks like me!

My daughter Brittany, together with British Columbia hunter and licensed guide Shannon Lansdowne, is a couple of years into running an outdoors training program for women called “She Hunts Skills Camp” (www.shehuntsskillscamp.com). There are other similar programs, some unisex, others designed for women. Hunting is not the easiest pastime to break into, and sometimes parents and partners aren’t the best teachers. Training is a great way to get exposure and see if you like it or not.

Just last week I joined the latter part of a session at Jeff Rann’s 777 Ranch to give the ladies a brief seminar and range session on dangerous game. I was there in time to share the excitement when several women—from teens to 50s—took their first game animals. Wow! Trust me, hunting isn’t just a guy thing. 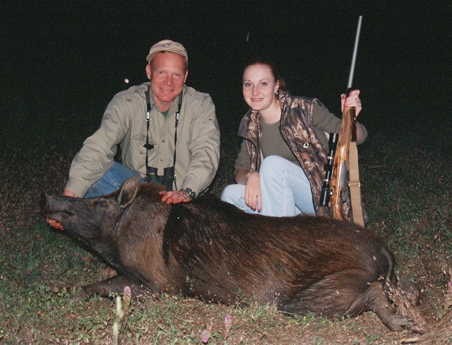 Brittany Boddington with her first game animal. Wild hogs are perfect for beginning hunters because they’re tasty…and they aren’t cute and cuddly. Brittany has been a serious hunter ever since she shot this hog.