On January 3, 2018, the world’s most exclusive band of international big-game hunters gathered in Dallas for the 61st Annual Weatherby Award dinner to honor one of their own, Craig Boddington.  This year’s recipient is, arguably, also one of the hunting world’s best-known gun writers, and Craig’s latest work, From the Cape to Kasserine, was one of the night’s sixteen auction items, donated to help replenish the coffers of the Weatherby Foundation.

Usually auctions at hunting banquets are yawn-worthy.  The pace for the first thirteen auction items followed the standard scenario of nearly reaching the estimated value. Some excitement but no frenzy. Then From the Cape to Kasserine came on the block. What did the audience know about this book that would cause them to bid in such a radical departure from the standard?  Here’s what the auction program detailed: From the Cape to Kasserine was donated by Safari Press and Craig Boddington, was handmade from the skin of a water buffalo, had extensive gilt and debossing on its cover, and had a retail value of $975.*

Out of print Safari Press books are well known for garnering very high prices with collectors at auctions, but even these top out at $5,000 to $7,000 for the rarest.

As the donators of this book held their collective breath, From the Cape to Kasserine immediately surpassed its established retail value of $975.  The donators let out a sigh of relief, hoping against hope that the book would double its stated value.  It did that . . . and more.  Two thousand dollars, three thousand dollars, and suddenly, the auctioneer hurtled into double-digit figures.  Did someone actually bid, “Ten thousand dollars”?  Electricity surged through the room. Who would pay ten thousand dollars for a new book? The attendees strained to see who was bidding. 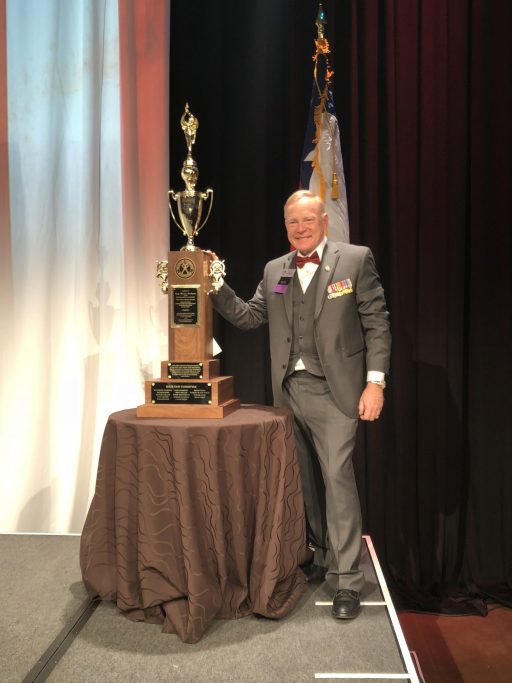 Craig Boddington with the Weatherby Trophy.

Then Alain Smith, the evening’s emcee, interrupted the frenzy to give an enthusiastic and detailed description of the book and to make an announcement. The tumult halted momentarily as he told the audience that Ludo Wurfbain, Safari Press’s publisher had asked the twelve living Weatherby Award winners in attendance that evening to sign the book.  Obviously that helped.

Usually auctions at hunting banquets are sedate affairs.  Not this auction.  Not for this book.  The crowd broke out in a thunderous applause amid calls of jubilation, joy, and encouragement, for the book was a 100-percent donation for the Weatherby Foundation. The money garnered in the auction that night will be used to educate American youth to the values of hunting and conservation.  A worthwhile enterprise to spring from a remarkable evening.

The editors of Safari Press believe this to be the highest price ever paid for an in-print hunting book.  A new world record.

Note: This is an extremely limited edition—just twenty-six, full-leather copies were made.  Handmade of dark brown buffalo hide, From the Cape to Kasserine features a debossed map of Africa on the front cover and two contrasting red leather stars that place Kasserine and the Cape on the map. Matte gilt lettering and artwork adorn the cover of the book. Inside the book are brown and red marbled French endpapers. The book is housed in clamshell box covered in high-quality wax-impregnated cloth and lined with the same brown and red marbled French endpapers found in the book.  It is limited to 26 lettered copies A-Z and it was copy W that sold during that evening.  This leather edition is now sold out.  The limited edition of 500 cloth-bound signed, numbered and slipcased copies is still available. Please click here for more information.