There are many great cartridges in its class, but Roy Weatherby’s flagship .300  remains one of Boddington’s favorites.

It’s probably not inappropriate that, sometimes these days, I feel old. That’s a natural and unavoidable progression, but I like it less when I feel that I’m becoming obsolete! Like, for instance, when I tell folks I’m shooting a .300 Weatherby Magnum and they look at me like I have at least three heads.

True enough, the case design is no longer “modern.” Based on the full-length .300 H&H case with body taper removed, the case length of 2.825 inches requires a .375 H&H-length action. It has Roy Weatherby’s distinctive double-radius shoulder which, to my knowledge has never been proven to have any real advantage. On the other hand, it also hasn’t been proven to do any harm. Like all Weatherby cartridges, the .300 has a belted case, which we all know to be just about as old-fashioned as me! Come to think of it, and if you really want to be old-fashioned, there are no flies on the parent cartridge, the .300 H&H . . . but it’s so uncommon today that I won’t try to make an argument for it.

Historically most of my .300 Weatherby Magnum rifles have had 26-inch tubes. Largely by accident, the .300 Weatherby Magnum barrel for my Blaser R8 is 24 inches. Although extremely accurate, it is not a fast barrel. Lately I’ve been shooting mostly 200-grain ELD-X. Actual velocity is 2,900 feet per second. I can almost get that from a .300 Winchester Magnum. 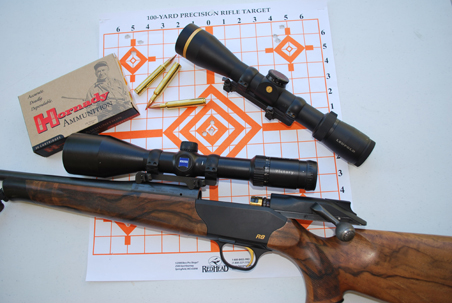 Groups with the .300 Weatherby Magnum barrel on the Blaser R8. At this time Boddington was shooting mostly 180-grain SST; he currently shoots mostly 200-grain ELD-X, similar accuracy but improved performance at longer ranges.

What about modern case designs? You bet, they’re out there. We have no shortage of fast .30-caliber cartridges. The .300 Remington Ultra Magnum (RUM) also requires a .375 H&H-length action. Based on the fatter unbelted .404 Jeffery case, the .300 RUM also needs a 26-inch barrel, but it has greater case capacity than the .300 Weatherby, so should be faster. But now it depends on who is doing the loading. Weatherby ammunition is loaded by Norma to slightly higher pressures than domestic manufacturers have been comfortable with. Also, one of Roy Weatherby’s specifications was a bit of unrifled free bore behind the rifling. Weatherby’s 200-grain factory load by Norma is rated at 3,060 fps. This is probably honest velocity in a 26-inch barrel with a Weatherby chamber, but difficult to duplicate. Remington’s 200-grain Swift A-Frame load for the .300 RUM is rated at 3,025 fps.

Obviously, these loads are considerably faster than what I’m getting from my 24-inch Blaser barrel. But do I care? Not a whole bunch! Barrels differ and so do loads, and game animals are unable to recognize the difference of a hundred fps. If I wanted faster I could upgrade to larger-cased cartridges like the .30-.378 Weatherby Magnum, which is a belted case. Or, to fatter unbelted cartridges like Lazzeroni’s 7.82 (.308) Warbird or the current darling of the sniper community, the .300 Norma Magnum. The Warbird and the .300 Norma are based on the extra-fat .416 Rigby case; the .30-.378 Weatherby case is a belted version of the .416 Rigby.

So, more velocity is out there, readily at hand. Or I could downgrade and go for modern efficiency with one of the short, fat, unbelted magnum .30s. There are at least four choices: .300 Ruger Compact Magnum (RCM), .300 Remington Short Action Ultra Magnum (RSAUM), .300 Winchester Short Magnum (WSM), and Lazzeroni’s fat and fast 7.82 (.308) Patriot, all sized to fit short (.308 Winchester-length) bolt actions. The RCM, RSAUM, and WSM run a bit behind the .300 Winchester Magnum, but no game animal will know the difference. Lazzeroni’s Patriot is faster, running close to the .300 Weatherby.

Hey, even though I’m old and boring, I’ve used most of the fast .30s: Long, short, fat, thin, belted and unbelted. As I’ve written many times, there isn’t much you can’t do with a fast .30-caliber. There are advantages and disadvantages, and differences in velocities, but all these cartridges are similar enough to fall into the same class of power and versatility. The fact is, I’m comfortablewith the .300 Weatherby Magnum. It is not my only fast .30, but it’s the fast .30 that I’ve used the most over the past 35 years. 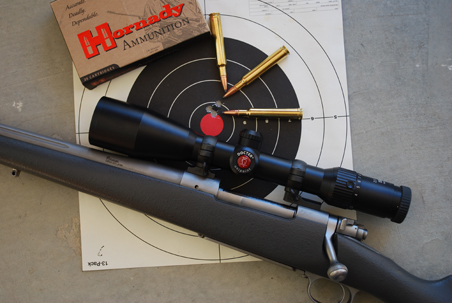 The .300 Weatherby is not renowned for extreme accuracy, but Boddington has found it plenty accurate enough. His Rifles, Inc. .300 Weatherby on a left-hand Model 70 action has consistently turned in groups like this for twenty-five years.

I would never tell anyone to get a .300 Weatherby Magnum instead of a .300 Winchester Magnum. Performance-wise the two are similar, and efficiency and availability should be considered. Excuse my idiosyncrasies, but I have a long history with the .300 Weatherby Magnum, and I still like it. I got my first one in 1982, a left-hand Mark V with 26-inch barrel. This was after devastating burglaries (yes, that’s plural!). For several years it was one of few rifles I owned, so I used it a lot and came to love it. It was followed by another left-hand Mark V, and in about 1990 Lex Webernick built me a .300 Weatherby Magnum on a stainless left-hand Model 70 action with 26-inch fluted barrel. This rifle remains a favorite, used on numerous hunts both here and in Asia. 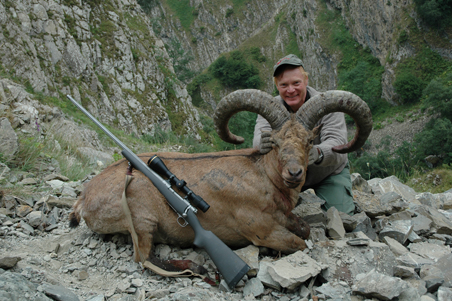 As I said, my 24-inch Blaser barrel in .300 Weatherby was “accidental.” Back story: In 2010, when the R8 model was new, I got one with a .300 Blaser Magnum barrel. It shot wonderfully, but Blaser decided not to market their unbelted Blaser Magnum cartridges in the U.S. This created an unnecessary complexity, so I traded that barrel for the .300 Weatherby barrel. It was a spur-of-the-moment decision; if I’d thought harder I might have insisted on a 26-inch barrel, or made it a .300 Winchester Magnum instead. Doesn’t matter–this barrel also shoots great, and I’ve never looked back.

It is often said that the .300 Weatherby is not particularly accurate. Other fast .30s with more modern case designs are theoretically capable of greater accuracy. However, I believe that quality of barrels plus bedding and rigidity of action are more important to accuracy than case design. I’m not saying I’ve had a .300 Weatherby Magnum that could win benchrest matches, but all of mine have been comfortably sub-MOA rifles. This has made them suitable for hunting non-dangerous game under virtually any conditions anywhere in the world. The same can be said of any accurate fast .30, regardless of case design or dimensions. The .300 Weatherby Magnum isn’t the only choice and may not be the best choice, but it’s a choice I have confidence in. Which is why, despite all arguments, I continue to use it.