A look at the various cartridge choices in the .416 class.

First, let’s answer the most critical question: Do you really need a cartridge of .416 (or similar) power? Honestly, probably not, but it depends on your hunting plans. The .375s are adequate for buffalo. However, the .416s and their ilk are more adequate for buffalo! The .375s are, in my opinion, very marginal for elephant. The .416s, however, are fully adequate. In fact, because of higher velocity and smaller frontal area a 400-grain bullet from a .416 or similar caliber will consistently penetrate better than a 500-grain bullet from a big bore between, say .450 and .475. The .416 class is also more versatile than a true big bore. So it depends on what you intend to hunt: The .375s are more versatile on smaller game; the .416s are more versatile on the upper end.

Of course, truly needing a rifle and wanting one aren’t the same. If you want a rifle in the power class of the .416s so be it…but now you have to make choices. As a class, what John Taylor (African Rifles and Cartridges) referred to as the “large medium bores” goes back to the turn of the previous century with the .450/.400, first in 3¼-inch case length and later in 3-inch; both are rimmed cartridges intended for double rifles and single shots. Based on the .450 case necked down, these cartridges propel 400-grain .41-caliber bullets at about 2,100 feet per second, yielding about 4,000 foot-pounds of energy. In 1909 William Jeffery introduced the .404 Jeffery, a 400-grain bullet of .423-inch diameter. Initial loadings essentially duplicated .450/.400 performance, but the rimless .404 case was designed for bolt-actions. In the same year Westley Richards introduced the .425 Westley Richards cartridge. Firing a 410-grain bullet of .435-inch diameter, the .425 produced 2350 feet per second, yielding just over 5,000 foot-pounds of energy. John Rigby countered in 1911 with his .416 Rigby. This cartridge has the largest case of the three and requires an extra-large “magnum” action; the initial (and traditional) loading is a 410-grain bullet at 2,370 feet per second, yielding 5,100 foot-pounds of energy. 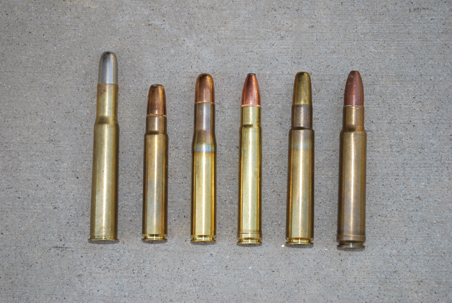 The .404 was by far the most common of the “large mediums,” although the .416 Rigby was probably the most famous. However, by the 1960s ammo was scarce for all of them; the cartridges were kept alive primarily by American handloaders, shooting Barnes’ original lead-core bullets. The .416 emerged as the most popular bullet diameter. Rigby cases could be made by turning the belts off of .460 Weatherby Magnum cases and necking them down, but actions large enough to house the .416 Rigby remained scarce and costly. So American handloaders created their own .416 cartridges. The .416 Taylor, based on the .458 Winchester Magnum necked down, was popular in the 1970s and almost made it into factory form. In the 1980s the .416 Hoffman, based on the .375 H&H case necked up, became a popular wildcat. My first .416 was a .416 Hoffman, built in 1985 by Barnes Bullets’ Randy Brooks. I used that .416 Hoffman for buffalo and my first elephant, and performance was awesome—but, clearly, wildcat cartridges aren’t for everyone, so through the 1980s the large mediums were uncommon.

The world changed in 1988. Late that year Remington introduced the .416 Remington Magnum. It is very similar to the Hoffman, except that Remington necked up their own 8mm Remington Magnum case instead of the .375 H&H case. A few months later Federal added the .416 Rigby (and .470 Nitro Express) to their Premium line, and at about the same time Weatherby introduced the .416 Weatherby Magnum, based on the belted .460 case necked down. Now, suddenly, we had three factory-available .416 cartridges to choose from. There are others, both proprietary and wildcat, but these three—.416 Remington, Rigby, and Weatherby Magnum—have remained the primary choices, joined in 2008 by the shorter-cased .416 Ruger, based on the .375 Ruger case necked up. Krieghoff also introduced the .500/.416, a 3.25-inch rimmed case producing a bit less velocity than the Remington or Rigby.

The old .404 Jeffery never quite died away; though uncommon in the U.S. it was always loaded in Europe. In recent years it has made quite a comeback; .404 Jeffery ammo is now available from multiple sources, and modern loadings are faster than the original, generally propelling a 400-grain bullet over 2300 feet per second, yielding at least 4,500 foot-pounds. The .450/.400s are also available again, with Hornady’s .450/.400-3-inch load the most common large medium in new doubles. 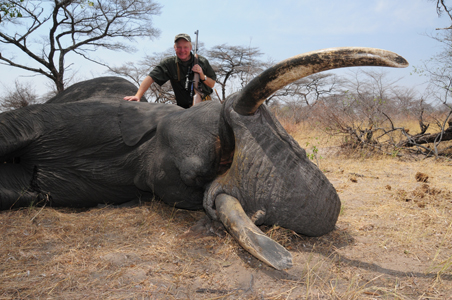 Boddington used a scoped .416 Rigby on a double-square-bridge Mauser action to take this excellent Caprivi bull. Regardless of which cartridge, the various .416s with 400-grain solids generally offer better penetration than true big bores in the .450 to .475 class.

So, which to choose? Well, if you want raw power, that’s pretty easy. The .416 Weatherby Magnum is by far the fastest, a 400-grain bullet loaded to the gills at 2,700 feet per second, yielding nearly 6500 foot-pounds of energy. Two things: A full-up magnum action is needed to house it, and although the high velocity gives it about the same trajectory as a .30-06 with 180-grain bullets recoil is punishing.

Now, with all the rest, excepting the mild .450/.400, performance is so similar that there isn’t much to argue about. The .404 Jeffery, .500/.416, and .416 Ruger are a bit slower than the .416 Rigby and .416 Remington—but close enough that no game animal is likely to notice the difference. Most available in far-flung corners of Africa are probably the .416 Rigby, .416 Remington, and .404 Jeffery. The least costly rifles (and ammunition) are probably the .416 Ruger in Ruger’s Model 77 Hawkeye; and the .416 Remington Magnum, available in multiple factory rifles. The .416 Rigby still requires an extra-large action, so rifles are costlier. The .404 Jeffery can be crammed (barely) into a .375 H&H-length action, but it’s a standard chambering only in CZ’s sturdy Mauser.

If you have a yen for a double rifle or a big single shot I think there are just two choices, the .450/.400 or .500/.416. This is because these two alone have rimmed cases. Double rifles really need the rim for extractors or ejectors to get a good bite. This applies to most single-shots as well, although the ejector on the Ruger No. 1 is pretty foolproof. I personally prefer the .450/.400 3-inch because recoil is so mild. We have taken several elephants with this cartridge, but although more effective than a .375 I think it’s marginal for elephant—but it’s just plain perfect for buffalo! The .500/.416 has a lot more recoil, but clearly it’s a more powerful cartridge, the double rifle equivalent of any other .416. Ruger has chambered the No. 1 in .450/.400 3-inch, but the action isn’t quite large enough to house the .500/.416. 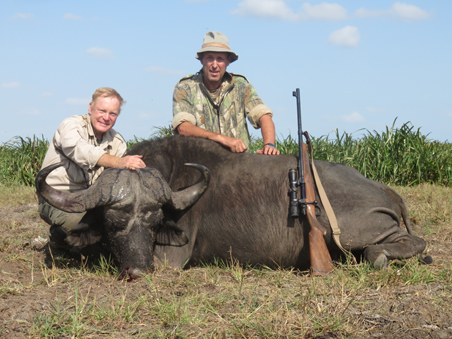 Boddington and PH Mark Haldane with a good Mozambique buffalo, taken with a single 400-grain softpoint from a Rigby Big Game Rifle in .416 Rigby. A scoped .416 isn’t quite as versatile as a scoped .375, but offers much more capability on larger game.

In bolt-actions the world is your oyster. The most traditional choice is the .416 Rigby, truly a marvelous cartridge. However, cost is higher and the rifles will be heavier. Combining all factors, I tend to think the .416 Remington Magnum is a fine choice. There is a rumor out there that .416 Remington ammo is loaded a bit too hot and can produce sticky extraction in African heat. It is absolutely true that the .416 Rigby, with its extra-large case, operates at lower pressure. However, I have tried to run this rumor to ground and I have not yet found a verified problem. Ballistically, the .416 Remington Magnum and the .416 Rigby are equal, most commonly loaded today with a 400-grain bullet at 2400 feet per second. The Remington will usually be a cheaper and lighter rifle, and ammunition is at least equally available. The little .416 Ruger will be an even lighter rifle—but Hornady is the single source for ammo.

So, for romance and nostalgia, the .416 Rigby is the one…but practical considerations lean toward the .416 Remington. I’ve taken large game with all the common .416s, as well as multiple wildcats and proprietaries but, perhaps oddly, I don’t actually own a .416 right now. Instead, I have a .404 Jeffery! Which, if you just want something a bit different, is another wonderful choice. Campfire arguments about which is best will go on forever, but no buffalo, elephant, hippo, or rhino is likely to know the difference.