You follow for as long as you can . . . and then you keep going.

Last summer, hunting in South Africa with Diekie Muller, I made a terrible shot on a buffalo. I was using a big handgun, a .460 S&W. It’s plenty of gun if I’d made a good shot, and a bad shot is always the shooter’s fault. The presentation was perfectly broadside. I was steady on sticks at less than 60 yards, with an Aimpoint on the big revolver. All was perfect…except the buffalo turned away as I finished the trigger squeeze. It was too late to call back the shot, and I knew I’d hit a bit far back.

That was about 9 a.m. There wasn’t much blood and it was slow going, but we tracked him until dark, jumping him two or three times in stuff too thick for a shot. The next morning, we started again. Now there was almost no blood, but we had to assume the bull had stayed in some thick riverine bush, so I stayed with the trackers, painstakingly working our way, while Diekie looped ahead of us. It was noon, another five hours on the trail, and Diekie was just out of sight beyond some thick, dark thorn. We heard one snort, then the boom of Diekie’s Krieghoff .470…slight pause, then the second barrel. Diekie was still standing, reloaded; the buffalo was down at his feet. I paced six steps from the buffalo’s nose to Diekie Muller’s shoelaces. 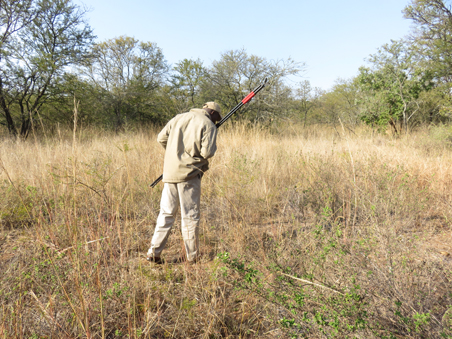 A tracker searches for blood. The great African trackers have two great attributes that we can all learn from: Uncanny powers of observation, plus patience. A third, almost impossible to learn without great experience, is a sixth sense of where the animal might go.

On the next-to-last evening of our 2017 Kansas rifle season my buddy Derek Barnes hit a buck, exactly the kind of buck he looks for, mature but with funky antlers. I was on a stand not far away, so I came to him and we took a look. He was shooting a 7×57 and felt good about the shot, but the deer had been in shadowed timber. His buck had run, then stood and there was plenty of blood. We took the trail, but less than an hour later, with light fading, we were down to just a drop every few yards. Not good, and in our heavy oak leaves any disturbance can quickly erase what trail there is. We flagged the trail and called it until morning.

Going slowly, we managed to follow the trail off neighbor Chuck Herbel’s place, across the road to my place, and along the ridge. At about a mile and three-quarters we lost the blood completely, but the direction had been pretty straight, and headed toward a creek at the bottom of the ridge. Chances were good he headed for water, so we kept going, following faint disturbances in the carpet of leaves. I found one more spot of blood a couple hundred yards above the creek, and just perhaps some scuffing where an animal had headed downhill. We separated, looking into every thick patch, and eventually reached the creek. Derek was off to my left; I took a few steps, looked into a patch of weeds along the creek, and called out, “Derek, here’s your buck.”

Just after Dallas Safari Club I went to Sonora on a Coues deer hunt with Mossberg’s Linda Powell and a couple other writer/friends. Three of us got nice bucks quite easily, no drama, but just before dark on the fourth evening our last hunter shot a monstrous buck at about 300 yards. It was dark by the time they got over there, so they wisely waited until morning, and then we went up there with me, all the guides, and cowboys on horses.

At dusk things had looked really good. The buck jumped high at the shot and hurtled downhill, and they’d found blood immediately at the hit site. In stark morning light things didn’t look so good. Guide Ron Shelton had found and flagged blood at the hit site…but there wasn’t much more, just enough to get a downhill angle. Honestly, this didn’t mean that’s all there was; the crumbling granite with sparse vegetation is horrible for tracking. But we couldn’t find any more. Working downhill and sidehill, and back uphill to do it again, eight of us searched all day and never found another trace. The next morning, our last, all the guides surrounded the mountain and glassed until their eyes fell out. No further trace. 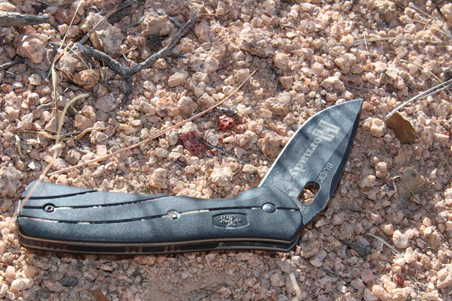 At the hit of a Coues whitetail just a few drops of blood were found…and not much more. With very little sign it proved impossible to determine where the animal might have been hit, and, ultimately, exactly which direction it went. Two days of searching yielded nothing, and now the hope is for birds or coyotes to tell the tale.

In the first instance, on that buffalo, I was horribly embarrassed because I made a bad shot. And, since it was a buffalo and not a buck, I was deeply relieved that nobody got hurt. In the second instance I just happy we found Derek’s buck. I’d be the first to say there was some luck involved, but it is home turf and we’ve trailed deer there before. Usually we—or one of the neighbors—eventually find them along a creek.

In the last instance, well, that’s a tragedy. We didn’t have enough to go on, not even enough to have a clear idea of where the buck might have been hit. That one, by the way, is not over. At this writing three weeks of the season remains. This was a distinctive buck with a tall frame, and the rut is in full swing. If he’s hale and hearty somebody will glass him chasing a doe…and if he’s not birds will lead the cowboys to him.

It’s still a regrettable tragedy, but the reality is that, even with the right equipment, careful preparation, and the best of intentions shots are not always perfect. Even if you’re not certain of a hit ethics require an exhaustive search. Once one drop of blood is found any and all effort must be expended to recover the animal. I personally like the African ethic that “one drop of blood equals an animal taken.” It makes one more careful with the shot! Sometimes, however, tracking is necessary. Bowhunters tend to be pretty good at this because even perfect hits often require trailing. African trackers are legendary, and most guides are pretty good at it because they’ve had practice. But we all need to be as good at it as we can be, and exhaustive in our search.

The most important thing, I think, is patience. Derek’s buck was hit just slightly back and low, hardly two inches from perfect…but that buck took us two miles. So, a primary ingredient is patience. Good bowhunters like to wait at least a full hour before taking a track. This is a good idea unless you’re reasonably certain of the hit. The first step is to mark carefully and precisely where the animal was standing when the shot was taken. There often won’t be a single drop of blood for thirty or forty yards, but you can usually find running tracks where the animal took off.

After maybe a hundred and fifty yards the assumption should be made that the hit wasn’t mortal, at least not immediately. The blood will give often give clues: Bright pink lung blood, good news; very red muscle blood, maybe okay, maybe not; dark blood with stomach matter, bad news. Don’t look just at the ground; you need to examine grass and leaves for the faintest smears and splashes. Remember exactly how the animal was standing and try to get a feel for where the animal might have been hit. Things are not always as they seem!

Mornings are wonderful because you have all day and can take your time. Last-light hits are problematic. If you push the animal in the dark you may mess things up badly, so unless a really good hit is reasonably certain I prefer to back off and wait for good light. This means a long, sleepless, and worrisome night…but if it was your or my errant shot we deserve that. Aside from risk of pushing the animal ahead of you, there’s also a risk of erasing the trail while bumbling around in the dark. On the other hand, leaving it until morning runs the risk of predators intervening. That makes this a tough call, but it depends on the sign, and also terrain and cover.

Because they are so often shot late this is a common decision with leopards…and hyenas are a serious risk. Most PHs will give it a couple hundred yards in the dark, and then wait until morning. The only guy I knew who preferred to follow wounded cats at night was the late Ian Gibson. He believed his chances of avoiding a charge were better at night because the lights would pick up the eyes. Maybe…but I’ll pass on wounded cats in the dark! 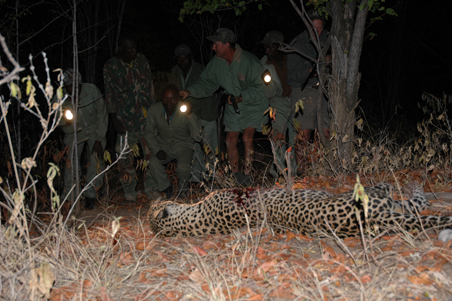 Due to presence of hyenas most PHs will trail cats up to a couple hundred yards in the dark, but then a wounded animal must be declared and the track resumed in daylight. This leopard was found dead within a hundred yards, a happy conclusion after a few scary minutes.

Perhaps the hardest part is deciding when to quit, that all traces and all hope are gone. Regrettably, this happens. It’s a decision that must not be made lightly, only after all routes and all possibilities have been thoroughly examined. If you’re alone some serious soul-searching is required: Have you truly done all you can? If in a group, it needs to be a consensus decision. Is everyone certain that all that can be done has been done? If so it’s something you must live with, but if you’re a real hunter, it will haunt you for a long time.