We were just outside of Etosha National Park, in rolling country with the sun just starting to drop over low hills to the west. Namibia’s normally perfect July sky was, well, overcast, carrying a hint of rain so unseasonal as to be almost impossible, but as the sun dipped through scattered clouds the sunset was fantastic.

In position with a small waterhole in front of us, Brian Roodt and I watched the sun dip lower and we waited and looked at each other. A few of the big African doves with black neck-flashes zoomed past, but there was no whistling of the sand grouse we awaited. More ominous, we saw none staging on the horizon. Brian is a good young outfitter in a business that needs good young outfitters, and this was a favorite spot for sand grouse. We’d driven like mad over dusty roads and opened umpteen gates, timing our arrival so we’d catch the sunset flight. But the sand grouse were a no-show. We shot a few doves, but as the falling sun touched the horizon they were roost-bound and finished for the day. Visibly deflated, shoulders slumped, Brian and I got ready to head back to the truck. It was a bust.

Twelve minutes past sundown, we heard the high-pitched whistling as the first flight came in, catching us totally unready. They came screaming in, twos and threes and sixes and a dozen. Dusk caught us too soon, but by then our barrels were hot and it was time to use the remaining light to collect our birds. 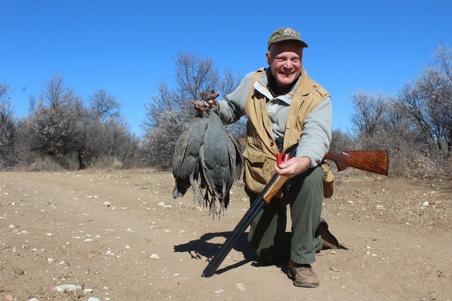 A few helmeted guinea fowl for the pot. Most guinea fowl are taken in quick chance encounters. With planning and plenty of help it’s possible to drive them, especially in agricultural areas, and that can be fantastic shooting.

The sand grouse is not a grouse at all—it looks more like a shorebird with grouse-like barred feathering and a plump and tasty breast. A semi-desert bird, the sand grouse is widespread in Africa. In Namibia the double-banded or Burchell’s sand grouse tend to come to water just at sunset, while the Namaqua sand grouse fly at mid-morning. Normally you can set your watch by them; we could only speculate that the cloudy skies put them off their schedule. The flights don’t last long; in the evening it’s fast and furious for just a half-hour; in the morning the flights might last an hour.

Robert Ruark was a shotgunner long before he touched a rifle; from Horn of the Hunter onward, his accounts of big game are always spiced with bird shooting. I think sand grouse offer Africa’s most classic bird shooting, at least in part because I know of no feathered game as difficult to hit. They’re faster than doves and more acrobatic, twisting and diving as they approach the waterhole, whistling bravely through shot and shell. The sand grouse, however, is just a small part of Africa’s rich shotgunning.

It depends on where you are and hatches vary from year to year. However, in the midst of her big game, most of Africa has good bird shooting, but few visiting hunters take advantage of the opportunity. I’m as guilty as most, but over the years I’ve done a fair amount of African wingshooting and it’s always wonderful.

I think most hunters do at least some bird shooting at home, and some serious shotgunners hunt feathered game almost exclusively. Either way, as you plan your African safari(s) I think this is something you should ask prospective outfitters about. Game birds of some type will almost always be present, sometimes in profusion. In order to take advantage of it, there are two considerations: Shotguns and shells. Whether you should take your own shotgun depends on how avid you are. We all shoot better with our own shotguns, but most professional hunters keep a shotgun around. It may a short-barreled gun for snakes, wildly unsuitable for birds, or it may be a more versatile setup used for pygmy antelopes in thick cover. A few years ago Johan Calitz uncased a pair of Westley Richards 20-bores for an impromptu driven francolin shoot. Shotguns of that quality are unusual in any hunting camp, and in Africa anything other than 12-gauge is uncommon. But you never know until you ask.

I’ve taken shotguns before; this year, planning some serious bird shooting, I took a Caesar Guerini sporting clays gun to Namibia. However, I also had a .270 for plains game and a double .450 for buffalo. When picking and packing guns for Africa, “two’s company and three’s a crowd.” Three guns, though possible, makes the gun case too heavy, plus three is a lot to look after. 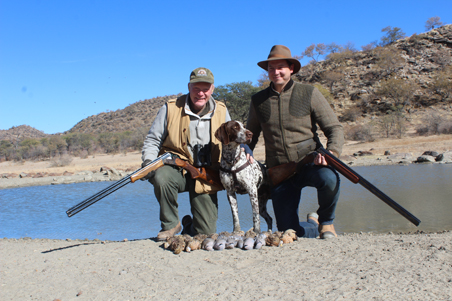 Boddington and Hanns-Louis Lamprecht and a good shorthair after a quick morning’s flight of Namaqua sand grouse. The morning flight isn’t as hectic as evening, normally starting about 9 a.m. and lasting perhaps an hour.

If you take a shotgun, think about mating it with just one rifle. On plains game hunts, two rifles aren’t essential; just pick one very versatile rifle based on the largest game you intend to hunt. If a buffalo is on the menu, a good old .375 will handle everything just fine (as always). Obviously I didn’t do that this year, and I hated myself every time I had to lug the gun case. In my defense, I bummed around Namibia for nearly a month but, predictably, the only time I used the .450 was for buffalo. The shotgun, however, saw quite a bit of use. I had several excellent sand grouse and dove shoots, and chased guinea fowl and francolin here and there. Taking your own shotgun is a personal decision, as is choosing your rifle(s).

What about shells? Standard baggage allocation remains five kilograms or eleven pounds. Last year we took Donna’s Krieghoff 20-gauge to Mozambique and fit in three ten-packs of No. 5 turkey loads, plenty for suni and blue duiker and a few guinea fowl for the pot. You might manage a couple boxes of 12-gauge loads along with your rifle ammo, but you cannot carry enough for serious bird shooting. So, along with available shotguns, you need to discuss shotgun shells with your outfitter. Supplies vary widely across Africa, from scarce and precious to readily sourced, but if you want to do serious wingshooting, especially high-volume shooting like doves and sand grouse, your outfitter must lay in a supply. South Africa is not a problem, and now Namibia isn’t, either. After investing nearly five years in getting all the permits, my old friend Hanns-Louis Lamprecht is now manufacturing shotshells, the first commercial ammunition ever loaded in the country of Namibia. 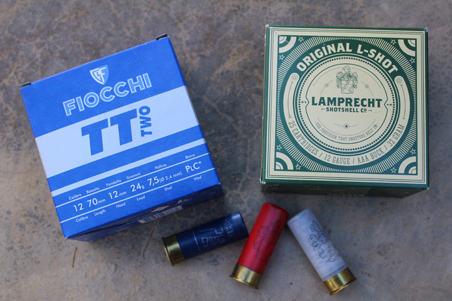 Adequate supplies of shotshells are a problem in much of Africa. In Namibia, Hanns-Louis Lamprecht is now loading hunting ammo under his Lamprecht brand, and Fiocchi target loads under license. This is the first factory ammunition of any type ever manufactured in Namibia.

Initial offerings include game loads under his Lamprecht brand, and he’s also making Fiocchi target loads under license. A major reason I lugged a shotgun was to try out his ammo, and I was impressed. His shells are clean-burning and hard hitting, and when I did my part birds fell. However, with sand grouse, nobody bats a thousand!
On another evening with Brian Roodt there was a band of dark bush just beyond the waterhole. Just as the birds dipped down, that dark bush was behind them, so every time I thought I had the lead just right they vanished utterly. It was embarrassing, but that’s part of sand grouse shooting. Morning shoots usually aren’t as furious, and good light helps. One morning Hanns-Louis and I had about three-quarters of an hour of steady shooting. We picked up eighteen birds for forty shells, almost filling our ten-bird limits. I’m not sure I can do much better than that!