Hunting chamois (pronounced shammy or shamwah) is a traditional European pastime. These 55- to 130-pound mountain dwellers have been familiar prey and welcome dinner guests for thousands of years. From peasants and herders to kings and queens, hunters have launched expeditions to slay the hearty, elusuve mountain chamois. Many of our oldest hunting traditions and earliest conservation restrictions evolved through management of these unique animals. Even firearms—those trim, light, elegant European single-shots—were inspired by chamois. Climbing the hills, mountains, and rocky ridges of Europe and the Middle East in search of chamois in montane, sub-alpine, and alpine habitats is as classic a hunt as Europe offers.

Thanks to hunters, the agile, sprightly, rock hopping chamois now roam the mountains of New Zealand, too. Homesick hunters introduced them to that far southern island way back in 1907. With no predators aside from humans, chamois have since pioneered nearly all suitable habitats on the beautiful, mountainous South Island. While environmental purists wish to exterminate them, sportsmen are fighting to maintain them at tolerable levels. After all, domestic sheep and humans are invasive species, too, doing far more ecological damage than chamois. No one’s proposing eliminating them.

In Europe, chamois live in suitably rugged terrain as high as 11,000 feet from northwest Spain east to the Caucasus, south to Greece and Turkey and north as far as Czech Republic. Many populations are isolated in small mountain ranges, leading to a confusion of quasi sub-species. Pursuing all of the varieties is a great way to explore the mountain ranges of Europe. 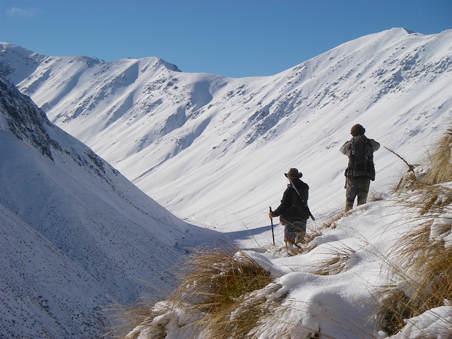 Hunting the different varieties of chamois is a great way to explore the mountain ranges of Europe and New Zealand.

While a member in good standing of the Bovid family and Caprinae subfamily, the chamois is not a true goat or sheep. It is a member of the genus Rupicapra, species rupicapra. Like the similarly unique North American mountain goat, chamois males (I’ve heard them called rams, bucks, billies, and even bulls) do NOT bash horns in the manner of sheep and true goats. They mostly posture and chase. If they do clash, it’s more about pushing, shoving, and hooking/raking the opponent’s body than butting heads. Relatively delicate chamois horns are not engineered for high impact clashing, but evisceration from those wickedly sharp, hooked horns seems a distinct possibility.

Sizes are variable, but most chamois stand 26 to 32 inches at the withers and stretch 40 to 55 inches from nose to stubby tail. An erect neck atop a fairly sturdy, long-legged trunk gives the chamois a lively, alert look. Pelage varies by subspecies and location from tan and brown to chocolate, turning nearly black in winter, especially in males. A white nose blaze extends up between black, hooked horns in both sexes. The lower jaw and throat are white, leaving a dark band of short fur from nose tip through the eyes to the ears. Inner ears usually white, rump often white. Horns are usually heavier and longer in the males, reaching as many as 14 inches around the outside curve with ten inches representing a good to great trophy. Males also have a leathery scent pad/gland at the rear base of each horn that swells during the rut and could be significant for scent marking, establishing dominance or identity, or signaling females about virility and the physiological condition of the ram.

Despite the vertical terrain it favors, chamois are great runners able to reach speeds of a reported 31 mph even over rough, tilted landscapes. Watching them dash steeply downhill over broken terrain is enough to put your heart in your throat. They can leap more than six feet straight up. Like most mountain bovids, chamois maintain their footing with hooves that include a leathery, somewhat spongy inner surface mated to hard hoof edges.

Females and young herd in small bands which otherwise solitary males visit during the brief fall mating season running October through December. Hunts are conducted then, but also across a wide span of months from June to February depending on the country and its traditions. If there can be said to be a chamois stronghold, the Alps of France, Switzerland, Austria, and Italy are it. Turkey has Anatolian chamois across an extensive range. Caucasian chamois are estimated to number around 15,000.

Romania boasts the largest subspecies, the Carpathian chamois, which has the largest horns of all chamois on average. This is definitely the destination for the big ones.

Because of its small size and modest horns, the chamois doesn’t draw hunters’ attention quite as readily as an argali, kudu, or Cape buffalo. But climbing mountains in the shadows of ancient Greeks, Carpathians, Romans, and Goths lends enough mystique to the adventure for most hunters.

Heraldric Representation: Chamois imagery has been found on more than 50 heralds and coats of arms.

The long, black nape and back ridge hairs of chamois are often worn on Tyrolean hats as accents called gamsbarts.

Like many mountain animals, chamois seek security in cliffs and rugged terrain from which they habitually watch for danger from below. Stalking from above gives hunters some advantage.

Chamois horns can be aged by counting annual growth rings.