The classic way to shoot a Cape buffalo is up close with a double rifle, but that’s not always possible.

As the herd moved closer, our little tree seemed to offer less cover. At thirty yards the group split; we had buffalo passing to the right at twenty yards, and another bunch coming straight toward us on the left. The breeze was strong on my face, quartering slightly from right to left. The buffalo to the right were good, and for the moment we were OK on the left, but as they strung past they would eventually catch our wind. We needed to make a decision before that happened.

I was hunting in Namibia’s Caprivi Strip (now officially known as the Zambezi Region) with Dawid Muller. In arid Namibia, buffalo habitat is limited to the well-watered Caprivi and a few other spots in the north. This means buffalo permits are limited, but with little hunting and good genetics, horn quality is very good. Muller’s Daggaboy Safaris, with his concession sandwiched between two parks, has one of the larger quotas. Because of small supply (and plenty of demand), Namibian buffalo are a bit pricier than some other areas.

On the other hand, Namibia has an unusual system. The northern areas are conservancies, pooled tribal and private lands. In addition to trophy permits for both buffalo and elephant, there is an “own use” quota. This is not the same as “non-trophy” permits or “PAC” (Problem Animal Control), both of which have been experimented with (and sometimes abused) in other countries. “Own use” means the meat must be recovered and distributed, and nothing is exportable. The intent, however, is to take animals with worn or broken horns (or tusks), or animals unlikely to grow them.

So, in 2018, I had an “own use” buffalo permit. And I knew that, hunting in Dawid’s area with his team, we’d get close to buffalo. Right now we seemed to be plenty close, but soon the leaders on the left were sure to get our scent. Several young bulls with good horns had passed. The hope was some older bulls might be trailing the herd, but we were running out of time. Then, with buffalo on both sides almost close enough to touch, we saw him coming. He wasn’t an old bull, but he was mature, with narrow, ugly horns. I stepped into the clear with my double .450; the shot was about ten yards.

As buffalo exploded everywhere, this bull shrugged off the 480-grain bullet with almost no reaction and tried to run with the herd. He lagged behind in just a few dozen yards; as soon as he was clear I shot again, and he went down with no incident.

Few things are more exciting than getting really close to buffalo like that. This is the romantic concept of buffalo hunting that we all dream of, up close and personal with a big-bore rifle. The only thing is, it’s a difficult thing to orchestrate, a matter of time and place and luck. Time: We had it right, with the herd drifting slowly past, but in seconds the front of the herd was sure to get our scent and there would have been no shot at all. Place: Where buffalo occur in Namibia, they’re fairly plentiful. Muller’s area adjoins Botswana, with big herds coming and going. With a limited quota, the buffalo receive little pressure and, while lions are present, they are not plentiful. So these buffalo are fairly calm.

The calmer the buffalo, the closer you can get, but even under the best of circumstances it takes some luck to get a very close shot. The more buffalo in a group, the harder it is to get close! Terrain and vegetation obviously make a huge difference. Much of Muller’s area looks like a sea of grass, and in fact all low areas remain flooded long after the rains. Even so, there are lots of little folds and hummocks hidden in the grass, and quite a few termite mounds, plus the occasional tree and small patches of brush. In my limited experience there, it is possible to get reasonably close without crawling. You still need luck with the wind and the fortuitous location of those scattered trees and clumps of bush.

An experienced hunting team is also a factor. A couple of years earlier, the first time I hunted with Dawid Muller, I had a regular permit. We got onto three bachelor bulls, much easier to close with than a mixed herd. Although the sea of grass looks the same to you and me, apparently the buffalo often graze in consistent patterns, flowing along almost invisible channels. Minding the wind, we made a big circle—walking, never crawling—and came in behind a little patch of thorn. We stood for a few minutes, and then the three bulls appeared in our laps. I shot the best bull at about twenty-five yards. That time I used a Krieghoff double .500 with open sights. 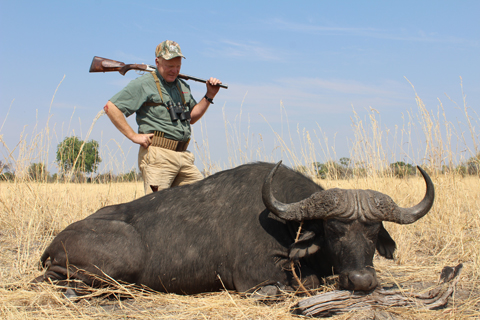 Boddington’s first Namibian buffalo, hunting with PH Dawid Muller, was taken at about twenty-five yards in seemingly open country. He used a Krieghoff double in .500 3-inch, one shot and down.

It was truly a classic encounter, and although I’m getting sketchy with open sights, I can still handle a shot like that. Over the years I’ve been that close to buffalo many times, but it isn’t easy. In 2018 I carried a Sabatti double in .450 3¼-inch, but, thinking that close shot might have been a fluke, I hedged my bet with an Aimpoint Micro H-2 sight. Of course, at ten yards I could have made the shot without optics–but how do you know?

I have much more experience with buffalo in the Zambezi Valley and in coastal Mozambique. The Valley is difficult to characterize. The bush is uniformly thick and there are plenty of lions and quite a bit of hunting pressure. Getting within twenty-five yards of a buffalo is difficult and unusual, but I’ve seen many shooting opportunities within fifty or sixty yards. On the other hand, there are scattered openings, broad sand rivers, and some significant ridges and ravines. It depends on where you catch your buffalo, but hundred-yard shots are not uncommon.

There was a time (not so long ago) when I could reliably shoot that far with open sights. Many can’t, and today I can’t resolve them well enough. True, most PHs use open sights, but their job isn’t to shoot the buffalo; it’s to stop it. As Zim PH Andrew Dawson said years ago, it’s perfectly OK to use iron sights if you wish–just understand you’re giving up 60 percent of your shooting opportunities. Sometimes you just can’t get as close as you’d like.

Coastal Mozambique is a different story. The majority of the buffalo are in the swamps and floodplains in and around the Marromeu Reserve. This country is dead-flat. Papyrus channels and sawgrass flats are interspersed with broad short-grass savannas. Strands of papyrus and fingers of sawgrass offer marvelous cover for stalking, but the buffalo like to graze and bed on the savannas. There are almost no lions out in the swamp and, with over 25,000 buffalo, the harvest is insignificant. These are the calmest buffalo I have ever hunted. However, you can’t just walk up to them, and most of the hunting is in big herds, lots of eyes and ears. Crawling is usually required, and everyone carries gloves and kneepads. This is fun buffalo hunting, but the downside is the shots are, on average, the longest I’ve seen. In a dozen straight years of hunting these swamp buffalo I’ve seen few shots at less than fifty yards. The average is probably ninety to one hundred yards, still possible with open sights, but there are situations where it is essential to reach out beyond a hundred yards. This is no longer open-sight territory! I love the red-dot sights and often use an Aimpoint. However, in coastal Mozambique, you are almost always sorting your way through big herds. Picking out the bulls is difficult—and then you and your PH must pick out the right bull. You will use your binocular, and a low-power riflescope is probably the best choice.

Of course, you can always pass on a shot and wait for a close encounter. That depends on how big the bull, how much time you have and, realistically, how hot and tired you are after crawling hundreds of yards in the hot sun with no shade for many miles. It is a marvelous experience to have a close-range encounter with a buffalo and take him down with a classic iron-sighted big bore. Just understand this won’t happen all the time. Regardless of where you’re hunting, you will take more and bigger buffalo bulls with optical sights, and, overall, kill them more cleanly.