Photo above: The Peter Rous kudu, one of the “long lost” trophies featured in the new record book.

The 30th edition of the Rowland Ward Records of Big Game (Africa) is in full production and will be available this fall. The Rowland Ward staff in Huntington Beach, California, spent two and a half years converting the database software to a new system and entering additional data from old scanned and paper archives. Additionally, the editors gained access to two significant old archives, one in the U.S. and the other in the United Kingdom, which yielded a great deal of the old Rowland Ward Ltd. paperwork from when the company was based in the heart of London, at 166 Piccadilly, prior to the 1970s.

The newly discovered archives included old albums, measurements, articles, photos, notes, and more. Some of this was collected by James Rowland Ward, the company founder. Many interesting photos and a great deal of data were unearthed, all of which will be featured in the new edition. In total, the Africa volume of Rowland Ward’s Records of Big Game now lists in excess of 40,000 records dating back to 1840.

Besides this work, the editors have received more than half a dozen new world records since the last edition (2014), including Damara dik-dik, common nyala, waterbuck, island sitatunga, mountain nyala, and southern impala, as well as the new No. 3 Nile buffalo. This is in addition to dozens of new top-10 records. Several new elephants were entered with tusks in excess of 130 pounds per side; while these were not shot in recent times, they had never before been recorded. Also newly recorded is a lesser kudu of more than 33 inches shot in Tanzania. 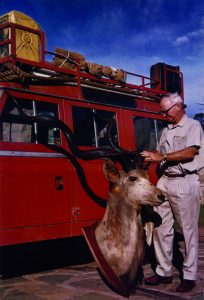 This photo of a Southern greater kudu taken by Peter Rous was long thought to be lost.

Of great interest is the recovery of several long-lost photos of very large heads from the past: four elephants over 150 pounds per side; a mountain nyala with 44-plus inch horns; and the much-debated James C. Rous kudu, which was shot in 1916 but amazingly photographed, with the hunter and the mounted head, after World War II.

The new edition will feature a new ranking method for the three larger buffalo varieties in Africa (Cape, Nile, and Central African) by adding together the sum of the two bosses and the spread. As before, the two smaller varieties of buffalo, dwarf forest and Western, will be ranked on horn length and boss measurements.
The editors take particular pride in the new maps featured in this edition. A total of about 100 were created; they feature current game distributions on the continent of Africa in great detail and full color. 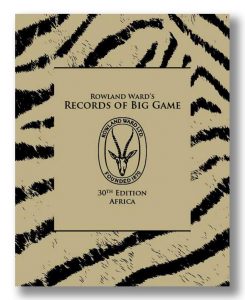 The new edition will be issued in a limited edition of 150 leather-bound copies that are signed and numbered by the editors, as well as a linen-wax-impregnated cloth-bound edition. The leather edition will sell for $375 but can be preordered before August 1 for $350. The cloth-bound edition is $125 but can be preordered for $100 before August 1. Order yours from the Safari Press web site, safaripress.com. 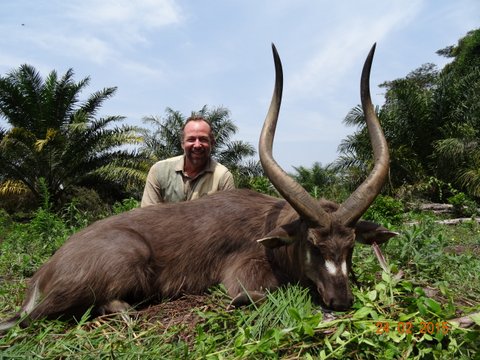