A long-lost sheep head may be the real world record.

In 2018, a new world-record bighorn sheep was announced. The large head was found in the fall of 2016 on Wild Horse Island, in Flathead Lake, Montana.  Apparently it died of natural causes at approximately nine years old, which is not really old as far as bighorns go.  The massive head got a lot of attention on the internet and at hunting shows this past winter, and reportedly weighed 50 pounds with a clean and dried complete upper skull.  Few Asian argali sheep have horns that weigh more than this, albeit some Altai argali will surpass this mark.  The Flathead ram is a remarkable testament to North America’s excellent game management.

The head scored a total of 217 2/8 gross B&C points (before deductions) and it beats by 7 6/8 inches a 14-year-old Alberta ram scoring 209 4/8, which was killed by a car.  Typically world records of sheep and goats only surpass the last record by an inch or two, so an increase of 7-plus inches seems almost incredible. But as we shall see, this is not necessarily an isolated incident. 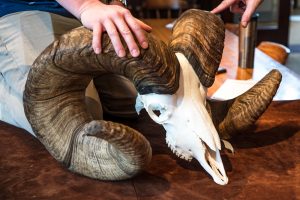 Is the Flathead ram really the biggest bighorn ever recorded?  Possibly not.  In the late1890s, a fur dealer form Tacoma, Washington, by the name of William F. Sheard publicized a ram that likely would surpass the Flathead ram by a significant amount.  Sheard was a collector of trophies and he bought the head from a Canadian.  Sheard said the head had been examined by a representative of Rowland Ward Ltd., and in 1899 the head was duly recorded in the third edition of Rowland Ward’s Records of Big Game. Sheard thought the head was killed in the Selkirks of British Columbia in 1885, but because he did not communicate with the man who shot the sheep, the location and date were likely not correct. At the time he offered the then-phenomenal amount of $500 to anybody who could present him with a head bigger than the Tacoma ram.

By 1900, several articles had been published in the sporting press with clear photos of the head, and it caused a sensation.  Well-known British hunter William Baillie-Grohman devoted a significant section of his book Fifteen Years Sport and Life(London, 1900) to this sheep.  Grohman spent years traveling the Canadian and American West in search of adventure and big game.  He was very familiar with the habits, distribution and many of the top trophies of early American game animals and wrote a 403-page book about it, replete with maps and pictures.  Grohman knew the actual hunter of the sheep, a man by the name of Scotty MacDougal. The ram was shot near Fort Steele in the Rockies, not in the Selkirks, in the winter of 1892-1893.  Grohman learned this from MacDougal whom he had employed in years past.  Apparently MacDougal was killed in an avalanche a few years after killing the ram and the ownership of the trophy passed to MacDougal’s partner, who sold it to Sheard.  The head even took on its own name, as all great trophies seem to do: the Tacoma Head.

As often happens with any large trophy, claims and counter-claims were made about the Tacoma head by naysayers.  In 1913 Sheard had a fire at his premises and it was thought the head was burned.  But it turned out the head had previously been sold to a wealthy East Coast family, where it stayed until the 1950s when it disappeared in an estate sale when the heirs sold and moved.  The head has not been seen since, but noted sheep biologist Dr. Raoul Valdez believes it to be authentic from studying the old photos, of which there were quite a few.

So how big is the Tacoma bighorn?  Before World War II, sheep were not measured on a total score but were ranked on their longest horn while the bases were measured as supplemental data, so unfortunately there is no way to make an exact comparison with today’s scores. Only one side of the Tacoma head was recorded, but in the photos the horns appear very symmetrical, so let us assume that both horns were identical. Taking the original measurements listed in Rowland Ward, we know the head had a longest horn of 52½ inches with 18½ bases. Studying other giant bighorn sheep measurements, it might be reasonable to assume the quarter measurements would have been 16 ½, 15, and 11 inches for the first, second, and third quarters. 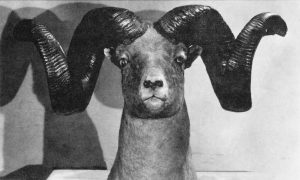 The Tacoma head is the only sheep in North America ever measured with a horn length of 50-plus inches, other than the Chadwick Stone sheep ram which was shot in 1936 in on the Muskwa River in British Columbia.

Questions have been raised about the Tacoma head’s bases recorded at 18.5 inches. In the old days, these were probably measured along the contours of the edge of the horns rather than in an even circle as is now the case.  If so, this would knock the head from 18.5-inch bases to somewhere around 16 or 17 inches, which is more likely as no bighorn measured after World War II has been recorded with bases over 17.5 inches.

Until the Tacoma head resurfaces, it will be impossible to know what its exact score is.  It is a great tragedy  it has been lost in the mists of time, but we can rejoice in the fact that modern populations of bighorn sheep produce ever bigger heads, and someday a new record bighorn may approach the measurements of this legendary ram.