Despite all the emphasis on new cartridges, this old standby is still an all-round champ.

The cartridge wars continue! The 6.5mm Creedmoor remains a hot seller. Many of us want more, so we turn to faster cartridges. We used to call them “magnums” and most of them wore belts. The belt never meant much, but I guess we over-used the word “magnum.” Now we call our fast cartridges all sorts of things: Compact, Precision, Short, Ultra, more. They’re all good. Thanks to the proliferation of chronographs, today’s data, published factory ballistics and handloading data, is very accurate. Today’s cartridges do pretty much what they’re supposed to do. 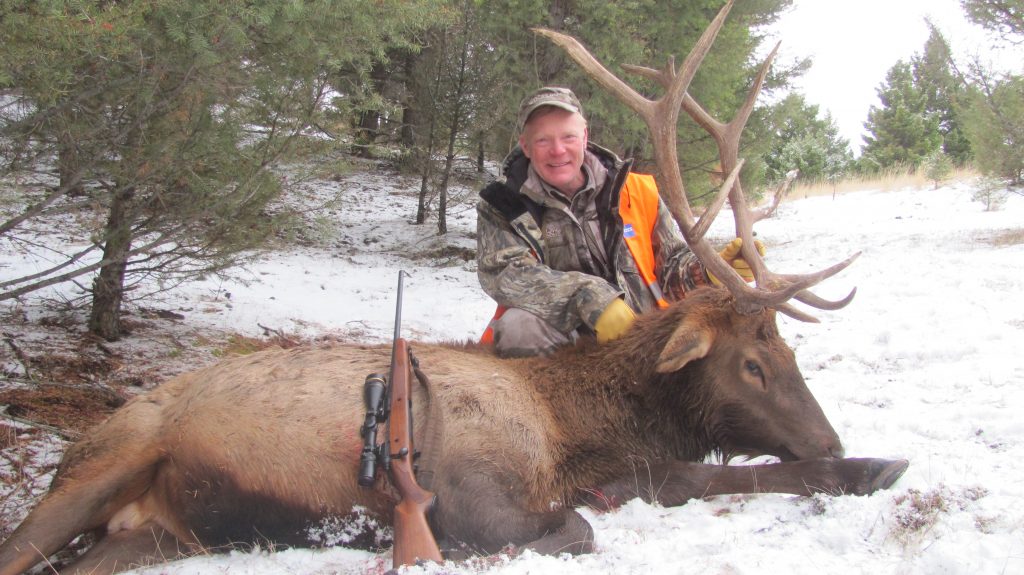 More important is to not get too caught up in hype and decide what level of performance you need, and how much recoil you’re comfortable withstanding. Performance isn’t free! The 6.5mm Creedmoor is an awesome long-range target cartridge. It is nota long-range hunting cartridge, moderate in both bullet weight and energy. It’s a fine cartridge for deer-size game, and it’s adequate for elk, but only to very medium range. The many faster cartridges project more energy farther downrange, but always at a price in increased recoil (and often action length and gun weight).

Without question long-range shooting is “in,” but not everybody wants to shoot at extreme range, and many who wish to have no business trying! Despite all the current malarkey, there is a tried-and-true veteran cartridge that performs extremely well on fairly large game as far out as most of us really shoot, and has done so for more than a century. Many of you have one, but if you don’t, I’ll bet your dad or granddad did. It is the .30-06 Springfield, properly the “Ball Cartridge, caliber .30, model of 1906.” It served us well through two World Wars and Korea, countless smaller actions, and although technically replaced by the 7.62x51mm NATO (.308 Winchester) in 1957, the .30-06 continued in various roles throughout the Vietnam conflict. Over time it became America’s most popular sporting cartridge and remains among our perennial best-sellers. Despite the dozens and dozens of newer cartridges, many of which are faster and some more efficient, the .30-06 remains one of our very best all-around choices. Jack O’Connor, champion of the .270, was also a lifelong .30-06 fan, and conceded privately that the .30-06 was “more versatile” than his beloved .270.

The .30-06 is no pipsqueak. Bullets and velocities changed over its 50-year service life, but the .30-06 was the most powerful cartridge ever adopted by a major military. Generations of recruits whined about its brutal recoil! It is an awesome deer cartridge. However, .30-06 power is not really needed for any North American deer hunting. Eleanor O’Connor, herself an especially accomplished hunter, was a 7×57 fan. She considered the .30-06 a cannon, but that’s what she chose for hunting tigers and, with a 220-grain solid, she took her elephant with a .30-06. My old friend George Parker, contemporary of O’Connor, put more Coues whitetails in Boone and Crockett than anyone else, eightbetween 1926 and 1969. A distinguished competitive shooter as well as a hunter, George told me that he wasn’t crazy about recoil. For his deer hunting he came to prefer a .25-06. For bigger game he preferred a .30-06, which he used on several African safaris and a long sojourn in Southeast Asia with his lifelong buddy Colonel Charles Askins

George Parker’s “pet” was a .30-06 Improved, body taper removed for increased powder capacity. Velocity increase with an improved chamber depends a lot on the rifle and who is doing the loading; sometimes there’s a substantial gain and sometimes not. Either way, in the rarified world of magnum cartridges the .30-06 is not a speed demon—but it is not “slow.” And its trajectory is flatter than you might think. For many years standard .30-06 loads with 180-grain bullets have yielded 2,700 fps. Guess what? That’s exactly the same velocity as the vaunted 6.5mm Creedmoor with a 140-grain bullet. Use an aerodynamic 180-grain .30-caliber bullet with a Ballistic Coefficient up into the .500 range and your trajectory will be almost the same as the Creedmoor with a 140-grain bullet. However, I can assure you the 180-grain .30-caliber bullet will hit a whole lot harder! It will also kick more, which is why I suggest that it’s not essential for deer, and why I prefer 6.5mms, .270s, and 7mms for my deer hunting.

An advantage to cartridges with long-term popularity is availability: Everyone loads .30-06 and there are hundredsof factory loads. Another advantage is continued development, both in factory ammo and handload recipes. If the .30-06 sounds too slow to you it can be juiced up a bit. In preparation for my first African safari I handloaded 180-grain Nosler Partitions to 2,800 fps. Although I used that load for years with no pressure signs, it’s no longer on today’s charts. However, depending on which manual, there are still published loads that break 2,800 fps with a 180-grain bullet. There are also extra-fast” factory loads. In their Superformance line Hornady’s 180-grain SST load is rated at 2,820 fps; their 165-grain SST is rated at 2,960 fps, edging into .300 short magnum territory. 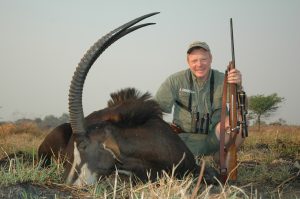 This sable antelope was taken in Mozambique with a Ruger M77 .30-06 firing 180-grain Interlock bullets. An advantage to the .30-06 is that all .30-caliber hunting bullets are intended for .30-06 velocities, so excellent bullet performance is routine.

I’ll be honest, I rarely choose the .30-06 for mountain game. However, you certainly can. O’Connor took several of his early sheep with a .30-06, as did my uncle, Art Popham—and their (and my) mutual friend John Batten. Back in the 1950s Grancel Fitz was the first person known to take all North American species. He used a Griffin & Howe Springfield .30-06, including for all four sheep. Much more recently, J.Y. Jones (One Man, One Rifle, One Land) used a battered Remington .30-06 to take all North American species, also including all four sheep. Personally, I consider mountain hunting a specialized pursuit and I think there are better tools. So, I usually use faster cartridges. Magnum .30-calibers are frequent choices, but sheep and goats don’t really require .30-caliber power, so I have also chosen faster 6.5mm, .270, and 7mm cartridges.

Obviously, the .30-06 could be used, but I think it’s better suited to somewhat larger game or situations where its versatility really shines. The .30-06 is a fantastic elk cartridge. I’ve hunted elk with a lot of cartridges from .270 upwards, but I’ve taken more bulls with the .30-06 than anything else. It hits hard, and has all the range I really need. One subzero day in northern Colorado I crawled in to about 125 yards and shot a medium-sized 6×6 on the shoulder with a 180-grain Barnes X. The bull dropped so hard it bounced and never moved. Another time, in Montana, I had a tough downhill shot at about 350 yards which, despite all the stuff, is not a close shot. The .30-06 came through just fine!

I’ve used the .30-06 on all the continents, but where it really shines is in Africa because: 1) You never know what you might run into. The .30-06 handles all the non-dangerous species just fine, from very small all the way up! The exception is eland, but a .30-06 with a good bullet will handle an eland. 2) Long-range shooting as we think of it is very rare in Africa; the .30-06 shoots plenty flat enough for any African hunt or area I’ve experienced. 3) On the typical plains game safari you may shoot every day, and sometimes a few times a day. Recoil can be cumulative! A hard-kicking .300 may be fine on a one-animal hunt, but unless you’re really comfortable with it, daily shooting can be a different deal. 4) In my opinion the .30-06 is perfect for leopard, and in my experience more effective than larger cartridges like the .375s, which are better-suited for much larger game. 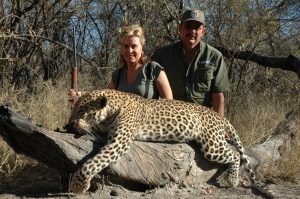 Donna Boddington and PH Dirk de Bod with a fine leopard, dropped “dead under the tree” with a 180-grain Interlock from a Ruger .30-06. Boddington believes the .30-06 is perfect for leopard, and more effective than larger cartridges.

Now, to be absolutely fair and impartial, everything said about the .30-06 can be equally applied to the .308 Winchester. Because of greater case capacity, the .30-06 runs at least 100 to 150 fps faster than the .308 with all bullet weights, the gap widening with heavier bullets. So, the .30-06 shoots flatter and delivers more energy. Most game animals won’t notice the difference. The .30-06 also kicks more, requires a longer action, and on average isn’t quite as accurate. I prefer the .30-06, but if you prefer the .308 you won’t get any argument out of me. 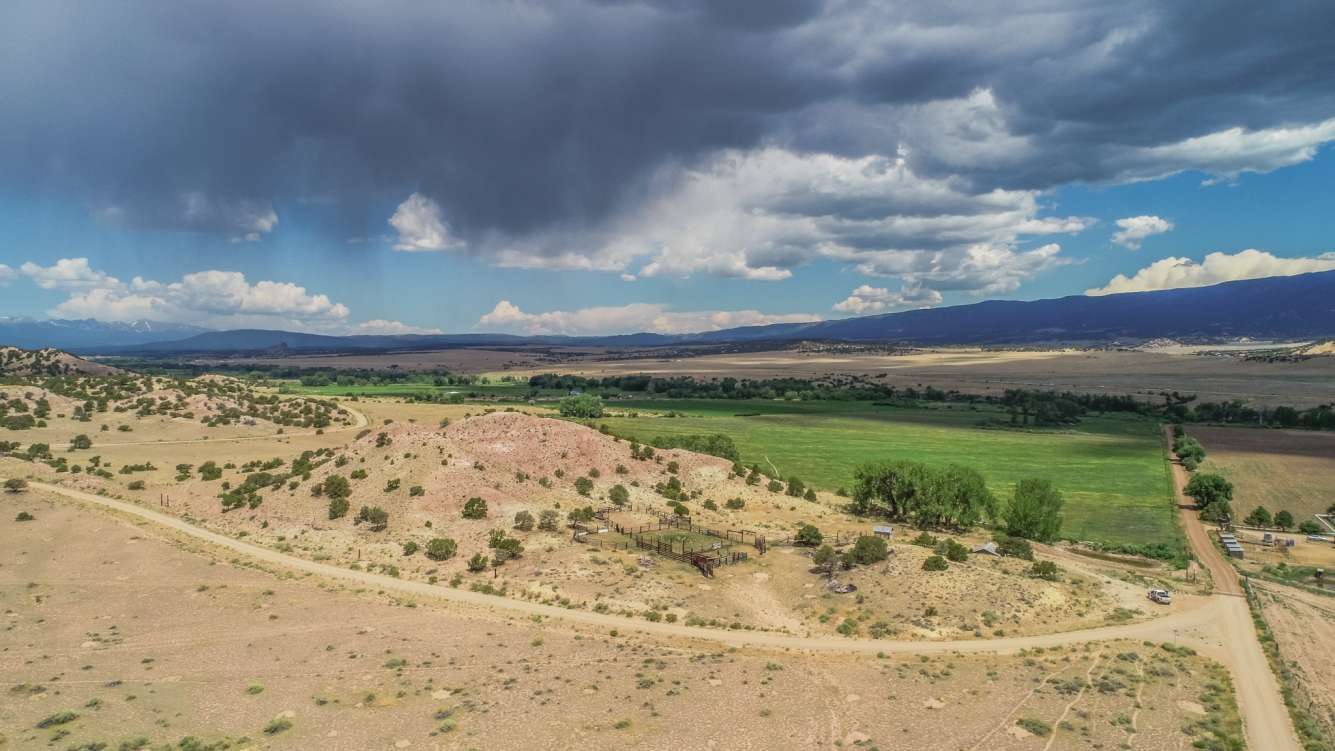 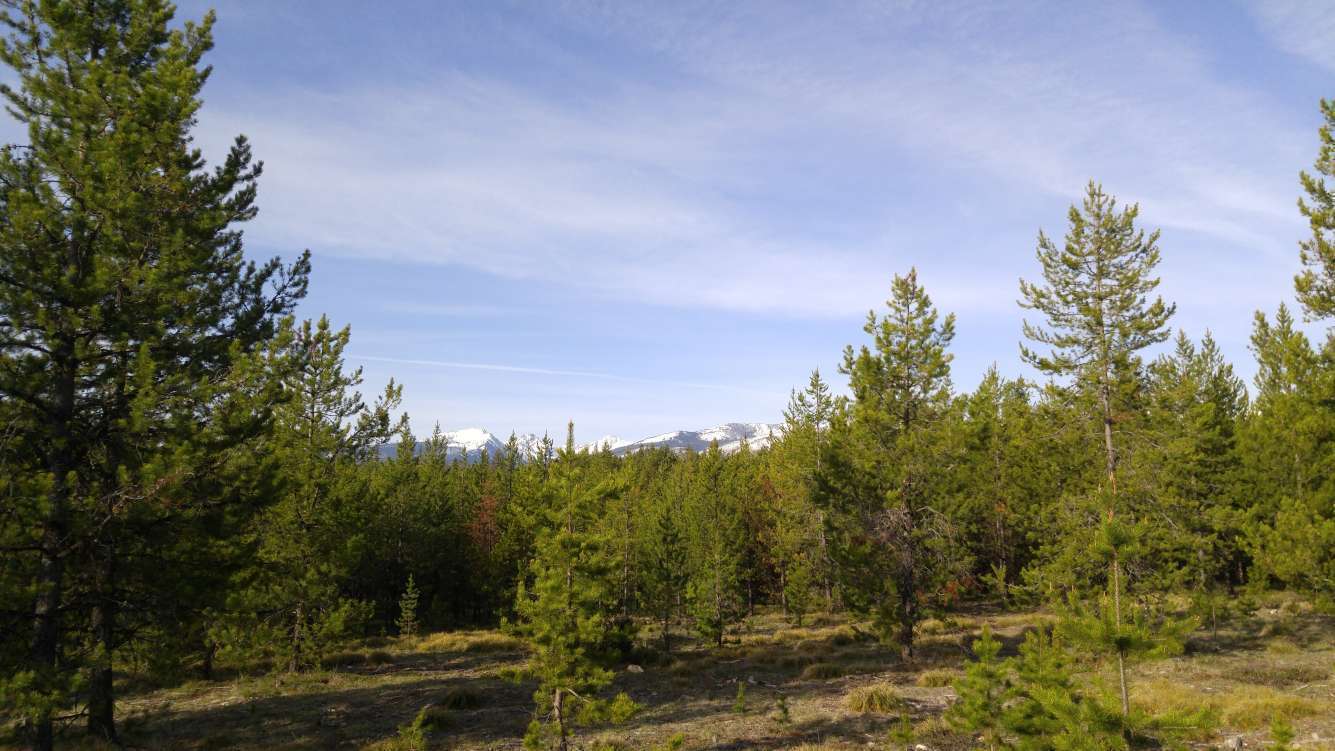