The Story of Sports Afield

The oldest outdoor publication in North America, Sports Afield was founded in 1887 by Claude King. The first issue, in January of 1888, was eight pages long and printed on newspaper stock, out of Denver, Colorado.

The “Journal for Gentlemen” promised, in King’s words, “To be devoted to hunting, fishing, rifle and trap shooting, the breeding of thorough-bred dogs, cycling and kindred sports…” The subscription price was $1.50 per year, with single copies selling for 15 cents.

A few years later, King expounded on his philosophy: “Sports Afield—has an ambition above that of simply entertaining and amusing the public; it wants to help propagate the true spirit of gentle sportsmanship, to encourage indulgence in outdoor recreations and to assist in the dissemination of knowledge regarding natural history, photography, firearms, and kindred subjects.”

Before the decade was out, Sports Afield had expanded and moved its operations to Chicago. The magazine grew quickly, with some issues running 96 pages. It soon became not only a voice of the West, but a spokesman for hunters, fishermen, campers, and shooters across the USA. Other magazines—including some current competitors—entered the market, but Sports Afield’s commitment to strong, intelligent outdoor writing separated it from the pack.

By 1927, when King stepped down as editor and turned the reins over to Joe Godfrey, Sports Afield was in full stride. Zane Grey started writing for the magazine, as did Jimmy Robinson, beginning a 60-year association with the publication. In 1930, Ivan B. Romig and his associates took over Sports Afield, combined it with a smaller publication—Trails of the Northwoods—and moved the offices to Minneapolis. A string of editors worked the helm of Sports Afield, which struggled during the Depression years to stay afloat. It did, and by 1934 the magazine was again in the black.

Long before conservation issues became politically correct, Sports Afield was speaking out, trying to make the public aware of environmental concerns. Its credo: “We believe in sane conservation, we oppose pollution, and stand for the enforcement of our game laws.”

More quality writers appeared toward the end of the 1930s: Gordon MacQuarrie and Archibald Rutledge were just two of many headliners. Many followed through on the conservation theme. The circulation rose to 250,000, and the magazine topped the 100-page mark. Nash Buckingham started writing during World War II, a time when citizens looked to Sports Afield as an escape from the trying times—and when, overseas, GIs read the magazine to remind them of home.

In 1945 Ted Kesting, an associate editor of Country Gentleman magazine, was hired as editorial director and brought from Philadelphia to Minneapolis. His assignment was to expand and modernize the venerable Sports Afield. At 26 years of age, he was the youngest editor of a major national publication in the USA.

Kesting soon discovered there was a sameness to all of the major outdoor magazines: many topics were similar each month, photos were poor, good writers rare. To set Sports Afield apart, Kesting signed up more solid writers. One he brought on board was angling editor Jason Lucas, whose writings about bass fishing became legendary. Another was mystery writer Erle Stanley Gardner, who became known for his articles defending gun owners and hunters’ rights. By October 1948, Time magazine reported that “Sports Afield has become the biggest of all outdoor monthlies. Last week it put to bed a November issue that would go to 800,000 customers, a record for its 61 years. Colorful as a hatband full of flies, it was filled with picture stories and crackling adventure stuff…”

In 1953 the publishing giant Hearst Magazines tendered an offer to Walter Taylor, the publisher. It wanted the best magazine in the expanding outdoor field and offered to buy it, providing Kesting and his staff came along. The sale was made, and Sports Afield moved its offices to New York City.

Meanwhile, the magazine continued to grow, attracting such writers as Col. Townsend Whelen, Jack Denton Scott, and Russell Annabel. Circulation hit the 1,100,000 mark in 1961. By the late 1960s, Homer Circle, Tom Paugh, and Zack Taylor had joined the ranks. The cover price jumped from 35 to 50 cents a copy.

In 1970 Kesting announced he was stepping down as editor and named Lamar Underwood as his replacement. Under Underwood’s guidance, the likes of Gene Hill, Nick Lyons, Vance Bourjaily, and John Madson all appeared in the periodical’s pages. The Almanac came into existence in 1972 and was an immediate hit with readers.

Eventually, Underwood moved on, to be replaced by saltwater fishing editor Tom Paugh. The Paugh years saw major redesigns, plus a downsizing in circulation as the magazine adjusted to the competitive times. Grits Gresham, Thomas McIntyre, Ted Kerasote, and Anthony Acerrano all brought their expertise to the magazine, which continued to publish not only exciting adventure stories mixed with well-informed how-to-do-it pieces, but to comment on conservation issues as well.

As Paugh stated in his “Adventures in Editing” column in October 1987, the issue that commemorated the 100th anniversary of the founding of the magazine, “You have our promise to bring to you each month the best of what the world of hunting and fishing has to offer.” Paugh kept that vow until his retirement in 1994, when a new editor and publisher, Terry McDonnell, came from Esquire magazine and led Sports Afield into its second century.

When McDonnell moved on late in 1997, the magazine entered the most difficult period in its long history. Hearst executives, deciding that traditional outdoor sports were no longer politically correct, initiated a move to shift the magazine’s focus from hunting and fishing to hiking, mountain biking, camping, and other “non-consumptive” outdoor sports. However, the gambit failed, and in the summer of 2000, Hearst sold the magazine to publishing magnate Robert E. Petersen, who subsequently moved the magazine’s offices to the Los Angeles area.

Editor Chris Dorsey returned the magazine’s editorial content to hunting and fishing and the new owners undertook an effort to restore the broad-based readership of a large-circulation sporting magazine. But this proved quite difficult, and in June 2002 Petersen published his last issue. The magazine then ceased publishing for several months. Still, without the strong two-year effort made by Petersen to revive the Sports Afield brand and refocus its content on hunting and fishing, the magazine would likely not have survived to find a buyer who would help it find its modern-day niche.

In the summer of 2002, the owners of Safari Press, a successful Huntington Beach, California, publishing company specializing in high-end hunting and firearms books, purchased Sports Afield. The new owners realized that things had changed dramatically in the world of magazine publishing. American sportsmen, with ever-decreasing amounts of time on their hands, tended to focus their efforts on certain aspects of the sporting world rather than being the outdoor generalists their fathers and grandfathers had been. With that shift had come the rise of specialized niche magazines catering to smaller but highly interested and motivated audiences. One niche that was not being served—and that Sports Afield, with its long history of high-quality adventure writing fit nicely—was that of the traveling big-game hunter.

Hiring Diana Rupp, an experienced editor and hunter, to implement their vision for the publication, the new owners re-launched the magazine in April 2003 as a high-quality, high-end magazine focusing solely on big-game hunting adventure. The “new” Sports Afield was an immediate hit with readers and continues to strengthen and grow. The magazine celebrated its 125th anniversary in 2012. Building on its long history, Sports Afield has once again established itself as a leading hunting magazine for the new century.

— By Jay Cassell and Diana Rupp 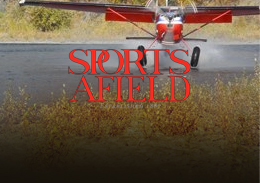 Our History Founded in 1887 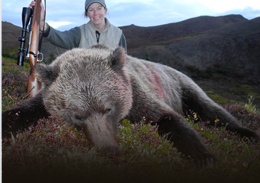 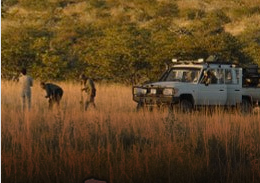 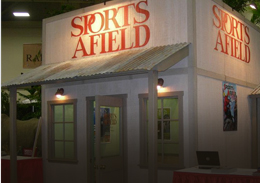